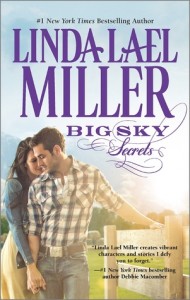 Self-made tycoon Landry Sutton heads to Hangman Bend’s Ranch to sell his land to his brother Zane. Though he’s got cowboy in his blood, Landry plans to return to city life before the dust even settles on his boots. Of course, he didn’t count on falling for Big Sky Country…or Ria Manning.

Ria’s starting to settle into country life herself…until she has a close encounter of the terrifying kind with a buffalo. Turns out the peeping monster belongs to the cowboy next door—and he has her running even more scared than his bison. She wants a home where the buffalo don’t roam, and the men don’t either. Could Landry’s homecoming be her heart’s undoing?

Big Sky Secrets is the last book in Miller’s Parable Montana series. I’m both sorry to see it end and looking forward to her next series, The Brides of Bliss County, starting in May 2014.

Of course, I’m also looking forward to May, but that’s an entirely different thing.

I’m going to miss catching up with the citizens of Parable. Not just because I’ve enjoyed the vicarious thrill of reading about every single one of their romances, but also because it seems like a really nice place and they seem like terrific people. It’s been great to find out how everyone is doing in each new book. It’s sad to let them go. 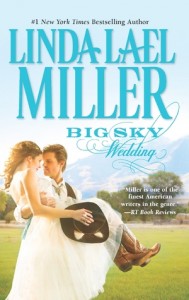 But the last two books, Big Sky Wedding and Big Sky Secrets, haven’t felt quite as, well, big as the first four books, so maybe it’s time for me to meet a new set of friends.

Not that these last two stories haven’t still been worth reading. They most certainly have. Check out my review of Big Sky Wedding if you don’t believe me.

Big Sky Secrets picks up where Big Sky Wedding left off, only it’s Landry Sutton this time instead of Zane Sutton. Still, the Suttons are relative newcomers to the Parable/Three Trees community, even though Zane has married Brylee Parrish, one of the main characters from the beginning of the series.

Landry originally came to Parable to convince his brother that the whole idea of settling down in the middle of nowhere Montana was a crazy idea, and ended up staying himself. It turned out that the “big sky country” was where they both belonged, after lives that had been rootless.

It was also the place that Ria Manning had come to call home, after her fireman husband died in the line of duty.

Unfortunately, or perhaps fortunately, for both Landry and Ria, his ranch and her flower farm were on neighboring acreage. If fences make good neighbors, their relationship needed a bit of work. His buffalo herd, all two of them, loved Ria’s flowers–to eat.

After a year of repeated invasions, Ria had not lost her dislike of Landry. But Landry finally decided that it was time to force the issue, because he figured out what Ria’s issues with him were really all about (besides the obvious ones about the buffalo eating her crops!)

She was just as interested in him as he was in her, but she didn’t want to admit it. Or maybe she just wasn’t ready to admit that she’d moved on after her husband’s death. But Landry was determined to find out.

Whether Ria was ready to be found out or not.

Escape Rating B: Like many of the stories in the Parable Montana series, Big Sky Secrets swirls around the sweet and slow building romance between Ria Manning and Landry Sutton. Although the tension between them is palpable from their very first buffalo-facilitated encounter (in fact, it started in Big Sky Wedding) their romance generally simmers through most of the story.

While the reader waits for that pot to come to the boil, one is very happily entertained by a story about the bonds of family; how they sometimes tie, and sometimes strangle.

Ria’s tense relationship with her half-sister Meredith gets further stressed when her 17-year-old niece Quinn hitchhikes her way to Parable in a show of much-needed defiance against Meredith’s attempt to pack her out of the way while a federal investigation descends upon her formerly pristine life.

Quinn belongs in Parable, but the teenage invasion makes Ria realize how empty her solitary life has been.

Landry’s life is invaded by his drifter father, with his hand out for another “loan” that will never be repaid. But Jess Sutton delivers some home truths that make Landry rethink his strained relationship with his brother Zane.

Both Ria and Landry need to resolve the way they feel about their families, before they can be ready for each other. And once they’re ready, wow!