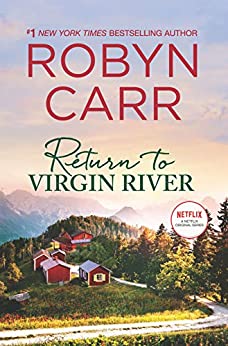 
bestselling author Robyn Carr returns to the beloved town of Virgin River with a brand-new story about fresh starts, new friends and the magic of Christmas.

Kaylee Sloan’s home in Southern California is full of wonderful memories of the woman who raised her. But the memories are prolonging her grief over her mother’s recent death. A successful author, Kaylee hoped she could pour herself into her work. Instead she has terrible writer’s block and a looming deadline.
Determined to escape distractions and avoid the holiday season, Kaylee borrows a cabin in Virgin River. She knows the isolation will help her writing, and as she drives north through the mountains and the majestic redwoods, she immediately feels inspired. Until she arrives at a building that has just gone up in flames. Devastated, she heads to Jack’s Bar to plan her next steps. The local watering hole is the heart of the town, and once she crosses the threshold, she’s surprised to be embraced by people who are more than willing to help a friend—or a stranger—in need.
Kaylee’s world is expanding in ways she never dreamed possible. And when she rescues a kitten followed by a dog with a litter of puppies, she finds her heart opening up to the animals who need her. And then there’s the dog trainer who knows exactly how to help her. As the holidays approach, Kaylee’s dread turns to wonder. Because there’s no better place to spend Christmas than Virgin River.

The story in Return to Virgin River is all about Kaylee Sloan’s, well, return to Virgin River. But Kaylee was never a resident of that much-loved little town. Rather, Kaylee was an occasional visitor during her childhood, and her most recent visit was ten years in the past, during a previous crisis in her life. Because Kaylee has never really been a part of this community when she returns to Virgin River less than a year into her mourning for her beloved mother, she makes an excellent point of view character to introduce new readers (like me) to this well-loved place and series.

As Kaylee is introduced to everyone who has come to, or come back to, live in this lovely little place, we get to meet them for the first time along with her. For readers who have been here before, It’s undoubtedly lovely to catch up with old friends from previous books in the series.

But Kaylee’s advent makes this a great place for new readers to jump in without feeling like they missed the plot. I knew these people had history, as one does whenever one is introduced to new people in real life, but I didn’t feel like I had missed something important to this story by not knowing everyone’s past.

This turned out to be a great way of getting involved in Virgin River, right along with Kaylee. 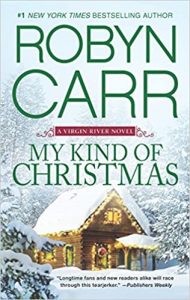 And for any long-term readers who may have lost track of everyone in the 8 year hiatus since the previous book in the series, My Kind of Christmas, Kaylee’s arrival in town should serve as a great way to get caught back up!

Kaylee returns to Virgin River because she needs a long, quiet, productive getaway. She inherited her mother’s house, and has been living there since her mother’s death. She and her mom were very close, best friends, and Kaylee feels surrounded by her grief in that house – no matter how much she loves it.

Kaylee makes her living as a mid-list author of suspense thrillers, and she has a book on contract that is not merely due but overdue. She hasn’t been able to write since her mother’s diagnosis, but she has to get her own life on track in order to support herself. She has a cushion, but it isn’t infinite.

She arrives to find her planned six-month rental house on fire. Literally on fire. She can’t go home because she’s rented out her own house until after New Year’s – and it’s currently AUGUST. She feels both overwhelmed and stuck.

And that’s where her life takes its unexpected turn. As one door closes – or catches fire – another door opens. The door to Landry Moore’s guest house.

As Kaylee’s life opens up and fills up, between her rescue of the orphaned kitten Tux, the abandoned dog Lady and her puppies, and everyone in the welcoming town of Virgin River – especially her handsome landlord – Kaylee discovers that her grief for her mom, while it hasn’t exactly gotten less has become a less all-consuming part of her much-expanded life.

And that those we love never leave us, not even when they’re gone.

Escape Rating A-: There’s definitely a life imitates art imitates life thing going on here. Kaylee is supposed to be writing a suspense novel – which she eventually manages to do. But she also begins a kind of fictionalized journal or a contemporary romance/women’s fiction novel, which is also the category that Return to Virgin River fits into.

Kaylee’s novel-of-her-heart is a story about a woman who comes to a small town for a fresh start after a death in HER family. Her fictional character falls for her equally fictional landlord – except that neither of them actually is. Fictional, that is. Kaylee pours her growing feelings for Landry into her character’s growing feelings for “Landon”. The disguise is adorably cute and rather “paper” thin. But fun and a great way for Kaylee to process both her hope and her grief.

But the course of true love never does run completely smooth, and in this story the waves are provided by Landry’s long-absent wife. Yes wife. He and Laura have lived apart for 10 years of their 11-year marriage, but neither of them ever bothered to file for divorce.

So naturally, just as Landry realizes that he wants a divorce so that he can become more involved with Kaylee, Laura decides that her acting career, the reason for their separation, isn’t going anywhere and that she wants Landry – or at least the security he can provide – back.

I have mixed feelings about this plot thread. Something had to derail what would have otherwise been Landry and Kaylee’s straightforward amble towards domestic bliss. But the Laura angle felt particularly tacked-on. It was so obvious that she only wanted the security, to the point where not even Landry took her “act” all that seriously. 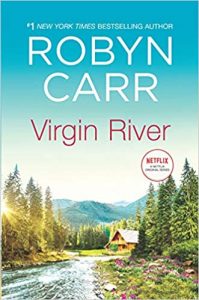 On the surprising but definitely plus side of the reading equation, Return to Virgin River turned out to be an unexpectedly poignant counterpart to yesterday’s book, Millicent Glenn’s Last Wish. Both stories are about mothers and daughters, but Kaylee and her late mother had the kind of mother-daughter relationship that Millicent and Jane had stopped dreaming of long ago. These two stories make a great back-to-back read if you are well-prepared with plenty of tissues.

Closing on a much happier note, I enjoyed my first trip to Virgin River and now that I’ve met everyone, I’ll be back. Whether by starting at the very beginning with the first book in the series, Virgin River, continuing on with the next whenever it comes around, or maybe BOTH!

I’m giving away a copy of Return to Virgin River to one very lucky US commenter on this tour!