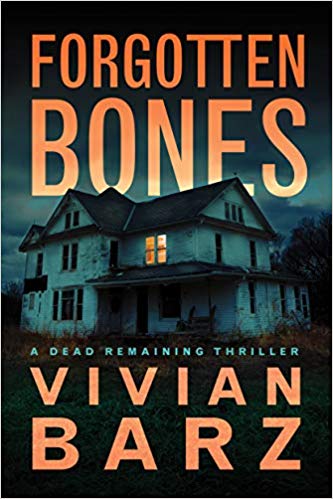 An unlikely pair teams up to investigate a brutal murder in a haunting thriller that walks the line between reality and impossibility.

When small-town police officers discover the grave of a young boy, they’re quick to pin the crime on a convicted felon who lives nearby. But when it comes to murder, Officer Susan Marlan never trusts a simple explanation, so she’s just getting started.

Meanwhile, college professor Eric Evans hallucinates a young boy in overalls: a symptom of his schizophrenia—or so he thinks. But when more bodies turn up, Eric has more visions, and they mirror details of the murder case. As the investigation continues, the police stick with their original conclusion, but Susan’s instincts tell her something is off. The higher-ups keep stonewalling her, and the FBI’s closing in.

Desperate for answers, Susan goes rogue and turns to Eric for help. Together they take an unorthodox approach to the case as the evidence keeps getting stranger. With Eric’s hallucinations intensifying and the body count rising, can the pair separate truth from illusion long enough to catch a monster?

Forgotten Bones is definitely not a book to be read with the lights off. Or alone in the middle of the night. Or anyplace where it can feel like the creepy-crawlies might be closing in.

This one sits at the intersection between mystery/thriller, horror and paranormal – and that’s not a comfortable place to be in the dark. It’s a fascinating place, in the thrills and chills kind of way, but not exactly comfy or cozy.

A place to get really, really to get sucked into – but absolutely not cozy. Unless you like to cozy up to claustrophobia.

There are two protagonists in this story. One seems fairly typical for the genre, but the other is definitely not. And that’s part of what makes the story so fascinating.

Perrick, California is a small town, and Susan Marlan is a member of its equally small police force. She’s relatively young, still pretty gung-ho about policing and crime solving, and kind of stuck.

Not that she can’t leave, but that the police chief is also her mentor – and he’s just weeks shy of retirement. There might be promotions in the inevitable shuffling in the wake of his departure. And Perrick is her home.

We’ve seen Susan’s type before in plenty of mysteries. She’s the young investigator who just can’t let go when a big crime – with its attendant opportunities for recognition and promotion – drops into her lap. So of course she goes out on her own, against orders and definitely off the books, to try to solve the case before the FBI. Or perhaps in spite of the FBI, as she’s sure the neat and tidy solution they finally come up with isn’t all there is.

And there needs to be plenty. Because the crime that has been uncovered under the soil of tiny Perrick becomes known as the “Death Farm”. Twenty-plus bodies have been hiding under a local farm, bodies going back decades. All – but one – children. Young children. Decades of dead little boys and girls.

Susan feels compelled to find the killers – because the FBI find one but not his partner.

Eric Evans is compelled too, but he’s compelled by the dead. He’s just arrived in Perrick to teach at the local community college after his life derails in Philly.

Eric is extremely lucky that he couldn’t possibly have been the perpetrator or any of the murders, because if he were he would have been the FBI’s best suspect. Eric was diagnosed with schizophrenia years ago. He manages his condition with medication, and he’s mostly successful. He’s high functioning, to the point of being a good teacher, a decent drummer and completely capable of forming friendships and relationships and making a good life for himself.

But something about Perrick is sending him off the rails, or so it seems at first. The dead invade his dreams – and his waking life. The dead children from that farm. When he can’t pretend that the visions are just dreams, he tries to believe that they are just a symptom of his illness.

In the end, he teams up with Susan. She’s compelled to find the truth. He’s compelled to bring that truth to light to get those children out of his head, his house and even his classroom before someone decides that he’s even crazier than he actually is.

Or someone decides that Susan and Eric need to be the final victims.

Escape Rating B+: The crime in this story, the multi-year, multi-victim murder spree, is not unprecedented. There have been real-life cases where “death farms” have been discovered, to the nightmares of investigators and local residents alike, after an event uncovers one or a few of the bodies.

(I’m particularly thinking of the case of Belle Gunness in LaPorte County Indiana, which is indelibly imprinted on my brain. I was attending a dinner meeting and the post-dinner speaker gave the assembled – and rather startled – diners a fascinating but stomach-churning talk about her murder spree and discovery – complete with pictures. And I’m finding myself wondering what the post-lecture bar tab turned out to be…)

Susan Marlan is not an atypical investigator in a case – or story – like this one. The young cop going a bit rogue because she (or he) knows that the powers-that-be – the FBI in this case – are willingly overlooking something because it interferes with their neat theory. And because they want to go back to their big city home office and get out of tiny wherever.

And because someone local misdirects the out-of-towners for usually underhanded reasons of their own – as happens in this case. That the reader has a handle on who the perpetrators are long before the FBI – and even somewhat before Susan – does not detract from the compelling readability of the story.

Because this is a case where Susan’s actions and reactions in the face of that discovery are more important than the discovery itself.

What makes this tale rise above its stock characters is Eric Evans. The story does not fall into the trap of making Eric an obvious suspect so that he has to find the killer to get himself out of the frame. That would have been an easy way to go, and the story is much better for not going there.

It also feels like it treats his mental illness sympathetically and realistically – as well as his reactions to it and people’s reactions to him. That Susan is able to accept both his help and him is what powers this book into the opener of what could be a fascinating series. Hidden Bones will come to light this time next year. I’ll be looking for it when I want some creepy chills to go along with my mystery thrills.

I’m giving away a copy of Forgotten Bones to one lucky US/CAN commenter on this tour!