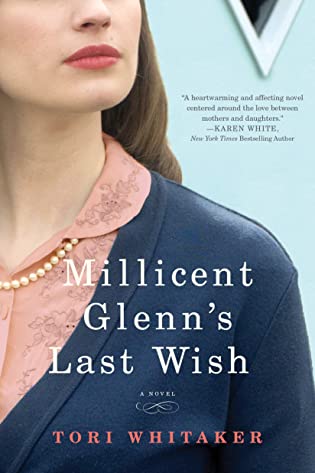 Three generations of women—and the love, loss, sacrifice, and secrets that can bind them forever or tear them apart.
Millicent Glenn is self-sufficient and contentedly alone in the Cincinnati suburbs. As she nears her ninety-first birthday, her daughter Jane, with whom she’s weathered a shaky relationship, suddenly moves back home. Then Millie’s granddaughter shares the thrilling surprise that she’s pregnant. But for Millie, the news stirs heartbreaking memories of a past she’s kept hidden for too long. Maybe it’s time she shared something, too. Millie’s last wish? For Jane to forgive her.
Sixty years ago Millie was living a dream. She had a husband she adored, a job of her own, a precious baby girl, and another child on the way. They were the perfect family. All it took was one irreversible moment to shatter everything, reshaping Millie’s life and the lives of generations to come.
As Millie’s old wounds are exposed, so are the secrets she’s kept for so long. Finally revealing them to her daughter might be the greatest risk a mother could take in the name of love.

“Mirror, mirror on the wall: I am my mother after all.” There are whole Etsy shops devoted to pillows and wall hangings and samplers with this quote. It’s the title of a 2011 memoir by Susan Kane Ronning that revolves around a daughter’s resistance to repeating her mother’s mistakes.

And Kelsey’s soon-to-be child, gender still unknown, who will make her, at 91, a great-grandmother. A child that all three women are over the moon about, regardless of the stresses in the relationship between them.

Stresses that lie in the past, in the secrets that are hidden in that past. Secrets that Millicent has held close to her heart and grieved over for decades, but that finally need to come into the light. She is, after all, 91, and feels every single one of those years. She’s afraid that if she doesn’t talk soon, her chance will be gone.

And she’s right, but not in the way that she expected. Because secrets come to light on their own time – no matter how much their keepers wish otherwise.

Escape Rating A-: First, this is a timeslip story, or perhaps it might be better described as a memory story. It operates in two timelines; its 2015 present and Millicent’s past in the late 1940s and 1950s, as she replays in her head the history that she has not shared with her daughter and granddaughter – and that she needs to rather desperately.

Initially, Millicent is desperate because of her own circumstances. At 91, even though she is healthy and active for her age, she can’t help but be aware that her time is running out. When Jane admits that she has discovered a lump in her breast, Millicent is suddenly faced with a more immediate threat. Her daughter, like Millicent’s husband, could have cancer. That fear overlays this story like a sword of Damocles.

Through Millie’s memories, we get glimpses of why that is, although not the full story. The full story we do get is the story of women’s lives in the 1950s, the stresses and strains that led to Betty Friedan’s watershed book, The Feminine Mystique, the book that showed that so many women’s lives, lives that seemed perfect on the surface, were restricted in a straitjacket of competitive domesticity, and filled with frustration, boredom, tragedy and all too often, pills and/or booze.

Millie holds the tragic secrets of her own experience close, perhaps a little too close, just as she did Jane when she was growing up. At least some of the time. The rest of the time, Millie left her daughter to her own devices as she worked her way through her grief, her despair, and the pills she took to cope with both.

When the secrets finally come out, the catharsis is both extended and delayed, as they still have to navigate through Jane’s health scare and Kelsey’s advancing pregnancy. In the end, there is healing – but it’s hard won and painful. The band aid over the past that Millie wanted to ease off gently gets pulled off with a hard jerk – and Jane thinks her mother was one.

And perhaps she was.

I ended up with a whole truckload of mixed feelings about this story for all sorts of personal reasons.

I think that people who don’t live somewhere storied or famous or both, like New York City, don’t expect to see their hometown portrayed in fiction. Millicent’s story takes place in Cincinnati, where I grew up. Millicent would have been part of my mother’s generation, and the Cincinnati she remembers from the 40s and 50s match stories my mother told me, or echo things that I remember being told were in the recent past when I was growing up in the 1960s.

If you are ever in Cincy, Union Terminal is every bit as magnificent as it is portrayed in the story, and well worth a visit for its museums and its gorgeous restoration. It was a building that needed to be preserved, but for most of my growing up years it was a white elephant that the city couldn’t find a purpose for. It was a relief when the museum complex moved in and turned out to be a fantastic use for the space.

But the Cincinnati described in the story is the place I remember. As much as I say that Cincinnati is a nice place to be FROM, I was happy to see the author do it proud. Although I still prefer Skyline Chili to Empress (or Gold Star),  Cincinnati chili really is ordered as described and they are all a taste of home, along with Graeter’s Ice Cream, which is still the best ice cream I’ve ever had.

Part of the poignancy of this story, at least for me, was how much the relationship between Jane and her mother Millie reminded me of the stresses and strains in my own relationship with my mother, although the causes were different. But that emotional distance, that chill that happens between two people who love each other but can’t quite reach each other was extremely real, and even cathartic that they managed to find a peace together that my mother and I never quite did.

This is a beautiful, heartbreaking and ultimately heartwarming story about four generations of women, the secrets that kept them apart and the truths that finally brought them together.

I’m giving away a copy of Millicent Glenn’s Last Wish to one very lucky US commenter on this tour!