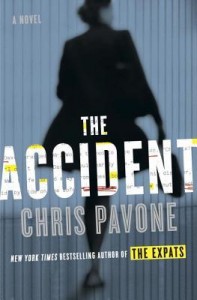 As dawn approaches in New York, literary agent Isabel Reed is turning the final pages of a mysterious, anonymous manuscript, racing through the explosive revelations about powerful people, as well as long-hidden secrets about her own past. In Copenhagen, veteran CIA operative Hayden Gray, determined that this sweeping story be buried, is suddenly staring down the barrel of an unexpected gun. And in Zurich, the author himself is hiding in a shadowy expat life, trying to atone for a lifetime’s worth of lies and betrayals with publication of The Accident, while always looking over his shoulder.

Over the course of one long, desperate, increasingly perilous day, these lives collide as the book begins its dangerous march toward publication, toward saving or ruining careers and companies, placing everything at risk—and everyone in mortal peril. The rich cast of characters—in publishing and film, politics and espionage—are all forced to confront the consequences of their ambitions, the schisms between their ideal selves and the people they actually became.

The action rockets around Europe and across America, with an intricate web of duplicities stretching back a quarter-century to a dark winding road in upstate New York, where the shocking truth about the accident itself is buried.

Gripping, sophisticated, layered, and impossible to put down, The Accident proves once again that Chris Pavone is a true master of suspense.

The Accident is a gripping, stunning page-turner about the cost of secrets that are too dangerous to be revealed; and about who gets to decide what those secrets are.

It’s also about the publishing industry, how the changes in the way that books are sold (and not sold) affects the immediate futures of the folks who used to be some of the more important cogs in the system, and who are increasingly seeing the careers that they loved disintermediated out of existence.

Writers are discovering that it is possible to have a lucrative career without either a New York publisher or an agent to negotiate rights and contracts with that no-longer-needed New York publisher. The agents and publishers are a dying breed.

Which doesn’t mean that one big blockbuster book can’t stave off economic disaster for an agent and a publisher, providing they can get the book to market. And providing that the story inside isn’t too hot for anyone to handle.

The Accident is a “story within a story”, because The Accident is the title of the book that gets delivered to agent Isabel Reed anonymously. The book will be a blockbuster, as the story it tells will topple both a worldwide media empire and expose that the CIA was complicit in exposing foreign officials to corruption charges for the financial gain of one of its operatives. That operative being the head of the aforementioned worldwide media empire.

Charlie Wolfe built up his Rupert Murdoch-type news and entertainment empire by getting the CIA’s permission to knock out his competition. Someone is determined to make sure that Charlie’s secrets are exposed before he runs for political office. Unfortunately for Charlie, the man he thought must be the author of “The Accident” has been dead for six months. Since he can’t find the author, he’ll settle for destroying all the copies. And the CIA agent he hires doesn’t seem to mind leaving a trail of bodies in place of the manuscripts.

Or is there anything about this book and the people involved with it as they seem?

Escape Rating A+: This story is the ultimate in break-neck pace suspense. The entire thing takes place in a single 24-hour period, from the point where Isabel Reed receives her copy of the manuscript, until the point where the race is over. Or is it?

Isabel knows that “The Accident” is a book that will not just revive her career as an agent, but give her the chance to start her own company–if she can hang on to it. She drags in her best friend and editor, trying to keep the circle of information as close as she can, but the secret is already out.

Every other person who touches the manuscript becomes collateral damage in the coverup.
It’s amazing that the conceit of the story being a single day works; we’re rocketed through events as Isabel figures out what she has, what it can do, and how much trouble the damn thing is. At the same time, we see events from ex-CIA agent Hayden Gray’s perspective, as he attempts to contain the damage that Isabel and the book will cause.

Neither of them wants to be in the positions they find themselves, but they can’t find a way to get out of the labyrinth. Or do they?

The end will keep you guessing long after you’ve finished The Accident.

The author is giving away a hardcover copy of The Accident to one lucky winner. To enter, just fill out the rafflecopter.

11 thoughts on “Review: The Accident by Chris Pavone + Giveaway”