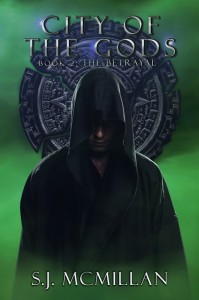 Centuries ago, Damian was betrayed by his best friend, fiance, and the Gods of his civilization. He vowed vengeance against them all. He studied and mastered the dark arts. All he needed after that was patience… Damian’s ex, Vivian, now feels like her world is crashing down around her. His curse is threatening her brother Tristan’s life. The only way to save him is to trust a stranger who saved her from a fate worse than death. Marcus had no idea saving Vivian’s life would put him in the middle of an ancient battle between good and evil. All he has to do is figure out which side he’s fighting for.

Saying “The Betrayal” makes it seem like there’s only one. In this second book of the City of the Gods series, (see review of book 1, The Descendant, for more details) there are many, many betrayals. At some point in the past or present, it seems as if every character has betrayed everyone else.

That doesn’t mean that some of those reversals weren’t justified, but right and wrong are often in the eye of the beholder. When your civilization is dying, it can seem like everyone is out to get you, even your friends. 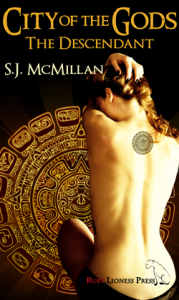 This story picks up where The Descendant leaves off, and it is necessary to read the first book in order for this story to make sense.

What we have are the survivors of the Aztecs hunting for the evil priest who caused most of their problems way back when. In the first book, the lines between friends and enemies are clear-cut; in this new installment, all the relationships blur with the introduction of new friends and enemies.

It started out clearly; Kat was the Redeemer, prophesied to bring the former High Priest to divine justice. Tristan was her fiance, and Sabine and Vivian were Kat’s teachers and guardians. Vivian’s former fiance Damien was the face of evil.

Nothing stays the same. Damien dies, somewhere unknown, and his last magic trick is to force Tristan to live through all his evil memories. Tristan is in danger of becoming the enemy.

Vivian is their healer. She has the power and skill to get Damien out of Tristan’s soul, but in order to do so she needs her tools; special herbs from the nearby forest. Her quest to save her brother leads her to a powerful warlock, and a man bent on killing all witches and warlocks, including Vivian.

Marcus hides both darkness and light. His introduction to the tight circle of Kat, Tristan, Vivian and Sabine leads to both disaster and possible triumph, as he first prevents Vivian from achieving her mission, and then consents to help the group in return for supplies for his own hunt.

But it all goes horribly wrong. As Vivian and Tristan are temporarily overtaken by evil forces, they let the dark half of Kat’s personality, her alternate ego construct Lina, take over Kat, endangering them all. In Tristan’s re-living of Damien’s memories, they discover that Damien has been under a curse for centuries. He wasn’t responsible for all the evil that he did, just as Kat isn’t responsible for the irresponsible acts that Lina commits.

The results of those actions mean that all the players shift position. Kat loses her place as the Redeemer. The ruling council believes that Marcus is better suited to meet the threat of the High Priest. Finally they discover that the warlock Vivian and Marcus first encountered IS the High Priest, still bent on their destruction and conquering the world.

At some point, every single person changes sides on everyone else. At then end of the story, the reader is left with a lot of destruction and only a glimmer of hope that this motley crew will get their acts together, and just plain get together, in time to battle the evil they face.

It’s absorbing, and harrowing, to watch this story unfold.

Escape Rating B: The Betrayal is definitely a middle book. You can feel the story turning darker and darker as every situation goes from bad to worse. To put it another way, “Things are always darkest just before they turn completely black.”

The Descendant was Kat’s story, as she discovers who and what she really is. The Betrayal is more Vivian’s story, both because some of the key betrayals are hers, and because hers is the romance that gets resolved. Also because one of the initial betrayals, all the way back, was Damien’s betrayal of her. She finally gets a somewhat fresh start.

We also get the explanation for why Damien turned to the dark side that I wanted in the first book. It makes more sense now. It doesn’t necessarily excuse everything, but it makes more sense.

It’s also still Kat’s story. Watching her deal with, basically, the nastier sides of her self is something that was left from the first book and needed resolution.

While it was good to see Vivian have some good stuff happen to her, the vehicle for that “good stuff” wasn’t as fleshed out of a character as I’d like for the romantic side of the book. We need to know more about his strengths as a leader and as a hero. He starts out pretty mercenary and single-minded, and I need more to be certain that he really is on the side of the angels now.

The Betrayal was a non-stop thrill ride of a second book. Now that the rollercoaster is plowing down the hill fast, I can’t wait to see how the story gets wrapped. I’d like to see everyone get their “just desserts,” good, evil and mixed-up! 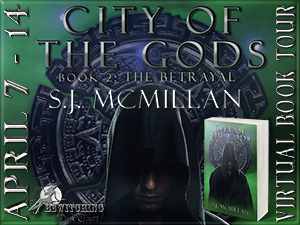 3 thoughts on “Review: City of the Gods: The Betrayal by S J McMillan + Giveaway”