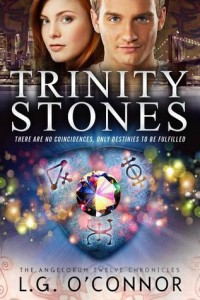 Anxiety-ridden New York investment banker, Cara Collins, has little to smile about on her twenty-seventh birthday between a hostile work environment and her impossible romantic situation with her longtime friend and first love, Dr. Kai Solomon. But before the day ends, she learns she has inherited $50 million—a windfall that must remain secret or risk the lives of those close to her.

As Cara unravels the truth surrounding her inheritance, she makes a startling discovery: angels walk among the living, and they’re getting ready to engage in a battle that will determine the future of the human race. In the midst of these revelations, she meets mysterious and sophisticated Simon Young, who offers her the promise of romance for the first time since Kai—but when Kai and his daughter are kidnapped by dark forces, Cara must choose: accept her place in a 2,000-year-old prophecy foretold in the Trinity Stones as the First of the Twelve who will lead the final battle between good and evil . . . or risk losing everything she holds dear.

Trinity Stones is the first book in what could be a twelve book series. It has a LOT of weight to carry to set up this slightly alternate version of our world where angels walk among us, waiting for the proverbial Last Battle between angels and demons.

Of course, they aren’t just waiting around, sitting on their feathered wings while humanity marches on oblivious. Although most of humanity is oblivious.

Mixed in with the prophecy of that last battle are signs and portents. The story of Trinity Stones is what happens when the first of those portents finds herself part of something that she was never prepared for.

Cara Collins is an investment banker who hates her boss and is in love with a man she can never have. Life sucks, right up until the point where she inherits $50 million and a whole lot of otherworldly trouble.

$50 mil certainly solves the “hate the boss” problem, but doesn’t do a thing for the loving someone she can’t have bit. Although it certainly provides one hell of a distraction–including visits from demons who really do reside in hell.

It’s not just that Cara finds out that her belief in a supreme deity has to expand to encompass more classes of angels than she thought imaginable, but also that she is going to be a front-line fighter in the war between heaven and hell–if she can manage to get out of her own way.

Her new life leads to danger, but also to fantastic new friends and a purpose bigger than she ever dreamed of. She even finds someone she can love, a man who makes her forget all about the one that got away.

Until she finds out that Simon Young is even more forbidden to her than her first love. Simon is assigne to be her Guardian as she fights the demons, and they aren’t permitted to let love get in the way of definding mankind against evil.

Escape Rating B: There were a lot of things to like about this story, and a few that drove me a bit crazy. YMMV.

There are, and there need to be, a lot of explanations for how this world is set up. Cara is supposed to be the first of the “Final Twelve” that portend the upcoming battle between good and evil. Which means there has to be tons of setup for the angels who help in the fight, and the people who are “assigned” to Cara as backup.

The portrayals of the growing friendship between Cara and the people assigned to help her, particularly Cara’s platonic friendship with Michael, are beautifully done. It is terrific to see a friendship between a straight man and woman that is clearly never going to tease at a possible romance. You don’t see that often, and it’s refreshing. Also Michael is just plain a great guy.

But there is a lot of necessary worldbuilding, to explain the angels, the soul-seekers like Cara, and the support network that they need. Occasionally there is quite a bit of info-dumping, and I still didn’t get the relationship between Cara’s “trinity” and the cornerstone, which is a person she needs to save from evil.

The angels are almost a military organization. That Cara wasn’t allowed to be involved with her guardian felt a lot like the military anti-frat regs. They can be involved with anyone but each other, so of course they fall for each other. And there was a bit of fated-mate in the relationship that pushed things along faster than would have happened otherwise.

Trinity Stones is a fascinating start to a series. I’ll be very curious to see what directions it goes in. On the one hand, I liked the fact that any belief system could lead to heaven, as long as the person lived a good, moral life. On that other hand, the story does presuppose acceptance of a lot of other traditional Judeo-Christian concepts, and I want the story to always be of primary importance. So far, so good. 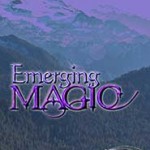 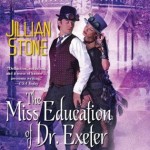