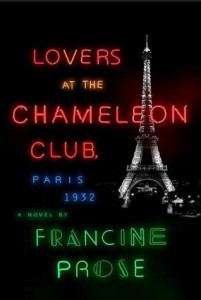 A richly imagined and stunningly inventive literary masterpiece of love, art, and betrayal, exploring the genesis of evil, the unforeseen consequences of love, and the ultimate unreliability of storytelling itself.

Paris in the 1920s shimmers with excitement, dissipation, and freedom. It is a place of intoxicating ambition, passion, art, and discontent, where louche jazz venues like the Chameleon Club draw expats, artists, libertines, and parvenus looking to indulge their true selves. It is at the Chameleon where the striking Lou Villars, an extraordinary athlete and scandalous cross-dressing lesbian, finds refuge among the club’s loyal denizens, including the rising Hungarian photographer Gabor Tsenyi, the socialite and art patron Baroness Lily de Rossignol; and the caustic American writer Lionel Maine.

As the years pass, their fortunes—and the world itself—evolve. Lou falls desperately in love and finds success as a race car driver. Gabor builds his reputation with startlingly vivid and imaginative photographs, including a haunting portrait of Lou and her lover, which will resonate through all their lives. As the exuberant twenties give way to darker times, Lou experiences another metamorphosis—sparked by tumultuous events—that will warp her earnest desire for love and approval into something far more.

Lovers at the Chameleon Club, Paris 1932 is a portrait, not merely of the two individuals pictured in the photograph, but also of the City of Lights in the Jazz Age, the 1920s and 1930s. Hemingway’s Paris. Picasso’s Paris. The Paris of the famous “Lost Generation”.

The portrait is drawn through the eyes of four disparate individuals who sometimes connect, and sometimes push against each other, until the Fall of Paris to the Germans and the subsequent division between collaboration and resistance push them all toward a final climax.

It’s also a story about the mutability of memory, and the way that eyewitnesses to the same event often remember totally different factors, some because they can’t get out of their own perspective as the center of the universe, some to protect the innocent, and some to protect the guilty. Particularly when they are the guilty parties themselves.

Time, in this case, both heals all wounds and wounds all heels.

The story revolves around the fictionalized character of Lou (Louisianne) Villars, purported to be the villain who revealed the location of the terminus of the Maginot Line to the Germans. But that’s not where Lou’s story begins. She begins as a young French girl who would quite probably rather have been a boy. She wants to dress as a man, and also to act as a man, including her preference for female lovers. She wants to participate in sports at the men’s level. Today her behavior and preferences wouldn’t raise an eyebrow, but in France in the 1920s and 30s it was illegal for a woman to dress in men’s clothing.

Lou’s tragedy is that she never seems to grasp whatever she is reaching for, whether that is success in sports, or happiness in love. She gets close, but never quite grabs the brass ring. And her lovers all turn out to be bad choices that lead her to destruction, both her own and other people’s. To the point where the conceit of this fictional biography is that Lou’s history was erased because she became a symbol of the evils of Nazi collaboration in France.

The photographic portrait for which the book is named is by the photographer Gabor Tsenyi, and its subjects are Lou and her first lover, Arletta, at their famous table at the Chameleon Club. In the photo, Tsenyi captured the end of their relationship, but also immortalized Lou dressed in a man’s tuxedo.

That photograph, along with others taken in the same period, makes Tsenyi’s career. His perspectives on Paris in the 20s and 30s, as written in letters to his parents back in Hungary, present an entirely different point of view on the scene.

As do the quasi-journalistic ramblings of his best friend, the American author Lionel Maine.

And last but not least, the perspective of Baroness Lily de Rossignol, who begins the story as Tsenyi’s patron, employs Lou in one of her several attempts at conquering the world of sport, and finally, as a member of the resistance helping to spirit people away from Lou and the Gestapo.

These differing viewpoints; the sarcastic writer, the artistic photographer, the socialite afraid of boredom and the sportswoman seduced by speed, the wrong women and Hitler, weave a tapestry of light, music and the beauty of Paris.

But is any of it what they really remember?

Escape Rating A-: Lovers at the Chameleon Club is a story that starts out slowly, but spins faster and faster as it races towards its conclusion. As each person adds their perspective, the portrait becomes deeper and richer; the more characters in the stew, the more of Paris is revealed.

Lou is not a likable character, it’s not just that nothing goes right for her, but that she seems to make the worst choices for reasons that are not clear. But even as she falls, and keeps falling, fascinating things happen around her and/or because of her. Her life is a train wreck, and once you’ve noticed, you can’t look away.

The Baroness is not likable either, but where Lou would be unhappy that she wasn’t liked, the Baroness thought much too much of herself to care what other people thought, as long as they danced to her tune.

The most sympathetic character in the story is Gabor Tsenyi. His is the eye that sees the beauty of Paris, and captures it with his lens. Because his part of the story is revealed through his heartfelt letters to his parents, we view events as they are happening, or in their immediate aftermath. While he admits to exaggerating, he isn’t trying to rewrite history to whitewash his past, because it doesn’t need whitewashing.

In the end, I found myself doing a wikipedia search for Lou Villars. Although Lovers at the Chameleon Club is fiction, and I knew it was fiction, it felt like a real history.

2 thoughts on “Review: Lovers at the Chameleon Club, Paris 1932 by Francine Prose”