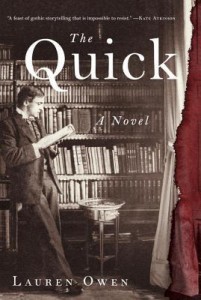 1892: James Norbury, a shy would-be poet newly down from Oxford, finds lodging with a charming young aristocrat. Through this new friendship, he is introduced to the drawing-rooms of high society and finds love in an unexpected quarter. Then, suddenly, he vanishes without a trace. Alarmed, his sister, Charlotte, sets out from their crumbling country estate determined to find him. In the sinister, labyrinthine London that greets her, she uncovers a hidden, supernatural city populated by unforgettable characters: a female rope walker turned vigilante, a street urchin with a deadly secret, and the chilling “Doctor Knife.” But the answer to her brother’s disappearance ultimately lies within the doors of the exclusive, secretive Aegolius Club, whose predatory members include the most ambitious, and most bloodthirsty, men in England.

As implied by the title, The Quick is a story about those of us who are alive, as opposed to, or in opposition with, or being preyed upon by, the dead. Or in this particular case, the undead.

It’s amazing when you look back, how long it takes any of the characters to say the word “vampire” in the story. In keeping with the Victorian lack of willingness to call anything what it really is, although everyone knows that they are, or want to be, or are studying, or are being chased by vampires, all the characters are supremely reluctant to say the word.

The story always felt like it fit within our perceptions of the Victorian period. There’s a slow buildup, from the story of a young man who decides to live in London after he graduates, to his developing relationship with his roommate and best friend, to the sudden horrific break in his pattern, when he gets accidentally turned into a vampire.

Which leads us to the Aegolius Club. London is so famous for its secretive gentlemen’s clubs, that the concept that one club restricts its membership to vampires is not that far-fetched. Very eerie, but not too far out there. The commentary that the dreary London weather is tailor-made for creatures who shun sunlight is wryly on target.

Into this mix we have an intrepid explorer. James Norbury is the accidental vampire, and his creation, his “exchange” of life from quick to undead, undoes many of the Aegolius Club’s sacred traditions. They try to correct their mistake by either bringing him into their fold, or killing him. He escapes and begins to roam London, uncertain of who he is or what he can do.

His sister comes to London to find her missing brother. And it’s her story that we follow. Charlotte discovers not one, but three secret societies, all at cross-purposes to one another.

The Aegolius Club wants to use her as bait to capture her brother. The Alia are not quite the criminal underworld of vampires, although there are elements of that, but mostly they are the organized group of non-upper-crust vampires, banding together to fend off their enemies, the elite of the Aegolius, and to pool resources and run businesses.

(If you’re going to live forever, you need something to live on, not to mention, live in.)

Charlotte finds herself an accidental member of the Rag and Bone society. They gather knowledge of vampires, and fight them. They can help her find her brother, but there’s no saving him.

A lot of death and destruction is caused on all sides, because Charlotte cannot be convinced of that fact.

Escape Rating B: This book starts out slow, and then builds to a climax that grabs you with its consequences, sort of like the hand reaching out of the grave at the end of Carrie.

There’s a level of understatement in the way that the plot unfolds; no one believes in vampires and the Aegolius Club wants to keep it that way. Everything is muffled in “that’s not what we do” or “that’s not the done thing”. Although it seems totally appropriate that the members of the club are very stuck on tradition and do not like change; most of them are fixed in the era of their life (and death) and they can’t adapt. They are hiding in the club, not hiding from anything in particular, but hiding from the future. They lose their spark after their undeath, because they have nothing to work towards–except controlling the members of the club.

Tradition also shrouds investigation into the limits of their powers. Part of what sets events in motion is one new vampire who wants to study them scientifically, so he compels a scientist to conduct experiments. The legends that arise among the vampire population about “Doctor Knife” are all the more chilling because they are true.

The story rises or falls based on one’s ability to empathize with Charlotte. Even though it is her brother’s change that sets her in motion, the adventure, and the danger, are really hers. What we see is her determination to discover what happened, and her complete unwillingness to accept that there is no cure, no matter how many people sacrifice themselves or how much even James himself demonstrate that there is nothing she can do to save him. She intrepidly follows a course that is nearly guaranteed to lead to disaster, and certainly will not help the person she intends to help.

At the end, the reader is left wondering whether the story is completely over. In a fantastically chilling way.

Lauren is giving away a print copy of The Quick to one lucky (and maybe quick) U.S. winner.

7 thoughts on “Review: The Quick by Lauren Owen + Giveaway”