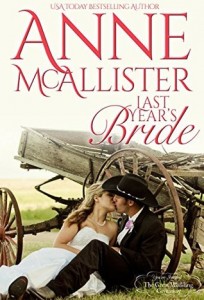 It’s for the ranch. It’s your duty. A man does his duty, always. His father Sam’s words were carved into Cole McCullough’s brain. His responsibilities lay with Rafter M Arrow, which had been in their family for over a hundred years. Even though they were fighting a losing battle to keep the place going.

The ranch always came first, over personal comfort, sometimes reason and definitely women. Sam had seen both his wives walk away, dismissing them as hot-house city girls who couldn’t survive the wilds of rural Montana. So how had Cole ended up making a spur-of-the-moment marriage last year in Reno to TV director Nell, who was as city as they came? Nell was prepared to give it all up to be with Cole. But he knew how it would end: as it had always ended before. It was time to stop living a pipe dream and sue for divorce.

But then Nell came back to Marietta with The Compatibility Game, a reality program, in which couples discovered what they were willing to do for love by living and working at Rafter M, and Cole found himself taking part too…

Last Year’s Bride is a story that almost makes reality TV palatable for me. The story is fun, the romance is sweet, and the main characters are all likeable, which is more than I can say for reality TV usually.

We have a mix of themes in Last Year’s Bride, and the blend makes for a short and lovely read.

Part of the fun is that this is a story where the happily ever after should have already happened! But it didn’t. We start the story with Nell and Cole already 10 months married, but living apart. Her career is in Los Angeles, and his life is his family’s ranch in Marietta Montana.

There isn’t much scope for directing and producing hit TV shows in Marietta. Which is where the problems between Cole and Nell begin.

They met while Nell was filming the rodeo, and had an absolutely whirlwind romance, with just enough breaks in between for them to figure out that they really loved each other, and that their romance wasn’t just a passing fancy.

After their spur-of-the-moment Reno wedding, they should have figured out their future. But they didn’t. Instead, Cole encouraged Nell to go back to LA to finish her degree, and he returned to Marietta to stew in his own juices.

Not quite. But when Cole returned to Marietta, he started telling himself all the reasons why Nell couldn’t and shouldn’t come to Marietta and make a life with him at the ranch. That she would eventually leave him, just the way his stepmother left his dad.

Notice I’m not saying that Cole ever asked Nell what she thought. He decided for her, and sent divorce papers. She not only didn’t sign them, but she brought the reality TV show that she was producing to Marietta to find out what went wrong. Only to discover that there was nothing wrong except for Cole’s fear of repeating his dad’s mistakes.

They love each other, but it takes all of Nell’s storytelling persuasion to get Cole to admit that the future is what they make together, and never something that he can decide for her.

With a little bit of help from the Radio City Rockettes.

Escape Rating B: While I adore the second chance at love aspects of this story, I think I may be burned out on the whole “he THINKS he knows best what’s good for her” self-sacrificing angle. It always adds up to a huge misunderstandammit that could have been avoided. I also can’t help wondering about how wonderful can the guy be if he even remotely thinks that he needs to do her thinking for her, or that she doesn’t know her own mind. In historicals, there’s a possibility that the attitude fits the times, but in a contemporary it gives my willing suspension of disbelief serious twinges.

Nell’s boss also needs a hit in the short and curlies for pulling the exact same attitude. While it grates just as much, he’s her boss and not her husband, so she’s not planning on a happily ever after with the dude.

However, the background story of Nell dragging the entire cast and crew of a reality TV show to Montana just so she can get Cole to either admit they have a future or get closure was terrific. Not just because Cole got a chance to show off in front of the camera, but because we also see Nell’s extreme competence and watch Cole’s family interact with each other and the reality show participants.

The occupation of the ranch by Hollywood turns out to be a revelation for everyone involved, especially some of the participants.

I liked Nell. She came to Montana to find out what went wrong (or not) instead of making assumptions. I also liked the way she stood up to Cole’s attitude, and finally walked away, making him decide what he wanted for himself, and not what anyone else expected.

But my favorite character is Cole’s grandmother Emily. She managed to pretty much call bullshit on both Cole and his father, and all without saying a word. She was absolutely awesome.