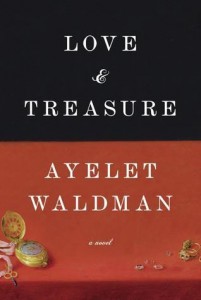 In 1945 on the outskirts of Salzburg, victorious American soldiers capture a train filled with unspeakable riches: piles of fine gold watches; mountains of fur coats; crates filled with wedding rings, silver picture frames, family heirlooms, and Shabbat candlesticks passed down through generations. Jack Wiseman, a tough, smart New York Jew, is the lieutenant charged with guarding this treasure—a responsibility that grows more complicated when he meets Ilona, a fierce, beautiful Hungarian who has lost everything in the ravages of the Holocaust. Seventy years later, amid the shadowy world of art dealers who profit off the sins of previous generations, Jack gives a necklace to his granddaughter, Natalie Stein, and charges her with searching for an unknown woman—a woman whose portrait and fate come to haunt Natalie, a woman whose secret may help Natalie to understand the guilt her grandfather will take to his grave and to find a way out of the mess she has made of her own life.

I loved the first two sections of Love & Treasure, which pretty much embody the two words in the title. Part 1 is Treasure, Part 2 is Love.

However, there was a part 3, and it felt like it broke the narrative flow of the story. Not that it wasn’t good on it’s own, but that the entire book could have ended with part 2, and I’d have been content.

Not making sense? Let’s try it this way.

Part 1 of Love & Treasure is about the finding of the treasure. It’s a story bound up with World War II, the confiscated property of Jews who were deported, and one American Jewish soldier stationed in Salzburg at the end of the war, watching the looting of the artifacts of an entire community.

The Hungarian Gold Train really existed. Hungary was captured by the Nazis in 1944. The Jewish population was shipped off to concentration camps by the colluding Hungarian government. When it looked like Hungary was going to be liberated by the Allied forces in 1945, all that confiscated loot was put on a train bound for Germany.

The train was captured by U.S. troops, and that’s where the story begins. Captain Jack Wiseman is put in charge of inventorying the collection, and he finds himself forced to watch as his superior officers systematically loot the property in order to furnish their occupation headquarters all over Europe.

In history, none of the property was ever returned to its owners or their descendants. In the story, Jack takes one small piece as a memento; a peacock necklace. On his deathbed, he asks his granddaughter to find someone to whom that necklace rightfully belongs (or at least more rightfully than himself). He wants to give her a quest, and to assuage some of his own guilt. But it’s mostly about taking care of her, one last time.

The second part of the story is Natalie’s quest to find a person who is connected with the necklace. Her journey puts her in the path of the slightly shady art dealer, Amitai Sasho. Amitai usually finds people who are heirs to concentration camp victims, and locates treasure owned by their dead ancestor. Then he brokers a deal where the art gets sold, and everyone involved gets a piece of the pie, especially his firm. There’s nothing illegal about the operation, but it is just a bit grey.

That peacock necklace features prominently in a painting by an relatively unknown Hungarian artist. Amitai is obsessed with finding, not the necklace, but the lost painting. Natalie is driven to fulfill her promise to her grandfather.

Tracking down the provenance of the necklace brings Amitai and Natalie close enough to discover that what they have really both been searching for is each other. Finding the painting is just a bonus. Admittedly a very big bonus.

Escape Rating B+: There turn out to be three stories here; the original provenance of the peacock necklace, Jack’s service in Salzburg and conditions among the general population and particularly the DPs (Displaced Persons) and finally his granddaughter Natalie’s search for someone connected with that original provenance.

While it was interesting seeing the story of the necklace before it ended up on the train, and finding out how the original owners used it as a present back and forth, that story was told at the end, and it lost dramatic tension. It felt like it should have been at the beginning, but it wasn’t nearly as dynamic a story as Jack’s or Natalie’s. YMMV.

Jack’s story has the most meat to it. He’s conflicted at watching the assets of the train get bureaucratically looted, and he feels torn between his identity as a Jew and his service as a soldier. He knows what’s happening isn’t right, but he’s powerless to stop it. The problems that he can at least contribute to solving are the continued deprivations of and depredations on the Jewish DPs stuck in Salzburg. By doing the right thing, he becomes involved with a Hungarian DP, Ilona. He’s never sure what their relationship is, and whether she is using him or really cares. Through his involvement with her, we also see the political machinations of Zionists who will use any means necessary to force the British to open up Palestine. (Historically, we know where this ended up).

Natalie’s story provides closure, but it occurs in the middle. Jack is the past, and Natalie is the future. Her willingness to search everywhere and do anything to settle his ghosts gets the story involved with Amitai’s mercenary repatriation efforts. And with Amitai, who is a slightly shady character that finds a way out into the light.

Ayelet is giving away a print copy of Love & Treasure to one lucky U.S. winner.
a Rafflecopter giveaway

11 thoughts on “Review: Love and Treasure by Ayelet Waldman + Giveaway”