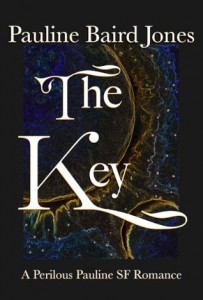 When Sara Donovan joins Project Enterprise she finds out that what doesn’t kill her makes her stronger. An Air Force pilot – the best of the best to be assigned to this mission – Sara isn’t afraid to travel far beyond the Milky Way on an assignment that takes her into a galaxy torn apart by a long and bitter warfare between the Dusan and the Gadi. After she’s shot down and manages to land safely on an inhospitable planet, Sara encounters Kiernan Fyn – a seriously hot alien with a few secrets of his own – he’s a member of a resistance group called the Ojemba, lead by the mysterious and ruthless Kalian. Together they must avoid capture, but can they avoid their growing attraction to each other? A mysterious, hidden city on the planet brings Sara closer to the answers she seeks – about her baffling abilities and her mother’s past. She has no idea she’s being pulled into the same danger her mother fled – the key to a secret left behind by a lost civilization, the Garradians. The Dusan and the Gadi want the key. So do the Ojemba. They think Sara has it. They are willing to do anything to get it. Sara will have to do anything to stop them.

The difficult thing about reviewing for the Sci-Fi Romance Quarterly isn’t the book I’m assigned–it’s the commitment to review one “classic” work of SFR. The definition of “classic” is thankfully loose–the book just has to be older than the current quarter. 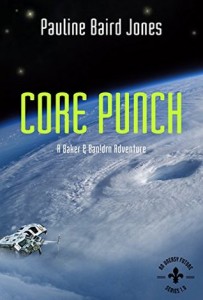 Since I chose Core Punch by Pauline Baird Jones for my current book (review to come), my decision was made for me, sorta/kinda. Core Punch is a spinoff of not one but two of Jones’ series; Project Enterprise and The Big Uneasy. Much as I love the sound of The Big Uneasy (yes, it’s New Orleans) it doesn’t quite seem like SFR.

The Key is very much SFR. And here we are.

The crew of Project Enterprise, which in this story is a group of ships, and not just one intrepid explorer, has definitely gone where no Terran has gone before. Unfortunately, they’ve ended up in a galaxy under extreme contention between two empires, the Gadi and the Dusan. The non-aligned Terrans, and their flagship Doolittle, choose sides pretty quickly when the Dusan start a shooting war without provocation.

If the Doolittle isn’t named after Lieutenant Colonel James “Jimmy” Doolittle, U.S. Army Air Forces, the leader of the famous “Doolittle Raid” over Tokyo during World War II, I’ll eat my rocketship. Or yours, just find me one.

The Key to the story, and to the intergalactic hi-jinks that ensue, is Captain Sara Donovan, a hot shot Air Force pilot who joined to explore new worlds meet new people, and kill them. Mostly Sara just wants to fly fast and far. The mission of Project Enterprise to another galaxy is about as far as it gets.

Except that she may have come right back to where she belongs. Sara bears an incredibly strong resemblance to a legendary woman of the Garradians, and all the planetary powers that be are much too certain that Sara is the key to a vast treasure-trove, because the legendary Miri must have given that key to her.

And Sara, who has always been firmly convinced that she is not beautiful, is utterly certain that all this alien interest in her is a result of who she resembles, not who she is.

So the chase is on. Sara just wants to fly. The rulers of both the Gadi and the Dusan want her to be their queen. Or their chief prostitute. Or their slave. Opinions vary, but both Sara and her commanding officers are sure that whatever fate the locals have in store for Sara, it isn’t for her good. Or anything she would ever want.

What she thinks she wants is Kiernan Fyn, the alien she found on a deserted planet. After the Dusan crashed her ship. And it turns out, his ship. They might be made for each other, if he can manage to spill all the secrets that chain him to his old life.

And if Sara is willing to embrace her destiny.

Escape Rating A-: The Key is a huge, sprawling space opera of a book, so be prepared to wallow in the pleasure of exploring this universe for a good long time. Emphasis on both “good” and “long”. 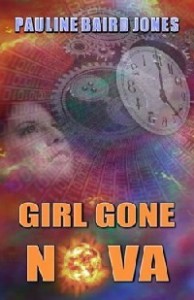 I’m annoyed at the “long” because I want to dive into the rest of the series (Girl Gone Nova is next) right this minute–and I’m booked up until late October at the earliest. DAMN!

Sara is a terrific heroine, not just because she seriously kicks ass, but because all of her actions, even the ones she isn’t conscious of, have incredibly good reasons behind them. I also loved that while she does fall “gooey in love” with Fyn, it doesn’t remove her brains, her reason or her agency. This is Sara’s story, and she’s not in it looking for Prince Charming. She’s in it to take care of herself and do the best job she can for her country.

Finding Prince Charming, or even Hot Alien sometimes Charming, is a bonus.

Speaking of Sara’s country, she really is a U.S. Air Force Captain. This series is set in a slightly alternate version of our world (well, back home it is) and does not seem to be very far removed (if at all) from our current timeframe. It’s as if the U.S. Government has a “black” project to solve Faster-Than-Light (FTL) travel right now, and it worked. Sara and her team’s pop culture references are very contemporary, which was fun and provided lots of perspective, but seems slightly off, unless that “black” project exists after all.

It feels like she should be just a bit further into our future than she is, or that our past should be different than it was.

While I like Fyn, a lot, he does fill the role of alpha male with big secret more than he stands out as an individual. He fills that role very well, but this is Sara’s show. It felt like I’ve met his type on Star Trek a million times–not that that is a bad thing.

What shone for me was Sara’s relationship with her commanders and crewmates. While she has deliberately suppressed much of what makes her “extra-special” in order to blend in, the depth of her commitment to her ship and to the crew that serves her feels right. She calls herself a fighter-puke and she presents herself as such. (Think Starbuck on BSG but with a bit more respect for the rules). She sees the crew and the Air Force as family, and it’s mutual.

If you like your space opera with romance, The Key is a fantastic way to get your fix. The way that Sara and Fyn meet is reminiscent of Cordelia and Aral in Shards of Honor. The role that Sara both fulfills and subverts reads a bit like Gillaine Davre in Linnea Sinclair’s Accidental Goddess. Those are terrific “fairy godmothers” for any SFR.

4 thoughts on “Review: The Key by Pauline Baird Jones”