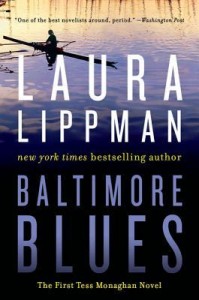 Until her paper, the Baltimore Star, crashed and burned, Tess Monaghan was a damn good reporter who knew her hometown intimately — from historic Fort McHenry to the crumbling projects of Cherry Hill. Now gainfully unemployed at twenty-nine, she’s willing to take any freelance job to pay the rent — including a bit of unorthodox snooping for her rowing buddy, Darryl “Rock” Paxton.

In a city where someone is murdered almost everyday, attorney Michael Abramowitz’s death should be just another statistic. But the slain lawyer’s notoriety — and his noontime trysts with Rock’s fiancee — make the case front page news…and points to Rock as the likely murderer. But trying to prove her friend’s innocence couls prove costly to Tess — and add her name to that infamous ever-growing list.

Even though the two books were written a decade apart, I found myself comparing Baltimore Blues, the first book in Laura Lippman’s Tess Monaghan series, to One for the Money, the introduction of Stephanie Plum.

In both books, we have a relatively young woman who is currently down her luck – her career has stalled and died, and she is left putting the rent money together through freelancing, odd jobs, and falling back on the refuge of her family. Both women are firmly in the middle to lower middle class. Neither expects or even dreams of rescue by billionaire.

Both families have some less than savory dealings in their immediate history. Vinnie’s Bail Bonds seems to operate at the edge of legality, and Tess’ uncle is a time-server in the Baltimore City Government because he wasn’t quite bad enough to indict.

And Stephanie works for Vinnie, while Tess works for her uncle. In both cases, the jobs are charity. No one really believes that Stephanie will become a bail bond agent, and Tess’ uncle is paying her out of his own pocket so that he has an excuse to give her money and someone to keep him company in his empty office a couple of hours a week.

Both women get thrown into private investigating through a back door. Stephanie really does become a bail bonds agent, no matter how crazy or accident prone. One of Tess’ friends is sure that her failed career as a newspaper reporter give her all the tools she will need to investigate whether his girlfriend is cheating on him or up to a different kind of no good.

Of course, Tess’ involvement makes things worse. She does find proof that Rock’s fiance is cheating on him – also that she is a shoplifter. But Tess discovers that she can’t do the really hard part of being a P.I. – she can’t bear to give her friend the bad news. So she tries to blackmail the girlfriend into a confession.

Tess has only made things worse. Because the girlfriend will do anything to get to Rock’s bank account, including lie. Let’s face it, she already cheats and steals, so lying is all that’s left. Instead of having an affair with her boss, what she tells the poor sap is that her boss threatened her job if she didn’t screw him.

If only any of this had actually been about sex, it would have been a LOT easier for Tess to sort out.

The boss is found dead, and Tess’ friend is the only suspect. His lawyer hires Tess to help her friend find a way out of the mess that Tess has gotten him into.

Instead, it takes a long time and the following of a lot of red herrings for Tess to zero in on who and what got the lawyer killed. And what connects the trail of bodies that turn up in his wake.

Escape Rating B+: While I compared Tess to Stephanie at the beginning of the review. I’ll say now that I like Tess better, at least in her first outing. While there isn’t as much of the zany madcap in Tess, her adventures turn out to be less hilarious and more grounded in a universe closer to reality.

Admittedly, a reality where your friends end up murdered and being murder suspects in the same case.

Tess is in a life that has been on hold since she was laid off in a newspaper consolidation. This is something that feels real, both in that the newspaper industry is shrinking at an astonishing rate, and that she can’t find something she loves anywhere near as much as she loved being a reporter. She can’t move on.

Her love life, so far, also has one of those familiar aspects to it as well. Tess can’t get past her relationship with Jonathan, one of the star reporters at the surviving newspaper. She hasn’t found anyone she wants more, so she lets him stop by for a booty call whenever he feels like it, in spite of his having a fiancée somewhere in the suburbs. After the death of her newspaper career, Tess just doesn’t think enough of herself to boot Jonathan out of her life. Until circumstances force a final decision.

Tess does solve the case. Not by being stupid and lucky, the way that Stephanie often is, but by being persistent and dogged and not letting go. Also by using every resource available to her in her own experience, her friends and colleagues, and when necessary, her family.