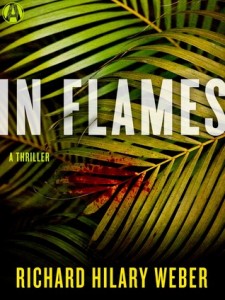 San Iñigo is a jewel of the Caribbean, a playground paradise for the foreign elite, a hell for unfortunate locals. For recent Princeton grad Dan Shedrick, San Iñigo promises the fulfillment of too many desires.

Dan hires on at a powerful American firm as a junior architect, but still finds time for tennis, booze, a reckless affair with the sexy wife of a resort owner—even a bit of reconnaissance for the U.S. cultural attaché. But soon he discovers that nothing on San Iñigo is without consequence. When a much-loved local radio personality is found on a beach with his head blown off, Dan’s lover becomes a suspect. And not long after his foray into espionage, he’s dragged away on a brutal journey into the heart of darkness.

Buffeted by aggression, depraved ritual, and personal betrayal, Dan discovers fierce truths about San Iñigo . . . and himself. In the island’s forbidding mountain jungle, his life goes up in flames—a deadly inferno that will forever change him, if he survives at all.

I finished this last night, and I’m still not quite sure what it is intended to be. It takes stabs (sometimes literally) at a lot of different genres and ideas, but never quite settles on one or the other (or the other).

At first we have a young man on a tropical island. While it sounds like paradise, it obviously is not. Dan Shedrick is a recently minted architect with a degree from Princeton, and no job prospects. It’s not him, it’s the Great Recession. Jobs for new graduates, along with everyone else, took a multi-year nosedive.

This may just be my own background.showing, but “Shedrick” reads way too much like “Shmendrik”, which is Yiddish for “stupid person”. The resonance was strong because Dan Shedrick comes off as a “shmendrik”. He is stupid, or at least clueless throughout much of the book. In The Joys of Yiddish by Leo Rosten, a shmendrik is defined as an apprentice shlemiel, meaning loser or fool. Dan is certainly both of those, too.

I would say I just digressed, but I’m not sure I did. Dan embodies both of those dubious qualities through the entire story. It was a concept that I could not get out of my head.

Dan gets a job, but not in the U.S. He becomes a contractor for the U.S. based Xy Corp., designing oil rigs and other architectural/engineering constructs, on the tropical island San Iñigo. The place is described as lawless and dangerous outside of the protected zones, and Dan sees the gun emplacements surrounding the airport as solid proof. The U.S. is propping up a corrupt government in order to get access to the offshore oil and other natural resources, and Xy Corp. is their chief contractor. Or chief extractor.

Of course there are rebels who want their island and their country back. I say “of course” because that is the common narrative for these type of stories, and it is also the narrative in the news about many such places.

Dan gets sucked in to the strange otherness of the ex-pat community on San Iñigo. He is seduced by the lifestyle of clinging to the protected zones, his own former countrymen, and living a life of relative luxury at the golf and tennis club while he drinks his nights away. He is also seduced by the young wife of the club owner, totally oblivious to the fact that Elaine seduces every man in the club for ends that are only vaguely realized or understood.

Even when Dan is recruited by the local U.S. CIA Station Chief to operate a listening post for the U.S. Government and its interests in San Inigo, Dan remains oblivious to the sheer number of people who are using and manipulating both him and the San Inigo officials.

Until Elaine literally throws him to the wolves and he finds himself kidnapped by the local rebels by mistake. He sinks into his own “heart of darkness” as he battles the jungle with his captors, and then battles against them and that same jungle in order to escape.

Once he is out, he discovers that he is not really free, and that he never has been. Just as he was used by everyone on all sides prior to his kidnapping, he emerges only to realize that everyone has plans to use him and his story for their own ends once he has escaped.

And there doesn’t seem to be anything he can do to stop them.

Escape Rating C-: For this reader, the problem was that the story started out with multiple possible plot lines, and ended up absolutely nowhere. Dan Shedrick was a shmendrik.

Because the story is told entirely from Dan’s point-of-view, we only know what he knows and only see what he sees. And Dan never does seem to know very much. Even at the end, he only thinks he’s figured out what is going on in tropical San Iñigo (and with Elaine). It doesn’t ever feel as if he either finds or discovers anything like the whole truth. Which means that we don’t either.

There are lots of secrets hinted at but none are ever revealed. Elaine might have been sleeping her way through the San Iñigo government. The U.S. might (is probably) propping up a corrupt dictatorship through proxies and military contractors. Dan is almost certainly being used by the U.S. propaganda machine, but he (and we) never get to the bottom of why.

This might be more tolerable if Dan were a more interesting or even sympathetic character.I never cared about him, so I didn’t care what happened to him. In Flames is not quite a mystery, but did not have the breakneck pace of a thriller. It did leave me with a lot of questions about San Iñigo, and especially about who was using who.

3 thoughts on “Review: In Flames by Richard Hilary Weber + Giveaway”