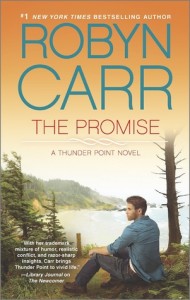 Scott Grant has a bustling family practice in the small Oregon community of Thunder Point. The town and its people have embraced the widowed doctor and father of two, his children are thriving, and Scott knows it’s time to move on from his loss. But as the town’s only doctor, the dating scene is awkward. That is, until a stunning physician’s assistant applies for a job at his clinic.

Peyton Lacoumette considers herself entirely out of the dating scene. She’s already been burned by a man with kids, and she’s come to Thunder Point determined not to repeat past mistakes. When Scott offers her a job, at a much lower salary than she’s used to, Peyton is surprisingly eager to accept…at least for now. She’s willing to stay for a three-month trial period while she explores other options.

Scott and Peyton know the arrangement is temporary—it isn’t enough time to build a real relationship, never mind anything with lasting commitment. But love can blossom faster than you think when the timing is right, and this short visit just might hold the promise of forever.

The Promise in the title of this book is a promise that Peyton Lacoumette makes to Thunder Point’s only doctor, Scott Grant, that she will stay in Thunder Point as his physician’s assistant for three months.

Scott’s growing practice needs Peyton’s skills as a PA very badly, but the small town general practice can’t afford to pay the kind of salary that a top-notch PA with a stellar reputation like Peyton can command in either Portland or Seattle. Or anywhere else that Peyton might want to go.

But Peyton’s large and boisterous family owns a farm not-too-far from Thunder Point, and Peyton has come back to rural Oregon to recover from a relationship that strayed from the professional to the personal, and went horribly wrong.

When your lover is also your boss, when you break up with the former, it’s impossible to stay around the latter. Particularly after you discover that he’s been playing around with one of his nurses while he’s left you to attempt to deal with his spoiled, over-indulged, and even criminal teen-aged children, as well as managing his practice.

Peyton is broken-hearted half as much as she feels deceived, not just by her ex but by her own willingness to ignore all her reservations and sacrifice some of her self-esteem to keep trying to save a relationship that was never what she thought it was.

Peyton let herself be taken advantage of for three years, and she’s mad at herself. Also seriously questioning her own judgment about men, and possibly even about jobs.

Scott’s small-town practice seems like a perfect place to do good work, recover herself a bit and then see where she wants to go and what she wants to do.

What she doesn’t want to do is get involved with her new boss, or find herself taking care of his two young children. So on her first day on the job, Peyton is stuck babysitting little Will and Jenny while Scott rushes to the scene of a church-bus accident.

She expects to feel put-upon, and stuck in the same position she was with her ex, but the situations are nothing alike. Not just because Scott Grant is a widower and doesn’t even have a divorced ex to take care of the children, but because Scott has paid attention to his kids and given them both love and boundaries. Where Ted’s kids were deliberately terrifying, Scott’s kids are well-behaved and openly loving.

Peyton finds herself settling in to the warmth, charm and open-hearted friendliness of Thunder Point, while Scott can’t help but fall head over heels for his intelligent, beautiful and caring assistant. It doesn’t help his slide that his kids adore Peyton to pieces.

But Peyton faces doubts on every side. Or nearly every side. Scott’s kids really are adorable, well-behaved, and they definitely love her. While it may be easier for them to be more adorable at ages 4 and 5 then they will inevitably be as teenagers, Will and Jenny have a much better grounding, and a much better chance of turning out to be decent people, than Ted’s nightmare children.

It may help that Will and Jenny can’t hope for a reconciliation with their parents. With their mother dead, the best that they can hope for is a new mommy to make their dad and them happy.

Peyton also doubts whether the small-town life and small-town pace (along with the small-town salary) is really for her. Although she grew up on a family farm, she has loved her life in the big city. At the same time, Scott offers her the chance to be a real partner in his practice, doing good medicine, and she can’t help but be tempted.

And sweet and loving Scott, along with the welcoming town of Thunder Point, steal her heart.

Escape Rating B+: Unlike some of the earlier entries in the Thunder Point series, the romance in this one is front and center. Peyton and Scott both try to resist their attraction, but as the days turn into weeks, they slowly, inevitably, succumb.

In this love story, the reasons that they might resist are all issues that they can overcome, if they just open their hearts and minds.

Mostly that opening is on Peyton’s part. Scott’s only reservation is that Peyton keeps saying that her stay in Thunder Point is temporary. It’s up to him to convince her that life in this marvelous little town will satisfy her personal and professional goals.

Peyton is rightly gun-shy. When her ex barges onto the scene to demand that she come back, she completely rejects him. He’s a selfish bastard, and she finally sees that in all its glory. But she can’t help but be drawn back in when one of his daughters reaches out to her in an hour of desperate need.

Scott finds himself afraid that Peyton will return to Ted’s cushy practice and high-living lifestyle. He compares his small-town practice and low-key life and feels like he comes up short. He pushes Peyton away just at the point where she’s sure of her priorities.

The push-pull of their relationship feels real. They’ve both been independent for quite a while. They are both afraid to need and to trust. It takes a return to their roots for both of them to figure out that their future is together.