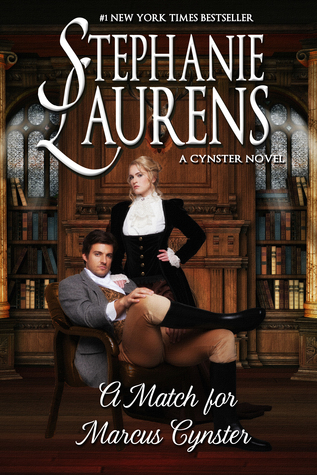 Restless and impatient, Marcus Cynster waits for Fate to come calling. He knows his destiny lies in the lands surrounding his family home, but what will his future be? Equally importantly, with whom will he share it?

Of one fact he feels certain: his fated bride will not be Niniver Carrick. His elusive neighbor attracts him mightily, yet he feels compelled to protect her—even from himself. Fickle Fate, he’s sure, would never be so kind as to decree that Niniver should be his. The best he can do for them both is to avoid her.

Niniver has vowed to return her clan to prosperity. The epitome of fragile femininity, her delicate and ethereal exterior cloaks a stubborn will and an unflinching devotion to the people in her care. She accepts that in order to achieve her goal, she cannot risk marrying and losing her grip on the clan’s reins to an inevitably controlling husband. Unfortunately, many local men see her as their opportunity.

Soon, she’s forced to seek help to get rid of her unwelcome suitors. Powerful and dangerous, Marcus Cynster is perfect for the task. Suppressing her wariness over tangling with a gentleman who so excites her passions, she appeals to him for assistance with her peculiar problem.

Although at first he resists, Marcus discovers that, contrary to his expectations, his fated role is to stand by Niniver’s side and, ultimately, to claim her hand. Yet in order to convince her to be his bride, they must plunge headlong into a journey full of challenges, unforeseen dangers, passion, and yearning, until Niniver grasps the essential truth—that she is indeed a match for Marcus Cynster.

I had read most of the early Cynster books a while back – it looks like I stopped at 15, Temptation and Surrender. So I knew enough of the early background without remembering each and every detail. 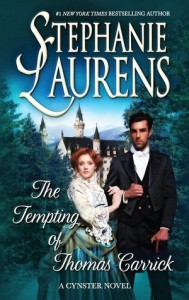 On the other hand, I think I’m glad that I haven’t read the most recent previous book The Tempting of Thomas Carrick. Based on the descriptions of past events in Marcus’ book, it’s obvious that very recently a lot of bad things happened to a lot of good people. In Match, we find out just enough, without having to deal with the horrible events as they occurred.

The resolution of those events forms the backdrop for this book. And we learn quite enough to make that backdrop make sense.

Niniver Carrick has become the Lady of Clan Carrick after what can best be described as a series of extremely unfortunate events. While it appeared that her oldest brother Nigel murdered their father, the early events in Match show that next-brother Nolan was the real murderer, and that he murdered Nigel as well, leaving Niniver and her youngest brother Norris as the last members of the leading family of Clan Carrick.

Niniver has also discovered that her two older brothers’ machinations and gambling debts have left the clan in a gigantic financial mess. With time and care, it can be sorted out, but Niniver expects that someone else will have that sorting. While the Carrick family have been the traditional Lairds of Clan Carrick, her remaining brother doesn’t want the leadership, and Niniver assumes that she is ineligible.

The clan decrees otherwise, and votes Niniver in as Lady Carrick.

Leaving Niniver with a personal dilemma. She is not married. Now that she is Lady Carrick she believes that she will never find a man who would be willing to marry her but not attempt to wrest the leadership of the clan out from under her. It’s a realistic fear in her time and place.

The clan will not follow anyone but her. They trust her and no one else. If some putative husband attempts to usurp her power, it will fracture the clan, and she knows it. But the law is otherwise, her husband would expect to take over everything she owns and holds, not understanding that leadership of the clan is given, not inherited, and that that leadership is based on trust and not merely the right of inheritance.

Of course for any casual reader of the Cynster stories, or just by learning about Marcus Cynster from the pages of this book, it is easy to see that the men of the Cynster family have learned better. As a group, they have found, or been forced to realize at dear cost, that a marriage of equals is a much happier and more fulfilling marriage for both parties.

Marcus is perfectly suited to marry Niniver. He knows how to support her from beside or if necessary behind her, because he’s seen the men of his family support their wives the same way. Even better, he has loved Niniver from afar for years. He just has no idea if she feels the same, or if she feels much at all.

Until circumstances force her hand. The younger, unmarried men all seem to be contesting for Niniver’s hand, in spite of her continued refusals and rebuffs. She is caught between a rock and a hard place – many of their fathers are influential in the clan, and she can’t afford to alienate their support. But their sons are not just acting like buffoons, but their continued flouting of her authority is shaking the foundations of her leadership.

Niniver has to admit that she needs a man to run off these young louts in a manner which brooks no argument – with fists if necessary. She calls upon her neighbor, Marcus Cynster, for his assistance in this matter, and tries to ignore her own feelings. She has loved Marcus for years, but has no idea of his feelings for her. She assumes that he is like all the other men of his class, instead of looking at his family for examples. (Her immediate family was never the supportive type, she has no concept of the close-knit nature of his.)

Each of them believes that a few days of Marcus in residence at Carrick House will teach the young men a lesson. Neither of them reckons on an outsider who is stirring up trouble in the hopes of taking his own advantage.

And neither of them counts on the continued danger drawing them so close that they are able to step past all of the own reservations – and irrevocably towards each other.

Escape Rating B+: As I said at the beginning, I enjoyed the heck out of this book. It’s not just that Niniver and Marcus are very likeable, although they definitely are, but that their romance, that neither one of them is willing to admit is a romance, fits the characters and the situation so well.

As a heroine, Niniver is a treat. It is difficult in a historical romance for the heroine to have not merely personal but also professional agency in a way that does not feel anachronistic. Upper class women just didn’t aspire to careers, at least within the pages of historical romance. But Niniver is a leader, and in a way that feels like it is reasonably possible in her time and place. And she recognizes that the leadership is both a privilege and at times a burdensome responsibility.

She reasons, mostly correctly, that she can either be the Lady or be married, but not both. Eventually she, or rather the clan, might be in a financial position where a change in leadership would be survivable, but that time is not now.

I’ll confess to a bit of concern about her affair with Marcus. Not because she decides to have one, but that no one ever considers what will need to occur if she gets pregnant. Not that Marcus wouldn’t be thrilled to marry her under any circumstances, but for a woman who does a great deal of forward planning, this particular blindspot loomed a bit large.

Marcus is a good match for Niniver because he knows what he is getting into from the very beginning. She, or her position, don’t change his essential nature. He knows from the outset that Niniver needs a consort and not a Lord, and he understands and is willing to fulfill that role from the start. He protects her and supports her – it is her right and duty to conduct business for the clan. He usually manages to hit just the right note. And it’s not an act – he’s adopting the role he hopes to have from the beginning of their relationship.

Almost all of Laurens’ heroes and heroines have a difficult time either admitting they love each other or at least managing to say it to each other. This often results in a minor misunderstandammit late in the story, as is the case here.

However, the suspense element in this book nearly makes that misunderstanding fatal. Niniver is rightfully wary of any friends of her older brothers, because the fast crowd they got involved with directly contributed to the financial mismanagement of the clan. One of their crowd keeps hanging around, and it is obvious to the reader from the very beginning that Ramsey McDougal is up to no good. It was so obvious that he was behind all of Niniver’s current troubles that I kept wanting to shake Niniver and Marcus out of their complacency long before they finally figured out what MacDougall was up to.

So, although the villain was a bit bwahaha predictable, the hero and heroine were generally terrific. A Match for Marcus Cynster is a good book to read on a hot day, dreaming of the breeze over the Highlands. (Extra points for the creative use of THE love scene from Star Wars) 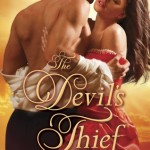 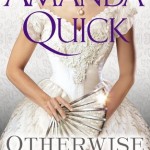 2 thoughts on “Review: A Match for Marcus Cynster by Stephanie Laurens”