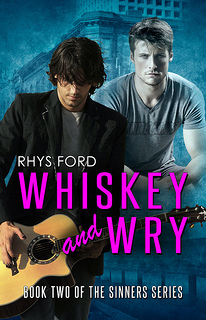 He was dead. And it was murder most foul. If erasing a man’s existence could even be called murder.

When Damien Mitchell wakes, he finds himself without a life or a name. The Montana asylum’s doctors tell him he’s delusional and his memories are all lies: he’s really Stephen Thompson, and he’d gone over the edge, obsessing about a rock star who died in a fiery crash. His chance to escape back to his own life comes when his prison burns, but a gunman is waiting for him, determined that neither Stephen Thompson nor Damien Mitchell will escape.

With the assassin on his tail, Damien flees to the City by the Bay, but keeping a low profile is the only way he’ll survive as he searches San Francisco for his best friend, Miki St. John. Falling back on what kept him fed before he made it big, Damien sings for his supper outside Finnegan’s, an Irish pub on the pier, and he soon falls in with the owner, Sionn Murphy. Damien doesn’t need a complication like Sionn, and to make matters worse, the gunman—who doesn’t mind going through Sionn or anyone else if that’s what it takes kill Damien—shows up to finish what he started.

When I first read the awesome Sinner’s Gin (reviewed here) it was so much Miki St. John’s story that I couldn’t figure out where a series might take off from until the very, very end. So much of Miki’s angst in that story is that his family-of-choice, his bandmates in Sinner’s Gin, are all unequivocally dead in the accident that wracked, and nearly wrecked his body.

You can’t get the band back together if most of the members are in the afterlife. This isn’t that kind of series.

But at the very end, we discover that Damien Mitchell, Miki’s brother-from-another-mother, isn’t really dead. People just want him to believe that he is someone other than Damien Mitchell, and have locked him in an asylum to make him believe it. And sometimes he nearly does.

Then the shit hits the fan, and some unknown villain torches the place and guns down Damien’s attendant/bodyguard. Damien seizes his chance with both hands and one stitched-together body and escapes.

His memory is swiss cheese, but there are a few things he’s sure about. Miki and San Francisco. So he hitchhikes from middle-of-nowhere Montana to the City by the Bay, and starts busking for spare change in front of one of the bars that Sinner’s Gin used to play in front of, hoping against hope that Miki will find him.

Instead, Damien finds Sionn Murphy, now the owner of Finnegan’s and a wounded man in search of his own answers. As they begin to tentatively reach for each other, Damien’s would-be killer finally tracks him down. Damien flees, hoping to draw the deadly fire away from the man that he might be starting to love.

With bullets and eventually body parts flying all around them, Sionn and Damien finally figure out that their two battered hearts are much better together (and safer) than either of them is separately.

By admitting they belong together, Sionn’s relationship with Damien finally gives back to Damie the one person he has missed above all – because Sionn’s cousin Kane Morgan is Miki St. John’s lover, and it’s through that extended family that Damien is exposed to the almost predatory whirlwind that is Brigid Morgan, and that he is reunited with the brother of his heart.

Just in time for the target to focus on both of them.

Escape Rating B: After the OMG moment at the end of Sinner’s Gin, I was really looking forward to Whiskey and Wry. And while I liked this one, I didn’t like it as much as the first book in the series.

So much of Miki’s personality and the depths of his heartbreak are tied up with Damien’s death. Having Damien come back to life, while it is a joyous thing, mutes some of that.

The accident that took out the band was just that, an accident. But all the crap that happens to Miki in Sinner’s Gin, and the shit that happens to Damien in Whiskey and Wry, are very deliberate. I think my WTF meter filled up somewhere along the way. It stretched my belief that two guys who were that close could have that much bad shit happen to them. I want to think that nobody’s karma is THAT bad.

Also, while the psycho that was after Miki made a certain amount of sick sense, the hit man after Damien went into bwahaha territory for me. He didn’t just murder for hire, he also carved them up and tortured them beforehand. We do find out why he’s after Damien, but we never do get to figure out why he is the way he is. Evil for evil’s sake isn’t enough for this reader.

At the same time, the guy who hired the hit man remains in the shadows. Because he stays in the shadows, and no one ever talks to him, we never get his explanation for why he started this mess in the first place. It is one hell of an elaborate scheme, even for a LOT of money. And wouldn’t it have been simpler to kill Damien back when everyone thought he was dead? How was that particular flim-flam accomplished in the first place? Who or what was buried in Damien’s place? Too much skullduggery, not enough explanation.

Again, I’m glad Damien turns out to be alive, but there’s nowhere near enough explanation for how he got dead and why, and everything else, in the first place. However, the danger that everyone is put into because Damien is alive and has escaped felt very real and very scary.

I liked the relationship building between Sionn and Damien. It happens in fits and starts, and that seemed right. They both have an awful lot of wounds that need healing, ones that they come into the story with but haven’t completely dealt with. 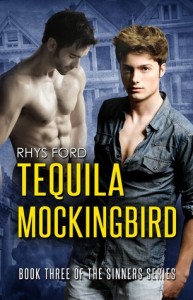 After looking at plot summaries for the next two books in the series, Tequila Mockingbird and Sloe Ride, it is obvious that there is a “getting the band together” thing going on here. But it’s not the same band – it’s going to be something new for Miki’s and Damien’s new lives. And that’s good.

3 thoughts on “Review: Whiskey and Wry by Rhys Ford”