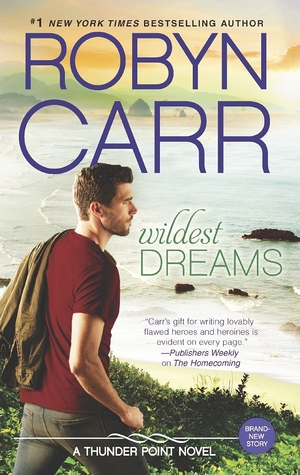 Blake Smiley searched the country for just the right place to call home. The professional triathlete has traveled the world, but Thunder Point has what he needs to put down the roots he’s never had. In the quiet coastal town he can focus on his training without distractions. Until he meets his new neighbors and everything changes.

Lin Su Simmons and her teenage son, Charlie, are fixtures at Winnie Banks’ house as Lin Su nurses Winnie through the realities of ALS. A single mother, Lin Su is proud of taking charge and never showing weakness. But she has her hands full coping with a job, debt and Charlie’s health issues. And Charlie is asking questions about his family history—questions she doesn’t want to answer.

When Charlie enlists Blake’s help to escape his overprotective mother, Lin Su resents the interference in her life. But Blake is certain he can break through her barriers and be the man she and Charlie need. When faced with a terrible situation, Blake comes to the rescue, and Lin Su realizes he just might be the man of her dreams. Together, they recognize that family is who you choose it to be.

I’ve read the entire Thunder Point series, starting with The Wanderer (reviewed here) over two years ago. This is a town where people like each other and really pull together. It’s the sort of place that most of us would like to live.

Over the course of the series, we’ve gotten to know the people, so whenever there is a new book, it is great to find out how everyone is doing. Updates on everyone we already know are interspersed with each book’s particular love story.

It’s also usually pretty obvious by the end of each book who at least one of the protagonists will be in the next story. However, in Wildest Dreams there are no clues. This feels like the last book in the series, and that we’re saying goodbye to this town and these people.

If it is goodbye, it’s a pretty good one.

There are two stories competing for attention in Wildest Dreams. One underlying thread in the last three books of the series, starting with One Wish (reviewed here) is the story of Grace Dillon Headly’s mother and former coach, Winnie Banks. After a tempestuous relationship that was both mother/daughter and coach/Olympic figure skater, Winnie and Grace have finally made peace. Winnie has been diagnosed with ALS (Lou Gehrig’s Disease) and wants to have a good relationship with her daughter before it’s too late. Grace brings Winnie to Thunder Point, and the whole town befriends the newer, more approachable, Winnie.

But ALS is a degenerative disease, and one of the threads of the story in Wildest Dreams is the way that Winnie, her daughter, her entourage and the whole town help Winnie cope with the inevitable.

Part of that coping is Winnie’s nurse, Lin Su Simmons and her 14 year old son Charlie. Lin Su is a single mother and an excellent nurse. Those skills have served her well, as Charlie is asthmatic and required a lot of care earlier in his life. But he’s 14 now and ready to grow up and escape his mother’s extremely tight apron-strings. He just needs to learn to manage his condition for himself, instead of by his mother’s constant nagging and worrying.

And into that particular breach steps Blake Smiley, world-class triathlete and Winnie’s new next-door neighbor. Blake is willing to coach Charlie so that he can become stronger, and inculcate the self-discipline to manage his condition and himself. It’s time for Charlie to learn, if not to fly, at least to bike and swim and run like other boys.

But in the process of befriending Charlie, Blake runs right into his beautiful and fierce dragon of a mother, who is too scared to let Charlie manage his own care, and too proud to accept help from anyone. Especially a man who might betray her just the way that Charlie’s father did.

Escape Rating B-: So in this story we have Winnie and her management of her condition, as well as how everyone around her is coping with it. We see the way that Winnie has found happiness by finally letting people into her life, while at the same time she mourns the loss of her independence. There is a lot of bitter mixed in with the sweet. And the other way around.

So many of the women in the previous stories are not just pregnant, but very pregnant as this book continues. Including Grace. They are all hoping that their children will be born together, and will become friends for life. Maybe there is a Thunder Point Next Generation somewhere down the road.

But the interlocking pregnancies give readers a chance to catch up with the other couples. One always wishes them happy.

The other main thread of the story is Charlie, Lin Su and Blake. Charlie is growing up. Lin Su isn’t anywhere near ready to cope. He was very, very sick as a baby and little boy, and she is used to being the authority on all things. But 14 is when we start breaking away from our parents if we haven’t already, and it’s time.

Lin Su has had a rough life. It’s not just that she is a single mother, but the way that it happened, and also the way that she has coped with it. She has concealed her origins from Charlie as much as possible, and refuses to discuss his father, her family or any part of the past that has made her so closed off and bitter.

At 14, Charlie is not merely old enough to challenge those assertions, but he is more than internet savvy enough to look for his own answers.

Then there’s Blake Smiley. If Charlie had been shopping for a role model, Blake would be it. But Blake’s views on what Charlie wants to do run absolutely opposite of the way that Lin Su needs to keep control. The problem is that Blake is right, and Lin Su is angry about it. Angry enough to keep pushing him away, not just his desire to help Charlie, but also his desire for her. And hers for him.

Blake is awesome. He’s a really great guy. And when Lin Su continually rejects him and rejects his help for Charlie, she shows just how angry and bitter and closed off she is. While the reasons for her behavior make sense from her perspective, I cringed every time she held Charlie back. Even with his childhood asthma, she was crippling him from being everything he could. She thought she was holding him closer, but what she was really doing was pushing him away.

Having finished the story, I’m not sure the romance was necessary for this one. And I’ll admit I didn’t feel it. While it was easy to see how Lin Su turned out the way she did, it did not make her an easy character to like. Blake’s training and mentoring of Charlie made for enough of an emotional connection that the emphasis on that part of the equation worked much better than the romance.

However, the non-romantic part of the HEA that the author gave Lin Su and Charlie packed an incredible punch.

I’m giving away a paperback copy of Wildest Dreams to one lucky U.S. commenter.