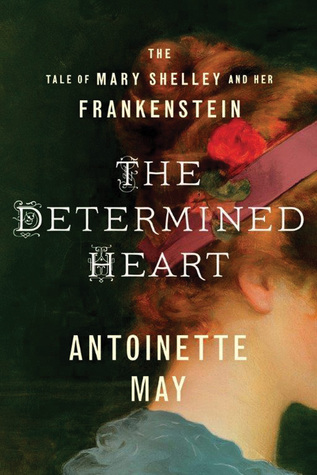 The Determined Heart reveals the life of Mary Shelley in a story of love and obsession, betrayal and redemption.
The daughter of political philosopher William Godwin and feminist Mary Wollstonecraft, Mary Shelley had an unconventional childhood populated with the most talented and eccentric personalities of the time. After losing her mother at an early age, she finds herself in constant conflict with a resentful stepmother and a jealous stepsister. When she meets the Romantic poet Percy Bysshe Shelley, she falls deeply in love, and they elope with disastrous consequences. Soon she finds herself destitute and embroiled in a torturous love triangle as Percy takes Mary’s stepsister as a lover. Over the next several years, Mary struggles to write while she and Percy face ostracism, constant debt, and the heartbreaking deaths of three children. Ultimately, she achieves great acclaim for Frankenstein, but at what cost?

One of the enduring tales about Mary Shelley is the story of the dark, stormy and miserable night in 1816 when Lord Byron challenged all of his guests to write a ghost story. Out of that challenge came the foundation of two branches of fiction – John Polidori’s The Vampyre, the precursor to Bram Stoker’s more famous Dracula, which is the basis for vampire fantasy and the fiction of the paranormal; and Mary Shelley’s Frankenstein, which is the foundational work of science fiction.

Frankenstein, or, The Modern Prometheus, was first published in 1818. Her post-apocalyptic novel The Last Man, was published in 1826. Those two works predate everything else we think of as science fiction. Jules Verne and H.G. Wells came later, writing at the end of the 19th century.

But what about Mary Shelley herself? Who was this woman? What shaped her into a woman who could invent this iconic story of a lonely man and his equally lonely monster, forever tied together and forever separate from the rest of mankind?

The Determined Heart is an attempt to tell Mary’s story from Mary’s point of view. It’s an interesting idea, but runs into a few, actually more than a few, problems in the execution.

We all know the bare bones of her life. Her father was a radical philosopher. and her mother was Mary Wollstonecraft, the author of A Vindication of the Rights of Woman. But Mary Wollstonecraft died not long after her daughter was born, so the shaping of Mary Shelley was left to others.

Mary Shelley was married to one of the most famous poets of the early 19th century, Percy Bysshe Shelley. But the story of their elopement and eventual marriage is only the stuff that dreams are made of if those dreams include a lot of poverty and an incredible amount of selfish self-absorption on all sides.

Their story, Mary Shelley’s story, reads more like tragedy than romance, with occasional forays into farce. It’s not a pretty story, but then, neither is Frankenstein.

Escape Rating C: This was a story that gave me fits. While on the one hand, I wanted to learn more about Mary Shelley, on the other hand, the way that this story was told made me want to shake every single one of the participants. But I definitely got caught up in the story. The more I wanted to slap some sense into most of them, the more engaged I got.

This is not a likable bunch of people. Some of that has to do with their own behavior, and some of it I’ll confess with my 21st century perspective. I kept having to remind myself that women in the 19th century had no political identity, potentially very little personal freedom, and very few respectable or even economically reasonable ways to make a living. Which meant that they more than occasionally acted like doormats or attached themselves to men who could support them whether there was any love or even respect involved or not.

Just the same, most of the behavior of most of the participants in Mary’s story come off as downright appalling. Another factor, and one we forget, is that they were all so incredibly young during these events, and quite often exceedingly immature with it.

Mary’s stepmother Jane Clairmont is portrayed as the quintessential evil stepmother. And it is not just that she favored her own daughter over Mary and her half-sister Fanny, but that she treated Fanny like Cinderella, with no handsome prince on the horizon. Fanny became a drudge while Claire Clairmont got spoiled rotten. Very rotten.

When Percy Bysshe Shelley seduced Mary into leaving with him, Mary is 17, Bysshe is 21, and 17-year-old Claire invites herself along because she’s bored and wants to steal Bysshe from Mary. Bysshe is meanwhile leaving his pregnant wife behind to run off with Mary and Claire. He also at least half-heartedly flirted with poor Fanny, so she ends up alone, overworked and desperately depressed.

As people, they don’t improve. Fanny eventually commits suicide, as does Bysshe’s poor estranged wife, finally allowing him to marry Mary and acquire a thin veneer of respectability. We see this strange menage travel from one escapade to another, with Bysshe having affairs with every woman who catches his fancy while Mary gets pregnant and loses three children.

One of the ongoing themes in the story is the way that Mary continues to let Claire push her around. Claire has an extremely forceful personality, but Mary seems to lose all self-respect when Claire is in the picture. Or Mary keeps giving into Bysshe who always wants another woman around for inspiration, no matter how much he loves Mary. This is the part that sent me furthest round the bend. I found it difficult to believe that the intelligent woman who later managed to make a living with her writing couldn’t find a way of getting the odious Claire out of her life.

We see all the characters, including their charismatic friend Lord Byron, as petulant, impulsive, self-indulgent and very, very young. If this were a complete fabrication instead of historical fiction we would still know that it won’t end well. Which it didn’t.

That Mary finally grows into herself upon Bysshe’s death is the redemption of her story, but the parts that detail her life after his accidental drowning at age 29 are given woefully short shrift. 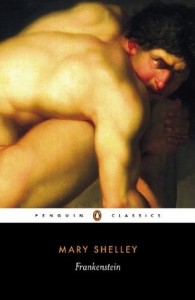 Frankenstein is a work of towering genius. Unfortunately, this fictionalized biography of its creator reads as if it were intended as a new adult romance, and stops just when she gets to be the mistress of her own fate. There is absolutely nothing wrong with new adult romance, but I expected more from this book and especially from these people as characters in it. Which doesn’t make this portrait less true, but does make the characters more infuriating.

Next year is the 200th anniversary of the publication of Frankenstein. As a fictionalized introduction to the life and times of its creator, The Determined Heart is flawed but interesting. I hope that there will be more treatments of Shelley’s life and work as the anniversary moves closer.

I am giving away a copy of The Determined Heart to one interested U.S. or Canadian commenter.

11 thoughts on “Review: The Determined Heart by Antoinette May + Giveaway”