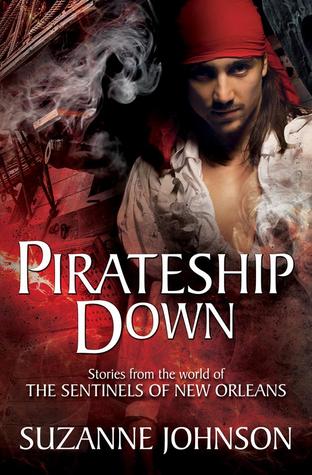 From award-winning author Suzanne Johnson comes the first story collection set in the Sentinels of New Orleans world, including the all-new novella, Pirateship Down.
French pirate Jean Lafitte is tall, cobalt-eyed, broad-shouldered and immortal. What’s not to love? But New Orleans’ most esteemed member of the historical undead is headed for trouble: He’s determined to reclaim Le Diligent, his gold-laden schooner lost at sea in 1814 and recently found at the bottom of the Gulf of Mexico near Terrebonne Parish, Louisiana. The U.S. Coast Guard might beg to differ.
New Orleans’ wizard sentinel DJ Jaco and her merman friend Rene Delachaise can either lock Lafitte up or save him from himself, joining him on a road trip to Cajun country. Terrebonne Parish—not to mention its jail—might never be the same after the events of the all-new novella Pirateship Down.
Wizards and Cajun mermen, sexy shifters and undead French pirates. Welcome to the world of the Sentinels of New Orleans in this first collection of new and revised stories, along with a little Louisiana lagniappe.

This one is for the fans. Of which I most definitely number myself. The stories, snippets and background pieces in this collection all center around Suzanne Johnson’s fabulous Sentinels of New Orleans series. The series takes place in New Orleans beginning just after Katrina, and features the wizard DJ Jaco, newly responsible for maintaining the balance between the New Orleans we know and the Beyond, where vampires, elves and especially the historical undead hold sway.

The historical undead are creatures of history mixed with the author’s imagination. They were all real personages, but, as long as they are remembered, they can sometimes (or often) cross from Old Orleans in the Beyond to the present-day city. Because the pirate Jean Lafitte is very well, if somewhat inaccurately, remembered, since Katrina messed up the wards he can pretty much cross any time he wants. And he’s every bit as intelligent, cagey, and handsome as he ever was. Possibly more.

In the series, Drusilla Jaco, usually called DJ, is in charge of keeping the sometimes tenuous peace in the supernatural community. Lafitte is sometimes an ally, and often a thorn in her side, but always honest – even if, or especially when, DJ is not going to like what he has to say. They are friends, and possibly more. If only DJ’s on-again/off-again romance with her fellow Sentinel (and werewolf!) Alex Warin doesn’t get in the way.

The series starts with Royal Street, reviewed here, which is still one of my favorite books, and one of the most affecting stories of post-Katrina New Orleans I have read, along with The Map of Moments by Christopher Golden and Tim Lebbon. Read both for a chilling portrait of the city post-apocalypse, even if you are not an urban fantasy fan. Both are awesome.

But in Pirateship Down, we get glimpses of stories that come before Royal Street, and snippets of things that happen in between the books, along with a look at some of the author’s voluminous research into NOLA and it’s colorful history.

For fans, Pirateship Down is both a treasure trove and a little lagniappe to tide us over until the next book in the series makes its much-awaited appearance.

Pirateship Down itself is a novella that takes place between the third book in the series, Elysian Fields (reviewed here) and Pirate’s Alley (here). In Elysian Fields Jean Lafitte let himself be killed in order to save DJ’s life. While his death is only temporary, it is still damn painful. In the midst of his recovery in Old Orleans, he hears news of the discovery of one of his pirate ships, mostly intact and quite likely with his treasure still on board. Jean enlists the aid of his 21st century “business” partner and his and DJ’s mutual friend, merman Rene Dellechaise in order to locate and loot his ship before the authorities remove all his gold. DJ, feels obligated to help, in the vain hopes of keeping Jean and Rene out of too much trouble. Her failure and their eventual success showcases her friendship with both the merman and the undead pirate, and provides some unfortunately hilarious insights into law, order and piracy in the 21st century Gulf of Mexico.

Escape Rating B+: For a fan, this is gold. And the novella Pirateship Down is a glorious hoot. Anyone who is not already familiar with the world of the Sentinels of New Orleans should start with Royal Street. If you love original urban fantasy with a surprising historic twist, you’ll be glad you did.

One thought on “Review: Pirateship Down by Suzanne Johnson”