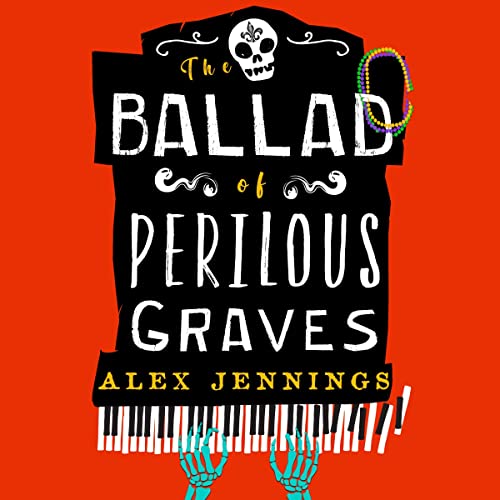 Music is magic in this novel set in a fantastical version of New Orleans where a battle for the city's soul brews between two young mages, a vengeful wraith, and one powerful song.
Nola is a city full of wonders. A place of sky trolleys and dead cabs, where haints dance the night away and Wise Women help keep the order. To those from Away, Nola might seem strange. To Perilous Graves, it’s simply home.
In a world of everyday miracles, Perry might not have a talent for magic, but he does know Nola’s rhythm as intimately as his own heartbeat. So when the city’s Great Magician starts appearing in odd places and essential songs are forgotten, Perry realizes trouble is afoot.
Nine songs of power have escaped from the piano that maintains the city’s beat, and without them, Nola will fail. Unwilling to watch his home be destroyed, Perry will sacrifice everything to save it. But a storm is brewing, and the Haint of All Haints is awake. Nola’s time might be coming to an end.

While it seems likely that every city whose biggest industry is attracting tourists has two sides, the carefully curated tourist destination and the place where real people live, there is something about New Orleans that has made it a liminal place in more ways than that usual, particularly in fantasy and magical realism.

After all, New Orleans, with its historical transformations from French to Spanish to American, and its equally subversive retentions of everything it wants to hold dear from each iteration, whether on the literal surface, the figurative underground, or its signature combination of the two in its haunting but necessary above ground cities of the dead is just ripe – if not a bit too much so – for stories where the past and present collide, where the dead visit the living and where one version of the city lies on top of, underneath, or side by side any or all of the others.

In other words, the concept that New Orleans has either managed to split itself or has been split into two cities, the “real” New Orleans we know and the “realer than real” Nola is not so farfetched. At least not when it comes to this particular city.

What makes The Ballad of Perilous Graves both fascinating and fun is the way that it teases the reader with its two perspective that combine into one epic coming-of-age and coming-into-power quest, led by two characters who may or may not exactly be separate and may or may not be seeing the same – or even similar – cities.

But who must find their way somehow into the same quest to save the same place, the city that they both love – no matter who or what they have to sacrifice along the way. 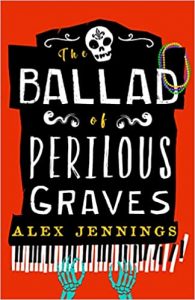 Escape Rating A-: I am a sucker for stories about New Orleans so I was all set to love The Ballad of Perilous Graves. Which in the end I did, although it took awhile to get me there. This is one of those books where the audiobook, as read by Gralen Bryant Banks, carried me over to the point where the story got its hooks into me and didn’t let go.

At first, there’s just a lot of setup to get the reader into this version/vision of the city. Part of the reason it took me a bit to get there was that the initial point-of-view character is rising sixth grader Perilous (Perry) Graves. The Graves family, Perry, his little sister Brendy and his parents, Deacon and Yvette, live across the street from Peaches Lavelle, who seems to be 12 or so and seems to be the strongest person in the world – or at least in Nola. Peaches and her VERY magical adventures at first made me wonder if Perry was dreaming this whole thing, whether he was making it up, or whether he was seeing what he wanted to see instead of what actually was. Because his Nola didn’t quite match up to reality and Peaches was kind of the icing on that particular cake.

It was only when the perspective switched to the adult Casey Ravel that I figured out that whatever was happening was “real” for the story’s own version of reality. Also, Casey’s reality matched up to real reality considerably more than Perry’s did. Which should have clued me in that their realities were not exactly the same reality – at least not at first – but it took me an embarrassingly long time to get there.

The quest is really Perry’s quest, and it begins in Nola. Someone is killing the songs that are the foundation of the city’s identity, and havoc is being wrecked on both sides of that divide. So the overarching story is Perry’s hero’s journey, his coming of age as he takes on the mantle of his family’s inherited magic to save his friends and family, and his city.

It is, of course, a journey that leads him through some very dark places, to versions of Nola that are even more magical than his own and to places that exist on no map that has ever been printed. Because New Orleans is that liminal place where all versions of the city link, from the magical to the mundane, from the living to the dead, and everywhere in between.

It’s also a quest to find his grandfather, who was kidnapped at the beginning of the story by a haunted man – or ghost, or song – on a mission to retrieve something that Daddy Deke doesn’t even remember that he has.

There is a LOT going on in this story. So much. I’m sure there are parts I didn’t quite get, or parts that I thought I did because this isn’t my first trip to a magical version of New Orleans BUT that I got completely wrong but got enough to keep me in the story. And that’s both fine and fantastic. Not every book has to be for me (and shouldn’t be) for me to enjoy the hell out of it.

This is a magical, mystery tour of the city. It’s a hero’s journey both for Perry and for Casey, and both young men – because Casey is still young and Perry may be very young but is a man by the end of the book – it’s a coming into power story. For Perry it’s a coming of age story as well. For Casey it also feels like an acceptance story, but we don’t get nearly as much of Casey as we do of Perry, as much as Casey serves to ground the story in a bit of the real in its early stages.

But it’s also such a wild ride to so many wild and diverse visions of New Orleans that, as unique as the author’s voice is – and it most definitely is – the ingredients in this gumbo reminded me of other urban fantasies and especially other New Orleans stories. So if you’re looking for something that recalls bits of The Ballad of Perilous Graves, here’s my list of books it made me go looking for: The Map of Moments by Christopher Golden and Tim Lebbon, The City of Lost Fortunes by Bryan Camp, The Sentinels of New Orleans by Suzanne Johnson, Chasing the Devil’s Tail by David Fulmer, with a bit of The City We Became by N.K. Jemisin, Edinburgh Nights by T.L. Huchu, Last Exit by Max Gladstone and No Gods, No Monsters by Cadwell Turnbull for embodied cities, extra dead bodies and talking thereto, ways to get into alternate worlds and hiding monsters in plain sight.

The Ballad of Perilous Graves is the author’s debut novel, which I had to look up because OMG it’s wonderful and crazy and I’m expecting more marvelously wild and great things. And hopefully more New Orleans.