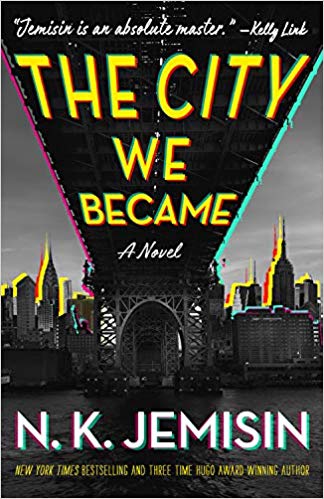 Five New Yorkers must come together in order to defend their city in the first book of a stunning new series by Hugo award-winning and NYT bestselling author N. K. Jemisin.

Every city has a soul. Some are as ancient as myths, and others are as new and destructive as children. New York City? She's got five.

But every city also has a dark side. A roiling, ancient evil stirs beneath the earth, threatening to destroy the city and her five protectors unless they can come together and stop it once and for all. 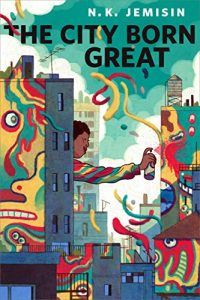 Four years ago, N.K.Jemisin published what was then a standalone short story, The City Born Great. It’s the story of a city, specifically New York City, as it is born, or perhaps reborn, as one of the great, self-aware and self-conscious cities of the world. It’s also the story of the city choosing its combination midwife and avatar, a young black man, a homeless graffiti artist, who embodies the city in all of its grand, glorious and sometimes shady history and all of its sprawling, brawling glory. And who directs and embodies its fight to be born against the wishes and will of a great, but nameless and faceless, enemy.

The story was also included in the author’s 2018 collection, How Long ‘Til Black Future Month?

But the original story ended on a happy note, with New York City’s avatar on his way to help the next new city, Los Angeles, with its imminent birth and induction into the ranks of the “great cities”.

That original story is included as the prologue to The City We Became, but without that happy ending. Instead, the newly born New York City wins his battle, but is forced to withdraw from the field to heal his grievous wounds.

And that’s where this marvelous book, the opening chapter in a projected trilogy, begins. With the central avatar out of the picture, and the avatars of the cities that make NYC what it is, the avatars of the 5 boroughs, coming to awareness of their roles with absolutely no help or guidance – while the battle their primary fought moves to a new and even more potentially catastrophic phase.

The personifications of those five boroughs, those places that could be cities in their own right, have a job to do. Find the primary, become the city they were meant to be, and send the forces of their great enemy back to the shadows from which they sprang.

But the enemy’s avatar will not go quietly – and she has one of their own tucked tightly into her rapacious grasp.

Escape Rating A++: I’m pretty sure that this is next year’s Hugo AND Nebula winner for Best Novel. I can’t believe I’m saying that and the year still has 8 months to go, but this story was so marvelous that I can’t believe anything will top it the rest of the year. (Not that there isn’t plenty of interesting SFF yet to come, but this one is just beyond awesome.)

There have been plenty of stories wrapped around the concept of a genius loci, or spirit of a place, including last year’s marvelous Silver in the Wood. But The City We Became takes that concept to a whole new level, with the city not just having one, but six of them (the plural is genii locorum). The way that this story takes that concept and magnifies into a race of such “city beings”, with hints of a society of them, works so well it feels like it has always existed. That there is a council of such beings, and that they have a great enemy, moves the concept from its origin in Roman religion (I said there were plenty) right into SF and Fantasy. And that’s kind of where this story sits, squarely on the borderline between the two genres.

It reads as SFnal, but the fantasy feels like the story’s true home – especially after the big reveal near the end! But those SFnal elements are definitely there, especially the element of SF as a romance of political agency. Because the machinations of political agency and political corruption turn out to play a much bigger role than that council of city avatars originally believed.

At the same time, while the story is building and we are getting to know these people and places – and the places/people – the operations of the Woman in White, the embodiment and avatar of the great enemy, reminded me so very much of the operations of the Black Thing on Camazotz in A Wrinkle in Time.

There are also oodles of Lovecraftian allusions scattered throughout the story, to the point where Lovecraft becomes Chekhov’s Gun. But I was still shocked and awed when the Woman in White turns out to be the avatar of R’lyeh, the lost city of the Cthulhu Mythos. If her mysterious boss turns out to be the Great Old One himself it’s going to be seriously – and marvelously – freaky. But I’m guessing, we don’t know yet.

What we do know is that this is a well-thought out and marvelously written story of the battle for the soul of the city, rife with allusions to NYC’s beliefs in itself and fights with itself. The individual avatars are distinct characters that blend the ethos of each of their boroughs with the characters they are as individual humans. They don’t become the boroughs, they embody the boroughs because they already do.

The avatars of the NYC boroughs have to find a way to work together, even as all of their instincts tell them to fight. And also tell them that they can’t win without their missing member, the reluctant, stand-offish, contrary and captured Staten Island. They’ve almost lost hope, until they figure out that the city they are becoming isn’t about geography, it’s about being in “A New York State of Mind”.

I loved this author’s, Hundred Thousand Kingdoms. I bounced hard, multiple times, off of her Hugo-Award winning Broken Earth series. But The City We Become isn’t like either of those. It’s its own wonderful thing. It’s also absolutely the best thing I’ve read this year so far, and I’m not expecting much, if anything, to top it. What I am expecting, and am, in fact, eagerly awaiting, is the second book in the trilogy. May it be soon!