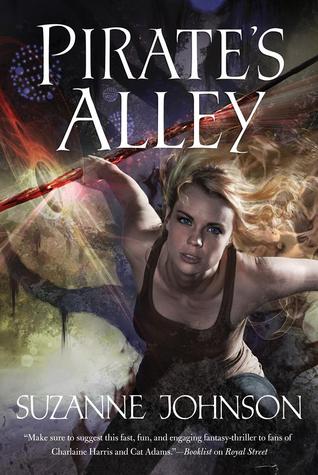 Wizard sentinel DJ Jaco thought she had gotten used to the chaos of her life in post-Katrina New Orleans, but a new threat is looming, one that will test every relationship she holds dear.

Caught in the middle of a rising struggle between the major powers in the supernatural world—the Wizards, Elves, Vampires and the Fae—DJ finds her loyalties torn and her mettle tested in matters both professional and personal.

Her relationship with enforcer Alex Warin is shaky, her non-husband, Quince Randolph, is growing more powerful, and her best friend, Eugenie, has a bombshell that could blow everything to Elfheim and back. And that’s before the French pirate, Jean Lafitte, newly revived from his latest “death,” returns to New Orleans with vengeance on his mind. DJ’s assignment? Keep the sexy leader of the historical undead out of trouble. Good luck with that.

Duty clashes with love, loyalty with deception, and friendship with responsibility as DJ navigates passion and politics in the murky waters of a New Orleans caught in the grips of a brutal winter that might have nothing to do with Mother Nature.

War could be brewing, and DJ will be forced to take a stand. But choosing sides won’t be that easy.

Pirate’s Alley, like all of the titles in Suzanne Johnson’s Sentinels of New Orleans series, is a street in New Orleans. In this particular case, Pirate’s Alley is a two-block-long pedestrian walkway between Royal Street and Jackson Square, at least according to Google maps and Google street view.

As a title, it also represents some of the events in the story. From Sentinel Drusilla Jaco’s perspective, it looks a lot like her own particular pirate, the historically undead Jean Lafitte, is building either a coalition or perhaps an army of preternaturals in the same way he build his pirate army in his real life. He takes on the dispossessed and the disaffected, and gives them a home and something to believe in.

In New Orleans, the boundary between what we call the “real” world and the Beyond was always thin. But Katrina reduced that thin (and always a bit permeable) line to absolutely nothing. And the powers-that-be, in this case the Wizard’s Council, have decided to make a virtue out of necessity and remove both the physical barrier and the rules and regulations that have kept the preternaturals out of the city, or hidden, for centuries.

New Orleans has become again what it has always been, an living experiment in extreme multiculturalism. Only in this case, it’s the wizards and the shapeshifters and the two-natured and the vampires and the elves and the fae and New Orleans own special part of this mixture – the historical undead.

After the events in the first three books, Royal Street (reviewed here), River Road (here) and Elysian Fields (here), the preternatural community is gearing up, or winding down, to one big and probably deadly showdown.

The events in Pirate’s Alley all center around that upcoming conflict, with Sentinel DJ Jaco, as usual, caught squarely in the middle.

Pirate’s Alley is much more about political maneuvering than any deeds of derring-do, not that there aren’t some of those. Most of the action takes place at the several attempts to hold an Interspecies Council Meeting, and all the various and sundry ways that meeting keeps getting interrupted, hijacked and or just plain destroyed. Unfortunately along with the building it’s being held in.

It seems as though every single faction has an internal conflict, one that is being fought both at the Council table and in bloody assassinations back at home. And DJ is firmly stuck in the middle of every single one of those conflicts, whether she wants to be or not.

DJ is a member of the Wizards Council, and as Sentinel, she is supposed to be working for them. Which is ok until they ask her to do something that she finds not just questionable, but downright morally repugnant. So she not only refuses to obey, but finds a way to outmaneuver her boss.

Her boyfriend Alex Warin can’t make up his mind or heart whether to help DJ or obey the Council. They are his boss too, and he’s a good little soldier who generally obeys orders.

DJ’s elven bondmate is trying to get DJ to live up to the bond he forced her into, and to take control of his own faction, attempting to use DJ as leverage, bait or muscle as it suits him. It does not suit her.

The only person who seems to understand DJ and want to help her do what she thinks is right is Jean Lafitte, the leader of the historical undead and DJ’s enemy turned friend. It’s not that Jean is altruistic, because he never is, but that he sees and likes DJ exactly as she is, and pretty much vice versa. DJ isn’t totally sure how she feels about Lafitte, but she knows he has her back.

Which is a good thing, because when the dust settles Lafitte’s Barataria estate in undead Old Orleans may be the only safe place for DJ to retreat to. With the fires of all her burnt bridges blazing behind her.

Escape Rating A-: As much as I loved this one, I will say that the politics are starting to get extremely convoluted. I hope that book 5 comes with a guide or cheat sheet or dramatis personae, complete with affiliations. Or a summary in the prologue.

DJ is the center of the story. It’s not just that she is telling it in the first person, but also that all the action revolves around her. She has ties to every group, some friendly, some not at all, but she connects in some way to every faction. Except that fae, and it looks like that connection is forming at the end of the story. Also the fae are Jean Lafitte’s business partners (nearly everyone is) and DJ is certainly connected to Lafitte. The question that lies between them concerns the nature of that connection.

In the story, every faction is gearing for war. They are also, for the most part, individually self-destructing as the status quo falls to pieces. A significant chunk of the conflict causes collateral damage among the human population that is supposed to remain ignorant of their collective existence.

With the Winter Prince of the Fae bringing an unnatural Arctic winter to New Orleans, that can’t possibly last.

A significant chunk of the stated conflict, as opposed to the underground one, revolves around DJ’s best friend Eugenie, who also represents that human collateral damage. Because all the factions have an agenda for the baby that Eugenie is carrying as a result of the Elven leader Quince Randolph’s pursuit of DJ by way of her best friend. Eugenie is now caught in the middle, and DJ is right there with her, both trying to get the preternaturals to stop arguing about Eugenie and the baby as though they were mere bargaining chips and not people, and to protect Eugenie from all the preternaturals who plan to imprison Eugenie supposedly for her own safety. Or theirs. DJ wants to do right by her friend, which means doing what a whole lot of other people consider wrong.

Which is where DJ’s love life, or sometimes lack of it, comes in. DJ and Alex Warin are attempting to have some kind of relationship. But for the ultra order conscious Alex, DJ the chaos magnet is often more than he can handle. He always finds himself caught between helping DJ and keeping to the straight and narrow that he prefers. And DJ finds herself making excuses and pretending to be someone other than she is in order to keep the relationship going.

She does not know what she feels for Lafitte. But she trusts him. Not to always do what DJ believes is the right thing, but to always be honest about whatever scheming he is doing. And he always has her back – he’s already died once to prove that to her. But most important of all, Lafitte likes and respects and enjoys her company for who she really is, and not someone she pretends to be.

So in the midst of all the chaos, DJ is stuck in her own personal quandary, with no end in sight for either conflict. It’s a perfect set up for book 5. Which can’t come soon enough for me.