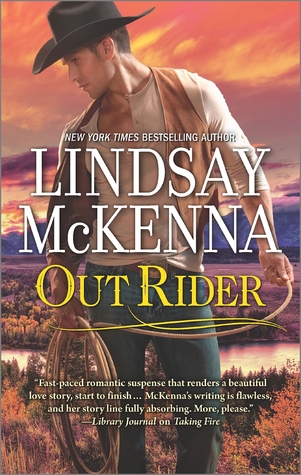 With her return to Jackson Hole, Wyoming, New York Times bestselling author Lindsay McKenna shows how love can find a way out of the darkness…
A fresh start—that's all Devorah McGuire wants. As a former Marine and current Ranger with the US Forest Service, she's grown accustomed to keeping others safe. But when the unthinkable happens, she can only hope that a transfer to Jackson Hole, Wyoming, will allow her to put the past behind her for good.
Dev's mentor at Grand Tetons National Park is fellow canine handler and horseman Sloan Rankin. He shows Dev the spectacular trails, never knowing the terror that stalks her every move. Despite her lingering fear, Dev feels an attraction for Sloan as wild as their surroundings.
With Sloan, Dev can envision a new life—a real home. Unless a vengeful man fresh out of prison succeeds in finishing what he started… 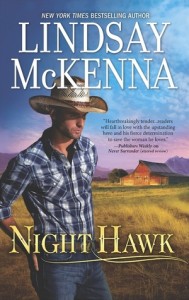 I picked up Out Rider because I enjoyed the previous book in this series, Night Hawk. But Night Hawk was book 10 in the Jackson Hole series, and Out Rider is book 11. While I didn’t feel that I was missing anything in Night Hawk by not having read the rest of the series, Out Rider has a lot of very lovely involvement with previous couples and other characters in the series, and I did feel a bit left out.

I also had some mixed feelings about the plot, but not enough to keep me from enjoying the story.

The community near Jackson Hole is just outside Grand Teton National Park, and has featured Park Rangers before. Both the heroine Devorah McGuire, and the hero, Sloan Rankin, are Park Rangers with the U.S. Forest Service. But both of them are just slightly different from most of the Rangers.

Dev is a tracking specialist, aided and abetted by her beautiful yellow labrador, Bella. Sloan is the Rangers’ farrier, shoeing and caring for all of the horses and mules used by the Park and its Rangers at Grand Teton and Yellowstone. Sloan has been at Grand Teton for about three years, after a disastrous marriage and divorce. Also after serving in Iraq as part of a partnership with his combat trained Belgian Malinois, the utterly inappropriately named Mouse.

When Dev and Sloan meet on the road heading for Jackson Hole, they have a lot in common. Both are ex-military (Dev was in the Marines), both are dog handlers, both are Rangers. But Dev has just arrived at Grand Teton for a fresh start, after she was attacked at her previous posting in the Great Smokies by another Ranger.

Dev is hoping that her change of venue will leave her stalker, now ex-Ranger Bart Gordon, as well as all the good-old-boys who ignored all of her warnings and defended her attacker, in her rearview mirror.

It turns out that she’s left the good-old-boys, but not the stalker. Or there wouldn’t be a story.

But first, Dev has the chance to settle into her new job, and to start shaking off the fear and mistrust left behind by not just the attack, but they way that all of the people who should have listened to her ignored her and failed her on every level. It’s the story that we all fear, that a clever man will descend into abuse and violence, but no one believes the woman because the guy is a friend. It’s sad and sick but all too common.

Bart comes to Jackson Hole to get revenge on the woman who turned him in. And it’s a revenge that he does not intend for Dev to survive. But this time, both the Park and the law have her back, and the hunter becomes the hunted much, much faster than he planned on.

Dev has finally found a new life worth living for, if she can just manage to survive the shadows from her old life.

Escape Rating B-: The romance in Out Rider is a slow burn, and that’s as it should be. At the beginning of the story, Sloan is just thinking that he might be ready to stick his toe into dating again, but he isn’t interested in getting into a long-term relationship. He’s still very gun-shy after his disastrous marriage.

Dev is in an even worse case than Sloan. The attack by her stalker is barely six months in the past, and it has shaken her faith in men and in her own judgement very badly. Perhaps a bit too badly.

Dev keeps beating herself up that she didn’t see just how twisted her stalker was before he finally attacked her. The depth of her questioning her own judgement seems a bit too much. She was not dating the bastard. She recognized very early on that something wasn’t quite right about the guy, and avoided him as much as possible. She reported his behavior to their supervisor, and to the police, who both did nothing except laugh it off and blame her for overreacting. But her judgement was spot on from the very beginning. The system failed her, but she did not fail herself. And when push came very much to shove, she rescued herself as well, and pursued charges. That the bastard got a slap on the wrist is on the system that protected him and not on her.

I realize that it is easy to rationalize in this situation, but it still felt that the depth of her self-doubt would have felt more congruent if she had dated the guy, which she intelligently did not.

And as much as I liked Dev, the whole side business of her being an empath of some kind did not fit in with the story, except as a way to make her suffer even more. I do enjoy a bit of paranormal woo-woo in my stories, but it didn’t feel right here. Your esper rating may vary.

Sloan is almost too good to be true. Not that that’s a bad thing in a romantic hero.

The characters that stand out the most in this story, and always steal the scene, are the animals, especially the dogs Bella and Mouse. Bella is such a sweetheart, while still being Dev’s first and fiercest protector. And Mouse, well, Mouse helps to save the day.

But in the end, Dev rescues herself. And that was the best way to bring this adventure to a heartwarming conclusion.

We’re giving away a copy of Out Rider to one lucky U.S. or Canadian commenter.

10 thoughts on “Review: Out Rider by Lindsay McKenna + Giveaway”