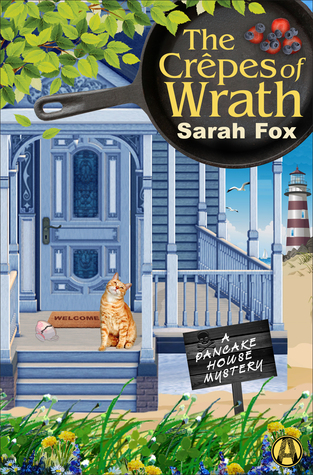 In the debut of a delightful cozy mystery series, Sarah Fox introduces a charming new heroine who finds herself in a sticky situation: stacking pancakes, pouring coffee, and investigating murder.
When Marley McKinney’s aging cousin, Jimmy, is hospitalized with pneumonia, she agrees to help run his pancake house while he recovers. With its rustic interior and syrupy scent, the Flip Side Pancake House is just as she pictured it—and the surly chef is a wizard with crêpes. Marley expects to spend a leisurely week or two in Wildwood Cove, the quaint, coastal community where she used to spend her summers, but then Cousin Jimmy is found murdered, sprawled on the rocks beneath a nearby cliff.
After she stumbles across evidence of stolen goods in Jimmy’s workshop, Marley is determined to find out what’s really going on in the not-so-quiet town of Wildwood Cove. With help from her childhood crush and her adopted cat, Flapjack, Marley sinks her teeth into the investigation. But if she’s not careful, she’s going to get burned by a killer who’s only interested in serving up trouble.

This is a very cute start to a new cozy mystery series. On the one hand, it’s a bit light and fluffy, sort of like the pancakes at The Flip Side Pancake House. On that other hand, the red herrings are savory enough to be served at one of the dinner options in beautiful Wildwood Cove.

The story starts out a bit in the middle, but in a good way. As events begin, Marley McKinney is taking a vacation from her job in Seattle by covering for her cousin Jimmy at his pancake place while Jimmy is recovering from pneumonia in the hospital. We don’t need to see Jimmy get sick or Marley go through her decision process about helping Jimmy out. By the time we meet Marley, she is starting to think about what she’ll do when Jimmy gets out of the hospital and back on his feet. And we see that the residents of Wildwood Cove and the regulars at The Flip Side have taken her into their hearts.

Jimmy is more her mother’s cousin than hers, and Marley has very, very fond memories of visiting Jimmy and his late wife, Grace, when Marley was young. After Grace’s death, the visits tapered off, but Marley and her mother still kept in touch with Jimmy. He was one of the few relatives they have left – and he seems to have been a really nice guy.

Past tense. Because the mystery that Marley takes it upon herself to solve is the mystery of who killed Jimmy, a man that nearly everyone in the small community seems to have loved. Jimmy’s death is tied into a second mystery – who stashed stolen goods in Jimmy’s generally unused shed?

As Marley pokes her nose into places it really doesn’t belong, we get to know the good people (and the bad people) of Wildwood Cove. While Marley spent her childhood summers here, the world has moved on and there are lots of new people in this little coastal town. Some of whom are lovely, and some of whom are, as the old saying goes, “no better than they ought to be” but in different ways.

Marley is left trying to pick through the pieces of what Jimmy left behind, and what Jimmy might have been into that could have caused his death. When the news gets out that Marley inherits both the house and the restaurant, the buzzards start circling. Some want the house, some want the business, and some just want to take back anything incriminating that might be left in Jimmy’s house.

It’s up to Marley to help the police figure out which of the many frightening events, home invasions and business break-ins have to do with Jimmy’s death and which are just their own separate nastiness.

All the while trying to figure out what her own future should be. Should she keep the home and business she has come to love – even though she knows nothing about running a restaurant and has a life back in Seattle? Or should she go back to the city, knowing that she is leaving her heart behind/

And will she have to die before she gets everything figured out?

Escape Rating B+: I think this may be one of those series where if you fall in love with the people and the place, it just works. Wildwood Cove feels like a nice place to visit, and I wouldn’t mind living there. But like every small town, at least in fiction, not every person is a gem and not everyone is someone you would want as your neighbor.

Marley is an interesting heroine because her life is completely in flux. The longer she stays at Jimmy’s and runs The Flip Side for him the more she sees how hollow and lonely her life is in Seattle. She has few connections back in the city that she misses or that miss her, while in Wildwood Cove nearly everyone has become connected to her, through the pancake house if not in other ways. She’ll be missed when she goes back to the city.

Jimmy’s death changes her life. Not just because she feels compelled to investigate that death, but because Jimmy leaves her his house, his restaurant, and most of his rather significant accumulated savings. He knew that Wildwood Cove was where her heart belonged, and he gave her enough resources to make that very nebulous dream come true. She feels both incredibly grateful and terribly guilty. She always cared, but didn’t see nearly as much of him as she feels she should have. Especially now that he is gone.

Those childhood summers were clearly the highlight of her life. It feels like the icing on a very yummy cake when her childhood crush turns up at her door, all grown up and much, much handsomer than she imagined he could grow up to be. And he’s a big part of her dilemma. She wants the chance to explore what they might have as adults, but giving up her life in Seattle for a whole lot of uncertainties is a big step that she quite reasonably isn’t ready to take, especially in the midst of all the upheaval.

Again, on my other hand, the sheer number and depth of the tragedies that Marley experienced in her past felt a bit like “piling on”. They felt over-the-top and they didn’t seem to be a big part of the baggage she was carrying, at least for the depth of the tragedies. But it may be a building block for the next book. We’ll see.

And then there’s the mystery. Or rather, mysteries. Jimmy was murdered. There has been a rash of home invasion robberies up and down the coast, and some of the stolen goods were stashed in Jimmy’s shed. Someone breaks into The Flip Side after hours, and there are multiple break-ins at Jimmy’s house. Some of this rash of crimes is probably connected, but which parts?

Although Jimmy was almost universally liked, there’s a difference between almost and universally. His neighbor wanted to drive him out of his house, so he can bulldoze it and turn it into another post-modern monstrosity. Jimmy’s supposed ex-ladyfriend wants to strip the house of all of Jimmy’s valuables that aren’t nailed down. And someone is trying to run Marley off the road, out of business and out of town.

Figuring out which crimes are connected and which are coincidental keeps the reader, and Marley, guessing until the very end. And that’s a great thing for a mystery. I am very, very curious to see how Marley and this series get on in book 2, For Whom the Bread Rolls.