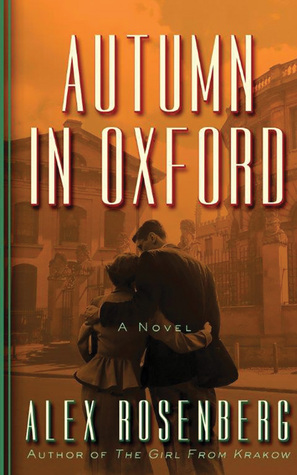 After being blacklisted for having communist sympathies as a student twenty years before, Pulitzer Prize–winning historian Tom Wrought escapes America’s Cold War climate to teach at Oxford. There, he falls in love with Liz Spencer, a beautiful married woman. When Liz’s husband is pushed in front of a train in the London Underground, Tom is immediately arrested for the murder. Scotland Yard is convinced it has its man, as he had means, motive, and opportunity.
Certain of his innocence, Liz hires a young solicitor, Alice Silverstone, to defend Tom. But they discover that Tom’s former secret work as an American spy made him a number of powerful enemies. Russian intelligence, British counterespionage, and even the FBI all may have reason to frame him. If Liz and Alice can find out who is behind the murder, they stand a chance of freeing Tom, but doing so puts all their lives at risk.

Autumn in Oxford is a conspiracy theorist’s dream of a novel, set during the period of one of the craziest conspiracies of all – the Red Scare of the late 1950s. It’s even presided over, in a rather perverse way, by the queen conspiracy theorist of all, J. Edgar Hoover.

And once the story gets going, it doesn’t let the reader go.

At first, this seems like a simple thriller. A man is pushed into an oncoming train by a mysterious assailant and is instantly killed. But of course it isn’t nearly that simple.

Tom Wrought witnesses Trevor Spencer being shoved off that train platform and knows that he is in deep, deep trouble. Tom was on his way to a rendezvous with Spencer’s wife. He knows that he has the obvious motive for killing the man, and that witnesses will eventually place him at the scene, especially since the real killer bears at least a passing resemblance to himself.

So Wrought pretty much does everything an innocent man shouldn’t do. He runs out of the station, chasing the real killer. He leaves the scene of the crime in a way that draws attention to himself. He stops to phone his lover to tell her that she should go home to meet the cops, who will inevitably come to give her the “bad” news.

He knows that he didn’t do it. So who did? And why?

And that’s where the fascinating part of this book begins. Not with the recitation of the beginning of Tom’s affair with Liz Spencer, but with what happens next. And with what happened in Tom’s life long before this little mess. All the events and chances that dropped Tom into the soup at this point in time, and why they have all come to a head now and not earlier. Or later.

And all the things that people in high places will do to get Tom both locked up and discredited. The collateral damage of a little murder isn’t even the worst act they commit. But watching Tom, Liz and their attorney unravel the conspiracy, piece by ugly piece, is one hell of a story.

Escape Rating A-: In the end, I absolutely loved this book. But it needs an editor. The affair between Tom and Liz is the least interesting part of the entire story. It’s only purpose is to provide the means and method for what follows. And frankly, the reader knows enough about their affair when Tom witnesses the murder that we don’t need the complete rehash. It’s what happens after the murder, and the story that Tom tells of his life before Oxford, that give this story its punch.

And what a punch it is. The Red Scare of the 1950s in the U.S. makes for very bizarre reading from the 21st century. Except where it resonates all too clearly.

Tom flirted with the Communist Party while he was in college. A lot of people did in the 1930s. Tom was also extremely anti-segregation long before integration became remotely accepted. And an awful lot of very important people in the 1930s believed that any challenge to the American status quo, including calls for integration, were automatically part of a Communist plot.

All of this makes Tom an obvious target for the powers-that-be. He’s had the fortune, or misfortune, to be in the right place at the right time to be a witness to history, and to be able to expose the lies and deceits of powerful people. J. Edgar Hoover, in particular, was not known for being merciful to those he perceived as his enemies – whether they saw themselves as his enemy or not.

The story of Tom’s life before the murder is what draws the reader in. And also what provides the motive for the murder. The ways in which Tom ran afoul of people in high places, and the underhanded means they used to strike at him without regard for either collateral damage or irreparable harm to U.S. relations with their post-war allies piles conspiracy on top of conspiracy into an unstable but absolutely compelling house of dirty little cards.

The thrill-a-minute chase at the end provides the perfect conclusion.

Reviewer’s note: I was born in 1957, two years before this book begins. While I obviously don’t remember the historical events that form the backdrop of this story, they were still very much “present” and part of the cultural zeitgeist as I was growing up. It is really weird to see times that I lived through portrayed as “historical” fiction.

I’m very pleased to say that I am giving away a copy of Autumn in Oxford to one lucky US or Canadian commenter. I really enjoyed this book, so I am very happy to be able to share it!

17 thoughts on “Review: Autumn in Oxford by Alex Rosenberg + Giveaway”