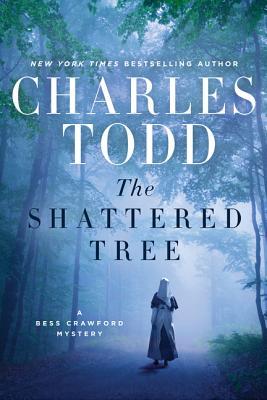 World War I battlefield nurse Bess Crawford goes to dangerous lengths to investigate a wounded soldier’s background—and uncover his true loyalties—in this thrilling and atmospheric entry in the bestselling “vivid period mystery series” (New York Times Book Review).
At the foot of a tree shattered by shelling and gunfire, stretcher-bearers find an exhausted officer, shivering with cold and a loss of blood from several wounds. The soldier is brought to battlefield nurse Bess Crawford’s aid station, where she stabilizes him and treats his injuries before he is sent to a rear hospital. The odd thing is, the officer isn't British--he's French. But in a moment of anger and stress, he shouts at Bess in German.
When Bess reports the incident to Matron, her superior offers a ready explanation. The soldier is from Alsace-Lorraine, a province in the west where the tenuous border between France and Germany has continually shifted through history, most recently in the Franco-Prussian War of 1870, won by the Germans. But is the wounded man Alsatian? And if he is, on which side of the war do his sympathies really lie?
Of course, Matron could be right, but Bess remains uneasy—and unconvinced. If he were a French soldier, what was he doing so far from his own lines . . . and so close to where the Germans are putting up a fierce, last-ditch fight?
When the French officer disappears in Paris, it’s up to Bess—a soldier’s daughter as well as a nurse—to find out why, even at the risk of her own life.

The red herrings are much tastier, and much more substantial, than any of the meals described in this tale of Paris nearing the end of World War I. Rationing seems to have made all the food unpalatable, even if it is still served with as much French flair as ever.

Although the meals are often described with unloving detail, they are far from the point of this story.

Bess usually finds herself investigating murder in the midst of warfare – a time and place where it can be difficult to distinguish between one and the other. But this does not start out as a murder investigation, and it takes some surprising, and frequently twisted turns to get from the one to the other.

It’s the early fall of 1918, and it is beginning to look like the end of the war is at hand. Unfortunately, one of the ways that the end is being signified is for all of the forces, Allied and Central Powers alike, is to shoot off as much of their remaining ordinance as fast as possible. This war seems to be going out in a long and protracted series of very big bangs.

As a nursing Sister, Bess and her colleagues are busier than ever. Exhaustion dogs their every step. So when Bess spots a soldier who might be out of place, everyone above her in the chain of command is frankly just too damn tired to do anything about it. Until Bess unexpectedly finds herself with several days of medical leave in Paris.

That out-of-place soldier is a wounded Lieutenant in the remains of a French uniform that seems to have had all of its identification removed. While it is not completely unknown for a lost Allied soldier to find himself behind a different ally’s lines, there is one other notable thing about the man who calls himself Lieutenant Philippe Moreau. While unconscious, he speaks fluent and unaccented German. Is Moreau a German spy, or is he merely from the contested Alsace-Lorraine region, where residents were forced to use German since the end of the Franco-Prussian War of 1870?

When Moreau disappears into seemingly thin air, Bess’ instincts are aroused. Whatever Moreau is, he seems to be taking great pains to hide himself from his commanders.

Bess, wounded in a sniper attack, is sent to Paris to recuperate. She’s not wounded enough for a ticket back home, but the wound in her side becomes infected. She needs surgery and rest for healing. She’ll get neither in a forward aid station.

Bess, as usual, finds herself in the middle of multiple unfolding dramas while she is supposed to be resting in Paris. It is lucky for Bess that the mantra of “a change is as good as a rest” proves true, because rest seems to be the one thing she doesn’t get.

Under orders from her father, the Colonel Sahib, Bess has multiple officers, whether convalescent or not, instructed to keep her safe and out of trouble. Instead, Bess co-opts one after another in her search for the truth about Philippe Moreau. Only to find that nothing she has heard is true, and that there is murder at the heart of it all.

Escape Rating B+: I always enjoy a visit with Bess and her world. World War I is an endlessly fascinating period for historical fiction and historical mysteries. Bess’ perspective on her world is different for her time and place without being anachronistic. Being a nurse gave Bess much more agency and a considerably more active role in her world than she would normally have had. At the same time, she faces just enough restrictions because of her gender and class to remind us that her world was still very different from ours.

Unlike many of her previous books, in this story Bess finds herself somewhat at sea. She is a patient in the convalescent home rather than staff, and people look in on her, and attempt to look after her, much more than is usual (or comfortable) for her. Nurses clearly don’t make any better patients than doctors do.

At the same time, she is cut off from most of her usual resources. She is in France, and although she does speak the language tolerably well, she does not speak like a native and can’t hide in plain sight the way she does in England. Likewise, the powerful forces that she is able to bring to bear in England or even in her British Army nursing station are not available to her here. Here mother’s network of social contacts, and her father’s tremendous pull within the British Army are of no help to her on French soil.

She has no one she can trust the way that she does Simon Brandon, her father’s aide-de-camp and her own friend. Bess trusts Simon both in the sense that he will not betray her confidences and also in the sense that he knows her well enough not to stand in her way, and most importantly not to treat her like a delicate flower in need of his solicitous protection. Whatever Simon is or will be to Bess (and I do wonder) he knows her, likes her and respects her just as she is. A rare commodity for a woman who often steps out of what is defined as her sphere.

Bess begins by looking for a man who may be a spy, or possibly a deserter. She uncovers, as she so often does, a hidden cesspool that leads to an old murder. But as Bess is so often completely at sea during this case, the readers are a bit as well. The less she understands, and the more difficult a time she has putting things together, so do we.

But as her war draws towards its close, I can’t help but wonder what comes next for Bess. Wherever she goes and whatever she does, I can’t wait to read what happens next!

The publisher is giving away 3 copies of The Shattered Tree to lucky entrants on this tour:

3 thoughts on “Review: The Shattered Tree by Charles Todd + Giveaway”