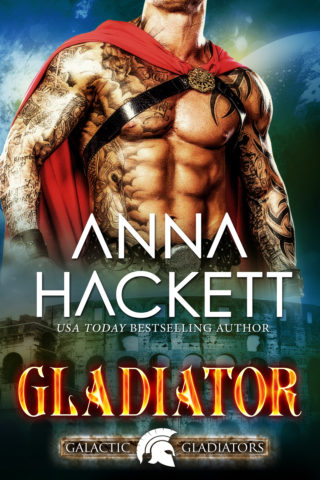 When Earth space marine Harper Adams finds herself abducted by alien slavers off a space station, her life turns into a battle for survival. Dumped into an arena on a desert planet on the outer rim, she finds herself face to face with a big, tattooed alien gladiator…the champion of the Kor Magna Arena.

A former prince abandoned to the arena as a teen, Raiden Tiago has long ago earned his freedom. Now he rules the arena, but he doesn’t fight for the glory, but instead for his own dark purpose—revenge against the Thraxian aliens who destroyed his planet. Then his existence is rocked by one small, fierce female fighter from an unknown planet called Earth.

Harper is determined to find a way home, but when she spots her best friend in the arena—a slave of the evil Thraxian aliens—she’ll do anything to save her friend…even join forces with the tough, alpha male who sets her body on fire. But as Harper and Raiden step foot onto the blood-soaked sands of the arena, Harper worries that Raiden has his own dangerous agenda…

This one is purely for fun. There’s no great message here, and I’m not too sure about any overarching story, like Hell Squad or Phoenix Adventures. This is just plain fun.

It’s also a good take on the infamous “Mars needs Women” trope in science fiction romance, A trope I don’t normally like, but is done well in this case. Because it isn’t Mars as a whole (so to speak) that needs Earth women, just three intergalactic gladiators in particular.

It has to get started somewhere. The somewhere in this case is Space Marine Harper Adams, stationed on a scientific research station orbiting Jupiter. Disaster strikes in the form of interplanetary slave raiders, the Thraxians, who look like the Terran equivalent of demons and break into the station and kidnap several of the scientists and marines stationed there, including Harper.

But unlike many of the captives, Harper is a trained warrior. Whenever she has the opportunity, she fights back. It earns her several beatings, and the undying enmity of one of the leaders, but also keeps her in fighting shape. A preparation she needs when she is sold on an outer Rim planet as a potential gladiator for the Kor Magna Arena on Carthago..

And that’s where everything changes. Harper is a good fighter to begin with, but she’s also deceptively strong. She’s smaller and shorter than most of the gladiators in the arena, but she’s also faster. It turns out that Earth has a slightly heavier gravity than Carthago, so she gets an unexpected strength boost.

It takes her a few days to find out both the good news, the bad news, and the dangerous news.

The bad news comes first. The Thraxians found Earth by accident, through a temporary wormhole. Earth is on the far side of the galaxy. Even if she stole a ship, it would take 200 plus years to get home. It’s a blow, but not as big as it might have been. Harper has nothing and no one left on Earth. She can make a home on Carthago if she can manage to accept her new circumstances.

Those new circumstances are nothing like she expected. She’s been enslaved, and she sees the gladiators in the arena as slaves, and thinks the gladiatorial contests are like the popular perception of the Roman Empire. That might be true in some of the other houses, but not in the House of Galen, the House that bought Harper’s “contract”.

Once she fights her way through her trial bout, Harper discovers the good news, for certain select definitions of good. She learns that the House of Galen, for all of its deserved badass reputation on the arena sands, has a surprisingly soft heart. All the gladiators are free, and they all fight because they can, and because the fights that they win allow them to bargain for the freedom of those who have been brought to Carthago from far-distant worlds but who are not suitable for the arena.

There is also the dangerous news. Fighting in the arena, fighting with the team that belongs to the House of Galen, Harper finds a place where she belongs, a purpose she can believe in and a man that she has come to love.

And it all threatens to go pear-shaped when the Thraxians dangle the presence of two of her friends from that Earth space station in front of her eyes. She’ll do anything to rescue her friends from Earth, no matter what the cost to herself, to the House of Galen, or to any future she might possibly have with the love of her very surprising life.

Escape Rating B+: For a story that is this much fun, there is a lot going on. While for this reader it feels like the focus is on Harper, because she is the one who has to make the big adjustment, there is definitely a romance here.

Raiden is the lost prince of a world that the Thraxians literally destroyed. They didn’t just wipe out the civilization, they placed bombs in the planet’s core so that it would break apart. Just like Harper, Raiden can’t go home again. He’s made a life for himself as a gladiator, fighting to free as many people as possible, one way or another.

Harper makes him feel, which is both dangerous and life-affirming, especially when they both have a nasty tendency to go off alone in dangerous situations to solve their problems.

I would love to know how things got to be the way they are in this place. Also more about the Thraxians. They have a bit more “evil for evil’s sake” in them than I would like. In other words, Hell Squad got much better for me when we learned the Gizzida’s motives. I may not like their motives, but understanding them helps me enjoy the series a whole lot more. We need to see that here on Carthago.

The whole “alternate gladiator” thing reminded me of another book, which of course I had to look for. If you like this kind of scenario, but want something darker and grimmer, you might like Lindsey Piper’s Dragon Kings series, starting with Silent Warrior. The way that the gladiator contests work has a similar feel, even if Dragon Kings is set on Earth. 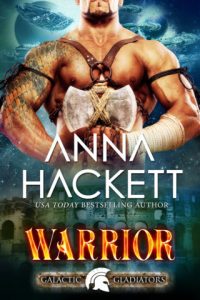 I enjoyed Gladiator a lot, and I’m looking forward to the next book in the series, Warrior. It looks like each book will match one of the gladiators of the House of Galen with one of the Earth women who was brought to Carthago. And it looks like a whole lot of sexy, sweaty fun!

Reviewer’s note: I don’t often see the name Galen used in fiction. My husband’s name is Galen, so I got a big kick out of thinking of him in the role of the leader of these gladiators! 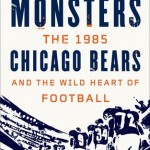 Review: Monsters: The 1985 Chicago Bears and the Wild Heart of Football by Rich Cohen

Review: The Winemaker Detective Mysteries: An Omnibus by Jean-Pierre Alaux and Noel Balen
SEAL of My Dreams