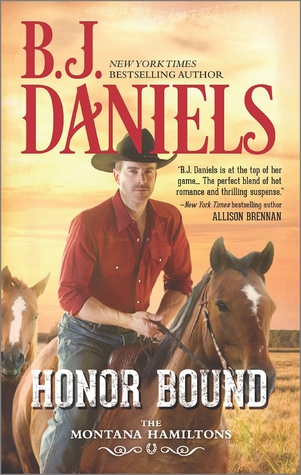 Protecting her life will mean betraying her trust

Ainsley Hamilton has always been the responsible one of the family. As the oldest daughter of presidential candidate Buckmaster Hamilton, she's also a potential target. For months she's sensed someone following her. When an expedition to scout locations for a commercial takes a terrifying turn, she's rescued by a natural-born cowboy who tempts the good girl to finally let loose.
Sawyer Nash knows just how reckless it is to fall for someone he's gone undercover to protect. Yet masquerading as an extra on set, he starts to see beneath Ainsley's controlled facade. And with the election—and a killer—drawing closer, Sawyer stands to lose not just his job and his life but the woman for whom he'd gladly risk both. 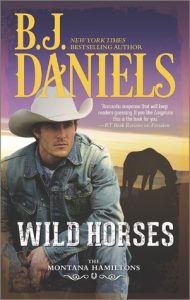 Honor Bound is the sixth book in the author’s Montana Hamiltons series. As someone who has not read the rest of the series and got totally lost in this book, I highly recommend that if you think this book sounds interesting, or if someone recommends it to you, and you haven’t read the rest of the series, start at the beginning with Wild Horses, or don’t start at all.

All the loose plot threads from all of the previous books get wrapped up in a bow in this one, and some of those plot threads are absolute doozies. For faithful readers of the series, this book serves as the perfect ending for all of what came before, but for readers just starting, like me, it comes off as too many subplots and too much stuff going on to be packed into one book.

I felt like the long arm of coincidence (or as we call it around here, co-in-key-dink) got much, much too long. Too many crazy things happen all at once, and it pulls at the willing suspension of disbelief. Of course, for those following the series, all of those converging subplots are cathartic, as everything gets wrapped up and tied off.

Considering that I read this as we were gearing up for the final presidential debate this season, having the book start out with a Republican being elected President by a landslide was more than a bit bizarre on a number of levels. However, Buckmaster Hamilton is a way different brand of Republican than the current candidate.

The series overall has followed his candidacy, as well as providing an HEA for each of his six daughters in turn. Honor Bound is oldest daughter Ainsley’s chance for her HEA. FBI Agent Sawyer Nash arrives at the remote Montana valley where Ainsley is scouting locations for an advertising campaign to investigate her reports of a stalker. Unfortunately for both Ainsley and Sawyer, her stalker ramps up his interference after seeing the relationship between Ainsley and Sawyer heat up.

There are multiple coincidences, or so it feels, in Ainsley’s situation. One of Sawyer’s ex-lovers is also undercover at the location shoot, but Kitzie is investigating a ring of jewel thieves who seem to be operating within the production company. Kitzie is jealous of Sawyer’s interest in Ainsley, and steps way, way, way outside the lines of professionalism in an attempt to sabotage their developing relationship. And in spite of every terrible thing that Kitzie does, in the end she is still one of the “good guys”, for select definitions of both “good” and more obviously “guys”.

The overarching plot that has driven this series, as a counterpoint to Buck Hamilton’s election campaign, is the story of his wife Sarah. As the series began, Sarah, who had been missing and presumed dead for 22 years, returns with no memory of the intervening years. No one seems to trust her and her motives – with good reason.

Sarah led a double-life. Not only did she marry Buck Hamilton and have six children with him, but she was also a notorious terrorist code-named “Red”, at least in college and possibly later. “Red” may have been the true leader of The Prophecy, a terrorist group with ambitions to take out as much of the U.S. government as possible. Sarah doesn’t remember it all. But her ex-lover, and the current leader of the group, Joe Landon, is stalking Sarah and threatening her family if she doesn’t cooperate. And there’s a very, very shady doctor in the background who claims to be the person who removed Sarah’s memories, and who also claims to be able to put them back.

That’s a whole lot of plot for one book. Without the previous background, the separate and unrelated stalkings of Sarah and Ainsley strain credulity. Not having read the previous books put this reader at an extreme disadvantage.

But for those who have been through the whole saga, this feels like just the wrap up they’ve been looking for.

Escape Rating C: In the end, I came to the conclusion that this just wasn’t my cup of tea, which explains why I haven’t read the rest of the series.

It felt like too many long-shot coincidences, and too many subplots and too many perspectives for a single book. Knowing that this is the end of a series makes those things make sense, but it doesn’t work for someone who is not in on all the action.

When it comes to the central love story in Honor Bound, Ainsley and Sawyer’s relationship comes off as a very serious case of insta-love. Not that that doesn’t happen in real life, but they needed a bit more time together for this reader to buy into their romance.

And I’ll admit to a personal pet peeve about 34-year-old virgins. It just didn’t seem realistic, and it made it difficult for me to identify with Ainsley. It made her feel like a throwback to the old days of formula romances, when the heroines were always virgins and the heroes were always experienced. And dominant. As I said, that is very much a personal pet peeve, and your mileage may vary.

To recap from the very beginning of this review – if you are a faithful follower of the series, you will probably want to run and not walk to get to this concluding story. If you are a newbie, this is not the place to start.

B.J. and Harlequin are giving away a $25 Gift Card to one lucky entrant on this tour. 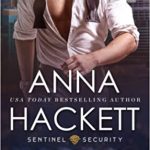 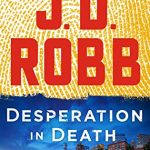