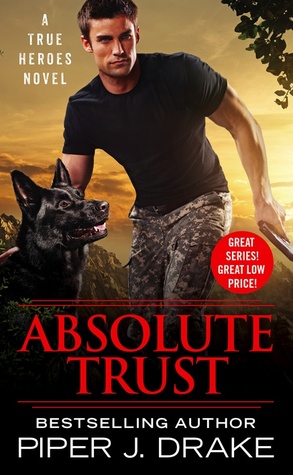 LOVE IS THE GREATEST RISK OF ALLAfter multiple tours of duty, Brandon Forte returns to his hometown on a personal mission: to open a facility for military service dogs like Haydn, a German shepherd who's seen his share of combat and loss. It also brings him back to Sophie Kim, a beacon of light in his life . . . and the one woman he can't have. But Forte's success means he's made enemies in high places. Enemies who are now after Sophie . . .
When Forte enlisted and left without saying goodbye, Sophie did her best to move on. But with her first love back in town, looking sexier than ever, she's constantly reminded of what they could have had. Then after he risks himself for her, Sophie realizes she'll have to put her life in the hands of the man who broke her heart, knowing the danger -and the sparks between them- could consume them both.

This was a case of the right book at the right time for me. I really needed a straightforward romance suspense, and with its terrific combination of hot romance and nail-biting tension, Absolute Trust completely filled that need.

With a tiny bit of quibble at the very end. We’ll get there.

The story is all about Sophie and Brandon (and Haydn and Tessa) and getting out of the “friend zone” and moving towards the future. If everyone survives, that is.

Brandon and Sophie were friends in high school. And they are friends now. In the middle, there was a giant rough spot that Brandon wants to paper over and Sophie needs to just get over. But first she has to know what happened way back then.

Sophie has always loved Brandon. And seemingly vice-versa. But Brandon never believed he was good enough for Sophie, and her father certainly agreed with that assessment. So instead of sticking around and pursuing a relationship, Brandon joined the military the night of their high school prom.

Sophie never even got to say goodbye. And she never got over him. She also never managed to get past that her first lover dumped her without a word, turning all the dreams they shared that one night into dust. Brandon may have bravely run into the fight, but he also rather cowardly ran away from Sophie.

Brandon comes home after his deployments, and opens Hope’s Crossing Kennels. And Sophie steps up to be his friend, because that’s all she believes they can ever have. And she believes it’s worth staying in the “friend zone” just to keep Brandon in her life.

Until someone plants a bomb under her car, and she barely escapes certain death through sheer luck. Brandon just happened to be out walking Haydn, a new “recruit” at the Kennels. The big German Shepherd dog has a prosthetic leg, and a nose for sniffing out explosives. It’s Haydn’s alert that saves all their lives.

And plunges Sophie’s entire world into chaos, leaving her with her life in tatters and only Brandon to hang onto. Hiding from Sophie’s would-be killers, on the run for their lives, Brandon and Sophie finally manage to open all the cans of worms they’ve been stepping around for years.

Escape Rating B: I picked up Absolute Trust after I discovered that Piper J. Drake is also PJ Schnyder. I loved her science fiction romance series, both London Undead and The Triton Experiment, so I was thrilled to see that she was still writing in a different space.

From her SFR, I knew she was good at mixing romance with suspense. The worlds of both series are not exactly safe or sane. And that she was good at throwing her hero and heroine together in the midst of life-threatening danger.

So it proves in Absolute Trust. Whatever they were before, the relationship between Brandon and Sophie in this story has to survive a crucible of fire, as do they. And whatever baggage they have hanging around, and it’s a ton. They also have to figure out if they have a chance as the people they are now. Brandon in particular has been tried by fire, under fire, and the compartmentalization necessary to be a military operative is still very much a part of him. He is scared, and rightfully so, that the deadly side of his nature might frighten Sophie away.

But because he has managed to paper over all the issues that made him leave Sophie the first time, he has difficulty understanding that the biggest problems between them aren’t in the present, but in the past. He left her once without a word. How can she ever trust that he won’t do it again? 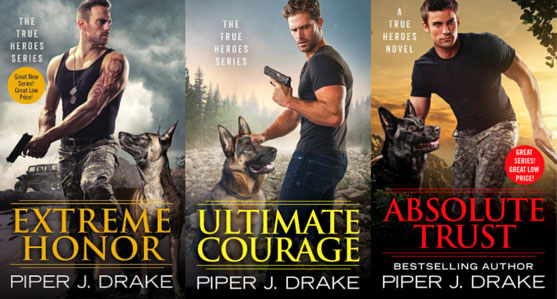 Absolute Trust is the third book in the author’s True Heroes series. Although this is the first book in the series that I have read, I did not feel lost at all. The previous heroes and heroines appear just enough to provide a sense of continuity and the feel of a working community, without being so much a part of the story that the reader needs more than the background provided. This story isn’t about the past of the group, it’s about the past between Brandon and Sophie, and that’s all here.

I also liked Brandon and Sophie as the hero and heroine quite a bit. Absolute Trust is a twist on the friends-into-lovers trope, and its done well. The very real dilemma of whether it is worth risking their solid friendship to grab for more is handled well on both sides. As is Sophie’s intense realization that she has been taking the easy, non-conflict path her entire life, instead of doing the hard work of sticking up for what she truly wants. I loved the way she figured out that she needed to make some serious changes, whether or not Brandon remained a part of her life.

Something I particularly enjoyed about this story is that the danger to Sophie was caused by her work. She didn’t have a stalker or a vicious ex. She wasn’t a victim in need of a rescue. Her difficulties were the result of her own actions rather than her inactions, in spite of the fact that her epiphany about her life did have to do with taking a too easy path. There are too many suspense stories where men become endangered because they did something, where women become endangered merely because they are women. I liked this trip to the danger zone much better.

The one issue I had with Absolute Trust is that it didn’t quite stick the dismount. The story is completely absorbing from beginning to end, but it doesn’t seem to end with complete resolution. Sophie and Brandon are still trying to work things out. They need a bit more time for the ending to feel like an HEA. At the same time the bad guys that they are fighting against don’t seem unequivocally gone. Probably gone, but not quite certain. If there is a fourth book in the series I hope that some of these issues get resolved.

Haydn and Tessa were the secondary stars of this show, and provided heroism and comic relief at the appropriate moments. As a tiny feline, Tessa seems to just embody “cat”. Brandon’s description of her pointedly washing ALL her bits right in front of him as the equivalent of a cat giving him the finger was perfectly hilarious. Also perfectly true.

Piper and Forever Romance are giving away 10 copies of Absolute Trust to lucky winners on this tour.