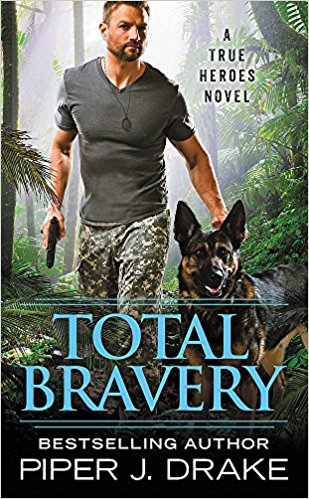 True heroes will do anything to protect the women they love...

As the newest recruit at Search and Protect, Raul has a lot to prove. Luckily, he's got the best friend and partner a man could ask for: a highly trained, fiercely loyal German Shepherd Dog named Taz. Together, Raul and Taz make an unbeatable team. But their first mission in Hawaii really puts them to the test when an international kidnapping ring sets its sights on the bravest woman Raul's ever met . . .

Mali knows her latest job has put one hell of a target on her back. And on this small island paradise, there's nowhere to hide. With a service dog like Taz, Mali feels safe. Sharing close quarters with a smoldering muscle-for-hire like Raul, she feels something else - an unexpected wave of desire. Raul feels it too. But when the kidnappers make their move, he's got to turn that slow-burning passion into hard-hitting action - and save the life of the woman he loves. 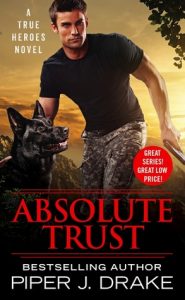 Although I read the previous book in this series, Absolute Trust, this book does not feel like it followed from that one. At all.

That doesn’t mean that I didn’t have a good time with the people and dogs of Total Bravery, but it does mean that if you want to get into this series and haven’t read the previous books – no problem at all. They are equally good (more on that later) but don’t seem to connect up.

There is one way in which Total Bravery is very much like the previous book in this series. In both cases, while the heroine is in jeopardy and needs the hero’s help to stay safe and alive, said heroine is not the victim of a stalker, or a evil ex (evilex™) or any man with a sexual agenda directed at her. Nor were either of them in danger merely because they are women.

In both cases, the suspense part of the plot revolves around what the heroine does, specifically what she does for a living. It’s her agency that gets her into trouble, and it’s her agency that helps get her out. Nor in either case is the heroine TSTL (that’s Too Stupid To Live) so that she puts herself in unnecessary trouble.

Mali in particular is smart and savvy and knows just what to do when her research partners are suddenly swept off the streets of Hawaii by overheated men in tailored suits. No one wears dark suits in Paradise – unless they are up to something no good and are willing to advertise that fact.

While Mali follows the safety protocols set up by her research team, but she also has an ace in the hole – her sister Arin is part of Search and Protect, a private security and investigation firm that does just what the name implies – and is located in Hawaii.

So Mali doesn’t just hide out – she calls for help from people she knows can definitely help her. In fact, they are experts at it. But with her sister Arin off the island, Mali’s rescue falls to the company’s newest recruits, Raul Sai and his German Shepherd Dog Taz. Once Raul and Taz meet Mali, the three of them form an almost instant team – even in the face of big sister Arin’s confused disapproval.

Arin still sees Mali as the little girl she once protected from bullies, while Mali still sees Arin as the scary big sister who took care of her by displaying her dark side to anyone who threatened little Mali.

Mali may still be a lot smaller than her big sis – but she’s a grown up now with a job that takes her into places as dark and dangerous in their own way as her sister’s military service. Mali and her team are researching human trafficking on the streets of Hawaii, and they’ve gotten into someone’s way.

It’s up to Search and Protect to find her missing team and rescue them, and protect Mali from bad people who want to kill or kidnap her, without trying to shove her into a tight little box the way that her sister wants.

And while Raul and Mali do their best to alternately ignore and explore the explosive chemistry between them – before they have to go their separate ways.

Escape Rating B+: I really, really like the fact that Mali never loses her agency in this story. It’s refreshing, because so often in romantic suspense the heroine gives up her ability to act for herself in order to get rescued, and Mali never does.

I also loved the way that Raul and Taz, along with the other teams in Search and Protect, are so obviously a team. It is a joy to read the way that the two of them work together and are growing towards each other in a true partnership – and that both of them, in obviously different ways, see Mali as a part of their “pack”. Taz is possibly even more protective of Mali than Raul is, but then again, Taz has considerably less emotional baggage to deal with.

In spite of the obvious physical differences, one of the things that is emphasized in this romance is that Raul and Mali, if they pursue a relationship, can hurt each other. All too often it’s all about the woman getting hurt, and about her giving up essential pieces of herself to stay with the man. That doesn’t happen here.

And it’s both that Mali will have to deal with Raul’s focused and deadly military side, as well as the things he has to do and the acts that he has committed to stay alive, and that Raul will have to deal with the fact that Mali will put herself in danger for her work. It’s also that they live as far apart in the U.S. as possible (Boston vs. Hawaii) and that they will have to compromise to be together, but without giving up anything essential to either of them. The author makes it work.

Another thing that worked for me in this story is that Raul never minimizes or discounts anything that Mali says. Not only does that happen too often in fiction, it happens entirely too damn often in real life, where women’s words, intelligence, warnings and gut instincts are ignored or discounted because they are women. He takes her seriously every step of the way, and by example makes sure that the rest of the team does too.

The romance in this story takes a bit of a back burner to finding and rescuing Mali’s teammates, and that’s as it should be. That both sides of the story do resolve happily is what made this one so much fun.

As much as I am a cat person in real life, I love this trend of smart, protective dogs as characters in military romance and romantic suspense. Bring on the puppies!