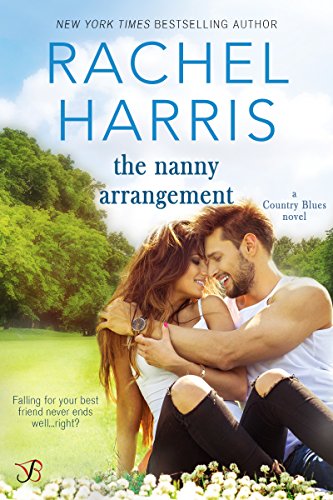 Soft-spoken and shy Hannah Fisher is determined to make the man she’s loved her entire life finally see her as a woman. With the help of a makeover, a new mission—Operation Find My Happy—and the convenient forced proximity of a tour bus, she vows to win her best friend Deacon’s heart.

Former bad boy and current fiddle player Deacon Latrell has the world at his fingertips: a new gig with a famous band, plus his best friend on tour as his son’s nanny. Life couldn’t get much sweeter. Now if only he could stop imagining kissing the daylights out of his childhood BFF...

With one friend set on pushing the boundaries and the other afraid to rock the boat, one thing’s for certain—their story would make one heck of a country song.

I was surprised at how much I enjoyed The Nanny Arrangement. As much as I love the friends-to-lovers trope, there are a whole lot of other factors in this story that generally drive me crazy, and certainly did this time. And I liked the damn thing anyway!

The Nanny Arrangement is right on the cusp between New Adult and Contemporary Romance. The protagonists are both 20-somethings, and are still figuring out what they want out of life. They also fumble quite a bit along their way.

This is really Hannah’s story. She has come back from a year-long stay in Paris as an au pair to initiate Operation Find My Happy. It’s not that Hannah doesn’t know where her happy is, it’s that she isn’t sure she can manage to grab it. Because Hannah has been in love with Deacon Lattrell for ten years now, and he doesn’t seem to see her as anything more than a friend. Admittedly his best friend in the whole universe, but still, firmly and seemingly irrevocably, stuck in the dreaded friend zone.

But as much as Hannah loves being Deke’s friend, as well as the surrogate mother to his young son Max, Hannah just plain loves Deke, and always has. But Hannah has always hidden herself away in baggy clothes and in the fringes of any group, and it is possible that Deke simply hasn’t seen her as she really is. And that he never got past spending high school defending Hannah from all the schoolyard cruelty inflicted on her as a red-headed girl with a stutter who wore slightly old-fashioned clothes. She was the class freak, and Deke was her lone defender.

There’s plenty of love there, but it isn’t exactly the kind of love that Hannah wants or needs. Running away to Paris didn’t cure her of her embarrassingly unrequited love for Deke, so putting herself out there and making him see her may not work either, but she has to try before she has a chance at moving on.

That’s where the fun begins. Deke is the latest member of the country rock group Blue. The band has been established for years, but they needed a new fiddle-player and Deke has turned out to be it. But Deke doesn’t travel without little Max, and that’s where Hannah steps in. The band needs a live-in nanny on tour, not just for Max but also for the lead singer’s little girl Stella. So just as Deke is on a trial contract as their fiddler for the length of their US tour, Hannah is on a trial contract as their nanny.

In the enforced intimacy of a small group on tour in not-nearly-big-enough buses, Hannah has the chance to open Deke’s eyes. It’s not her fault that as soon as he opens them, the idiot slams them shut again. He wants only the absolute best for Hannah, and he’s sure that’s not him. Not that he’s actually asked her what she wants. Of course not.

He’s an idiot, but while plumbing the vast depths of his idiocy he finally gets smart enough to put on some really excellent grovel to get back the girl he’s always loved.

Escape Rating B+: Throw the tropes New Adult Romance, Rock Star Romance, Friends-to-Lovers, I’m Not Worthy, and Misunderstandammit into a blender, mix with Operation Find My Happy, and come up with a story that in spite of its flaws still makes the reader finish with a big smile.

I say this because I find that I’m hit or miss with New Adult, and very much down on both I’m Not Worthy and the Misunderstandammit. Combining the trope where the hero kicks the heroine to the curb because he’s certain she’s too good for him, and mixing it with the trope where so many of their issues could be solved if they just talked with each other instead of past each other once in awhile does not make for this reader’s favorite frustration.

What redeemed a whole lot of these two issues was that, unusual for romance, Deke put on very good grovel to make up for his errors. Not that Hannah wasn’t going to take him back anyway, but not just Deke but all the guys in the story were conscious that Deke had screwed up big time and needed to make up for it even bigger time.

It was great not to see the guy get a hall pass on this.

But it was Hannah’s Operation Find My Happy that made the story for me. She’s not sure how to get what she wants, and she’s certainly not sure that she’ll get what she wants, but she has internalized the mantra about only getting a different result by taking a different action. Along with the realization that the whole unrequited longing thing just wasn’t working for her. She needed to get on or get over, and she hadn’t found a way to get over so it was time to get on with pursuing what she wanted, even if she lost.

And we do see where Deke and Hannah came from, and just how and why they ended up in the pickle that they are in. And we’re thrilled when Hannah’s courage and Deke’s excellent grovel finally locate Hannah’s (and Deke’s and Max’s) happy.