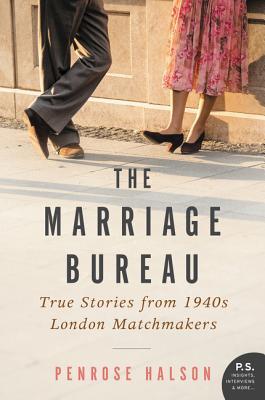 A riveting glimpse of life and love during and after World War II—a heart-warming, touching, and thoroughly absorbing true story of a world gone by.
In the spring of 1939, with the Second World War looming, two determined twenty-four-year-olds, Heather Jenner and Mary Oliver, decided to open a marriage bureau. They found a tiny office on London’s Bond Street and set about the delicate business of matchmaking. Drawing on the bureau’s extensive archives, Penrose Halson—who many years later found herself the proprietor of the bureau—tells their story, and those of their clients.
From shop girls to debutantes; widowers to war veterans, clients came in search of security, social acceptance, or simply love. And thanks to the meticulous organization and astute intuition of the Bureau’s matchmakers, most found what they were looking for.
Penrose Halson draws from newspaper and magazine articles, advertisements, and interviews with the proprietors themselves to bring the romance and heartbreak of matchmaking during wartime to vivid, often hilarious, life in this unforgettable story of a most unusual business.

Fiction may be the lie that tells the truth, but sometimes that truism runs headlong into another, the one that goes, “The truth is not only stranger than we imagine, it’s stranger than we CAN imagine.” Fiction has to actually feel plausible, or it turns the willing suspension of disbelief into the unwilling, and bounces the reader out of the story. Nonfiction doesn’t have to be plausible, it just has to be true.

The history of The Marriage Bureau is one of those stories that would feel a bit too contrived if it were fiction. But it isn’t. Fictional, that is. It still feels a bit contrived, but because it actually did happen, the reader ends up marveling at human nature in all its sometimes crazy variety (much as the proprietors did) instead of picking apart the characters.

Because if these folks weren’t real, we’d all be sure it was a bit too good or too strange to be true. Mostly strange.

In 1939, both Heather Jenner and Mary Oliver had dipped their toes into the marital well, and come out either scalded or completely tepid. Heather was divorced and Mary hadn’t found anyone she wanted to spend the rest of her life with. Or even more than few weeks with.

It was Mary’s Uncle George who suggested the idea that became the Marriage Bureau. Providing a registry for people who were looking for spouses, and using interviews, common sense and intuition to match people up, had the possibility of providing both young women with both an independent income and a purpose in life, allowing them to remain single and independent of their families while providing a much needed service.

A service that was much more needed than either of them anticipated. From their very first day the line for interviews went down the stairs from their rented office and practically out the door of the building, three stories below.

The story in The Marriage Bureau is that of the first ten years of the Bureau, a period that encompasses the end of Empire, the Phoney War, the London Blitz and the years of post-war rationing. Through it all, Londoners and many others crossed the threshold of the Marriage Bureau, hoping that the ladies of the Bureau could do for them what they had not managed to do for themselves, find a congenial and suitable spouse.

One of the fascinating things about the way that the Bureau worked was that, unlike many British institutions, particularly of that era, it was not restricted to class. The fees were modest, and structured so that it was in the agency’s best interest to find each client a spouse who would suit them, not anyone else’s ideas for them.

Yes, most people were looking for someone of their own class, or close to it, but the Bureau had clients of every class and station from working to landed to titled and all the gradations in between. Just as today, those who are too busy making a living or caring for others or a combination of the above are often too busy, too shy or both to put themselves out where they have a chance at finding a life-partner.

And for the women who ran the Bureau over that decade (and beyond) it was a labor of love. And a rousing success.

Reality Rating B: The story in The Marriage Bureau is episodic rather than a continual narrative. The story dips into the lives, loves and ambitions of the people who came the Bureau as clients, rather than delving deeply into the lives of its proprietors and agents. Although the years of the London Blitz are part of the story, we read more of the Blitz’s impact on people’s lives and their desire to marry than we follow any one person’s story.

Being a series of dips rather than a deep dive, the story is not a compelling read. One isn’t riveted, wanting to see what happens next, because the narrative doesn’t follow individuals in the way that compels. However, and it is a very big however in this case, it is both easy to dip into and out of, and the story as a whole is quite charming. Even the more “interesting” and less matchable clients get their due. And while there is a certain amount of shared laughter at some clients’ wilder expectations, every client and their story are treated with respect, sometimes including a direct “talking to” about just how wild their expectations might be. And sometimes they are very wild, whether for self-aggrandizement, out of self-absorption, or, on occasion, out of sympathy and hope.

It isn’t all sweetness and light. There are a few stories where the clients tipped over (or barged over) the line, and got shown the door. There is one haunting story of parental interference in what should have been a happily ever after. And, of course, life happens. The war brings an end to some marriages, and the peace brings an end to a few more. Some merely grieve, but some return in the hopes of striking lucky a second time.

In the end, this is a story of two women and the execution of one great idea. And it’s a story that shows that there is someone out there for everyone, even if we occasionally need a little help with the looking.

2 thoughts on “Review: The Marriage Bureau by Penrose Halson”