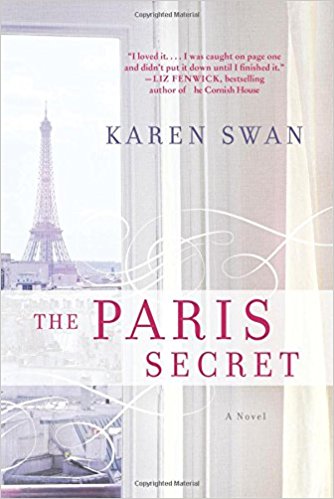 Somewhere along the cobbled streets of Paris, an apartment lies thick with dust and secrets: full of priceless artworks hidden away for decades.

High-flying Fine Art Agent Flora from London, more comfortable with the tension of a million-pound auction than a cosy candlelit dinner for two, is called in to asses these suddenly discovered treasures. As an expert in her field, she must trace the history of each painting and just who has concealed them for so long.

Thrown in amongst the glamorous Vermeil family as they move between Paris and Antibes, Flora begins to discover that things aren't all that they seem, while back at home her own family is recoiling from a seismic shock. The terse and brooding Xavier Vermeil seems intent on forcing Flora out of his family's affairs - but just what is he hiding?

But in spite of the similarity of their origins, the stories are completely different. And also a bit the same, but not so much the same that The Paris Secret does not stand on its own – because it does.

In this version, the “lost” apartment belongs to the wealthy and philanthropic Vermeil family, and they are as surprised as anyone else when their lawyer informs them that someone has broken into this apartment that they never knew they owned. It’s even more surprising that the apartment turns out to be a virtual treasure-trove of modernist art, including paintings and sketches by Renoir, Picasso and others. These art treasures have not seen the light of day since the apartment was closed up during the dark days of the Nazis occupation of Paris during WW2.

Our heroine, Flora Sykes, is the art history expert who is tasked with cataloging the vast collection and researching its provenance for the Vermeil family. But her involvement with the family gets off to a rocky start, and stays rocky throughout the book. Sometimes because of the family, but mostly because of what Flora discovers about them.

Their present is gossip-worthy enough on its own. The two adult children of the family, Xavier and Natascha. They are at the top of every gossip site – their exploits and tantrums are legendary. And something about Flora seems to rub both of them absolutely the wrong way, to the point where they both act out every time they are around her.

But it’s the past of the family that Flora uncovers, and that is where history comes in. In order to sell the treasure trove, or even to donate it to museums, Flora must determine its provenance, in other words just how all those paintings came to be in that apartment in the first place.

That search takes her back to the war, and unearths a terrible secret that everyone wishes had never come to light. But once it does, there is no going back. Only forwards. Because the whole truth has been buried under layer after layer of lies and deceits, and it is past time for everything to finally be revealed.

Not in black or white, but in terrible shades of gray.

Escape Rating B: It was fascinating to read a book that used the exact same premise as something I’d already read, and see where this author used the inspiration in an entirely different way.

Paris Time Capsule focused more on uncovering the history. The Paris Secret revolves around the art. History gets uncovered, but it uses the art as a focus in a way that made the two stories very different.

The Paris Secret also illuminates one of the murkier (and often nastier) facets of the Nazi occupation of Paris. The ownership of the paintings traces back to an art dealer who was reviled for his cooperation with the Nazis. He was instrumental in the forcing of many Jewish families to sell their precious collections at gunpoint for bargain-basement prices in the families’ belief that they were buying freedom for themselves – when all they received was betrayal while the dealer made a fortune.

The betrayal was even more heinous because the dealer himself was a Jew. If he hadn’t died in 1942, after the war he would certainly have been tried as a collaborateur and ultimately convicted.

But of course this is not the whole story, and the revelation of all the truths involved adds depth to the contemporary parts of the book. Not that there are not plenty of revelations there as well.

Because the more that Flora interacts with the family, the more she sees beneath the surface. The tragic events in Natascha’s own past have bearing both on her present and on the current real-life revelations of the sexual misconduct of prominent figures in the entertainment world today. That resonance is more profound than might even have been intended at the time this book was first published over a year ago in Britain.

Layered on top of the history and the present-day traumas there is a romance between Flora and the Vermeil’s adult son and all-around bad boy, Xavier Vermeil. For this reader, the romance fell just a bit flat, as did Flora’s own family drama. Your mileage, of course, may vary.

There is at least one other book that revolves around the discovery of the real-life apartment, appropriately titled A Paris Apartment by Michelle Gable. And it looks worth checking out too. The story of the lost apartment is just so fascinating that more interpretations seem irresistible!

3 thoughts on “Review: The Paris Secret by Karen Swan”