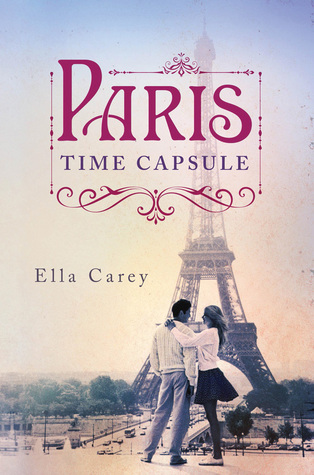 New York–based photographer Cat Jordan is ready to begin a new life with her successful, button-down boyfriend. But when she learns that she’s inherited the estate of a complete stranger—a woman named Isabelle de Florian—her life is turned upside down.

Cat arrives in Paris to find that she is now the owner of a perfectly preserved Belle Époque apartment in the ninth arrondissement, and that the Frenchwoman’s family knew nothing about this secret estate. Amid these strange developments, Cat is left with burning questions: Who was Isabelle de Florian? And why did she leave the inheritance to Cat instead of her own family?

As Cat travels France in search of answers, she feels her grasp on her New York life starting to slip. With long-buried secrets coming to light and an attraction to Isabelle de Florian’s grandson growing too intense to ignore, Cat will have to decide what to let go of, and what to claim as her own.

The premise of this story is fascinating and even more amazing because it is true.

Just as in the story, in 2010 the Paris apartment of Madame Marthe de Florian was discovered completely untouched since World War II. Marthe de Florian had been a famous, or infamous, courtesan during France’s Belle Epoque, a period of change that encompassed the final decades of the 19th century, including the period in America known as “the Gay Nineties”, and ended with a bang at the outbreak of World War I. Marthe de Florian was one of the queens of that tumultuous era, and entertained artists and especially statesmen who kept her in grand style.

But she died in 1939, and her apartment was inherited by her son and granddaughter. And that’s where things get interesting, because sometime during the war Marthe’s granddaughter closed up the apartment and left Paris. She never returned to her grandmother’s apartment, but kept it untouched until her death in 2010.

When the apartment was opened, it was discovered to be a treasure-trove of life in Paris during the Belle Epoque, including a undiscovered masterpiece by Giovanni Boldini, a painting of Marthe de Florian in her gorgeous prime.

The apartment was called the “Parisian Time Capsule” in many articles about its discovery and its secrets.

The author of the novel Paris Time Capsule has taken the story of the discovery and woven a fantastic tapestry of a story, as the young American woman who inherits the apartment from her grandmother’s best friend undertakes a journey to discover why this unlooked for legacy has come to her, and not gone to the descendants of the owner. As Cat Jordan follows the trail of clues to her grandmother’s past, she uncovers secrets that have remained hidden since the dark days of Paris’ occupation in World War II. And through her journey, she finally learns to listen to the secrets of her own heart.

Escape Rating B+: I had a love/hate relationships with this book. I absolutely adored the premise, and would have whether it was true or not.

In fiction, Cat’s free-spirited grandmother Virginia was the best friend of Isabelle de Florian, Marthe’s fictional granddaughter. But whatever happened in Paris between Isabelle and Virginia, Virginia never spoke about it after the war. Cat has no idea who Isabelle de Florian was, or why she left this dusty jewel-box of an apartment to Virginia’s descendants rather than her own.

Cat’s first surprise is her inheritance. Cat has always had a love of period designs and period clothing, and the apartment is an absolute treat for her. She just can’t understand how it came to her in the first place. Especially since the second person she meets on her Parisian trip is the grandson of Isabelle de Florian. Neither Loic Archer nor his mother Sylvie had any idea that the apartment existed, but they are more than willing to abide by their matriarch’s wishes and let Cat have it.

But they share with Cat a desire to understand what happened, and why Isabelle never told them of the apartment or its secrets, not in the long years when money was very tight and the sale of the apartment would have saved Isabelle and Sylvie from poverty. Something doesn’t make sense to any of them.

And this is where we get into the part that drove me absolutely bonkers. It is to be expected in a story that is set up as we have seen so far that Loic and Cat would fall in love as they search for Isabelle de Florian’s secrets. It is even not an unexpected part of this journey that Cat would discover that the life she has been leading in New York, including her brand-new fiance, would turn out not to be right for her after all.

But what drove me absolutely nuts was the way that this part of the story was handled. Or perhaps a better description would be the way that the character of Cat’s fiance Christian was portrayed. It is obvious from our first meeting with Christian that he isn’t the right person for Cat. Not because Loic is better (he hasn’t even entered the picture yet) or even because Christian and his family are extremely wealthy and Cat is scraping by in a job she hates.

No, the problem is that Christian takes every opportunity to subtly (and sometimes not so subtly) undermine Cat, her opinions, her decisions, her tastes and her ideas. He doesn’t want the Cat who actually exists, he wants a doll that he can dress up and parade around who will never challenge him because she is so grateful for his largesse. When he wants Cat’s attention, he tracks her down by GPS. When she wants his attention, he’s always busy working.

As the reader, I felt bludgeoned by just how wrong Christian is for Cat. It felt as if the author was trying to draw a parallel between the way that Christian treated Cat and the way that Marthe was kept by her gentlemen admirers. I started to feel a bit beaten about the head with the all-too-obviously drawn parallel, but it isn’t until well after Loic starts asking her questions that Cat’s self-talk finally begins to see the clue-by-four that I’ve been hit with from the first scene. It’s not just that denial isn’t just a river in Egypt, it’s that Cat doesn’t even see that she’s paddling upstream and losing ground with every stroke.

Outside of the appalling business of Cat’s horrid choice in fiance, the rest of the story is an absolute gem. I sincerely mean that. Cat’s journey, with all of its twists and turns and dead ends, is a voyage back to the dark days at the beginning of the war. When Cat finally discovers the truth about the apartment and its seemingly unusual disposition, it all makes sense. A very sad and heartbreaking sense.

We know that Cat is the rightful heir after all, and we’re glad for her and sad for the reasons why it had to be.

And thank goodness that Cat finally gets a clue about her own love life before it is too late.

I am giving away a paperback copy of Paris Time Capsule to one lucky U.S./Canadian commenter: