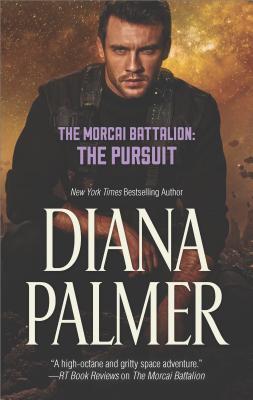 The first time Mekashe, Captain of the Imperial Guard, meets blue-eyed human beauty Jasmine Donally, the two nearly come to blows. Forever devoted to the Cehn-Tahr, Mekashe is forced to sever ties with the object of his adoration. Years pass before their paths cross again, but Mekashe hasn’t forgotten what transpired—or the way she makes his heart race. But even if he can forgive the past, insurmountable barriers still threaten to keep them worlds apart. With their mutual attraction escalating quickly, they’ll have to find a way to bridge the gap—or be lost to each other forever.

At first it seemed like this book had a vampire problem. Not literally, there are no vampires in this science fiction romance. (If you want vampires in space read Break Out by Nina Croft – it’s awesome) But The Pursuit still began with the same problem that most vampire romances have – what in the galaxy does a 250 year old male want with an 18 year old female? Beyond the obvious. But in order for this to result in a believable happy ever after, she has to be something really really special for this relationship to work. After all, what do they have in common? While her fresh perspective on pretty much everything may seem charming for a while, she will grow out of it. Will the person she grows into still fit into his already very much established life?

Just as I got frustrated with the corner that it seemed this book was painting itself into, it took a sharp turn and jumped completely out. And got a whole lot better as a result.

At first, the story in The Pursuit reads an awful lot like a old-fashioned Harlequin category romance moved into space. The hero is rich, powerful and much, much, MUCH older than the naive, innocent, sheltered, beautiful and virginal heroine. It’s only when the story breaks that pattern that things really take off.

Mekashe is the commander of the Imperial Guard on his home planet, a member of the mysterious and secretive race called Cehn-Tahr. He is also a member of the Royal Clan, but fairly far down the line of succession.

He is also 250 years old, but looks like he’s in his mid-30s at most. His race was genetically engineered and enhanced at a point far back in their history. While they appear mostly human in public, their real form is clearly derived from a giant and sentient cat species. By position, Mekashe is a high-ranking military officer. His would-be inamorata has problems with both.

His emperor (and great uncle) has insisted that he take some of the R&R he’s entitled to by traveling on a passenger liner from Terravega, now the human home planet, to Memcache, his home.

On that journey he meets the woman of his dreams. Quite literally. He has been dreaming of tall, slim, blonde Jasmine Dupont for years. She is the daughter of the first human ambassador to Memcache, and honestly, at the beginning of the book she’s the epitome of the TSTL heroine.

Not only is she basically a child at 18, she is self-absorbed and offensive at every turn, to the point where she commits a diplomatic faux pas so bad that it costs her father his job and eventually his life, as well as kills any hope for the budding relationship between herself and Mekashe. Her stupidity could literally have killed her, as the offense she committed usually carries the death penalty.

It’s only when things hit absolute bottom that Jasmine finally becomes the person she was meant to be – a person who might be able to stand beside Mekashe as an equal – if they ever find each other again.

Escape Rating B: The first part of this book is frustrating as hell. Jasmine may be 18, but she acts like a child at every turn. She is derisive of the military and she hates and fears cats. Poor Mekashe sees her as his fated mate, or at any rate his mate for life, but is rightfully worried that she will react badly when she discovers his true identity and form. And he’s right to worry. It’s a disaster.

But a disaster that she is still strangely shielded from. The Cehn-Tahr are so secretive that her father is not allowed to tell her the reason for his dismissal. She doesn’t know what she did and therefore can’t learn from it. Her parents have protected, indulged and cosseted her at every turn, and it has done neither her nor them any favors.

It’s only when she’s at the very real end of her rope that she really takes responsibility for herself and her own life, even if she still doesn’t know what it was she did wrong. She finally grows up. She also tells herself that she hates the Cehn-Tahr in general and their emperor in particular, but her feelings for Mekashe never die – no matter how much she wants to kill them.

Circumstances (with a little help from their friends) finally push Mekashe and Jasmine into each other’s orbit again. And while the HEA resolves awfully quickly and the problems are solved too easily (to the point of deus ex machina  or in this case, perhaps deus ex medica, easy), by the time it happens, Jasmine has grown into a person who is worthy of it. 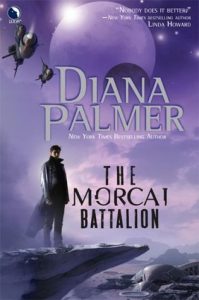 About that ending and all the people in it, as well as those who help along the way… This book probably makes no sense if you have not read the first and foundational book in the series, The Morcai Battalion. Which was surprisingly awesome military science fiction. While the main characters in that book are mostly secondary or tertiary characters in this one, the worldbuilding is all done in that first book. The romances that follow it, including this one, are the wrapping up of the loose ends created in that original scenario. So while I don’t think you need to read all of the intervening books to get to this one – that first one is essential. And highly recommended.

One thought on “Review: The Morcai Battalion: The Pursuit by Diana Palmer”