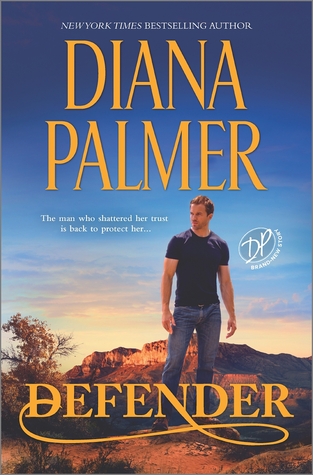 The man who shattered her trust is back to protect her… New York Times bestselling author Diana Palmer delivers a breathtaking story of second-chance love.
When Paul Fiore disappeared from Isabel Grayling's life, he told himself it was for all the right reasons. She was young and innocent, and he was her millionaire father's lowly employee. Three years on, Paul is the FBI agent assigned to Isabel's case. Too late, he realizes what life in her Texas mansion was really like back then—and how much damage he did when he left.
Once love-struck and sheltered, Isabel has become an assistant district attorney committed to serving the law, no matter how risky it gets. But right now, the man she can't forgive is the one thing standing between her and a deadly stalker. She knows Paul won't hesitate to protect her life with his own. But if she can't trust herself to resist him, how can she trust him not to break her heart all over again?

If you look on Goodreads, Defender is listed as a “read alike” for yesterday’s book, How Secrets Die. Having read both of them, while I liked them both, I have to say that they are absolutely nothing like each other.

I picked up Defender because Diana Palmer is one of those romance writers that I’ve heard about forever. And although I read her brief foray into science fiction romance, The Morcai Battalion (written as Susan Kyle) I had never read any of the western romance that she is much better known for.

And I haven’t yet. Defender does not have any of the feel that I have come to expect from contemporary Western romances. Instead, it had more of a melodrama feel to it. I felt like I was reading a soap opera, complete with the over-the-top plots, heroes, villains and ingenues that seem emblematic of the genre.

So even though Defender is listed as the latest book in Palmer’s Long, Tall Texans series on her website, and even though it is set in rural Texas not far from San Antonio, it doesn’t feel like a western at all. There are no cowboys here, and there’s no ranch anywhere in sight. There is a bit of thoroughbred breeding, but that could easily have been transferred to the Kentucky Bluegrass without many changes.

Except that it was pretty clear that the areas that surround the Grayling estate in Defender are part of a much longer series. There were a lot of side characters whose history was hinted at, and who had important parts to play in Defender, but the way they were introduced led this reader to conclude that the major part of these characters’ history was elsewhere, in earlier books in the series.

It bothered me a bit, but not enough to keep me from liking Defender.

The story in Defender is closer to romantic suspense than anything else, crossed with the romantic trope of innocent heroine falls for experienced, heroic, slightly-older man who protects her.

Isabel and Meredith Grayling are the protected daughters of investment tycoon Darwin Grayling, or so it appears to their father’s Head of Security Paul Fiore. But looks are deceiving, and there is a whole lot of evil hidden under the Grayling roof.

As Isabel is about to graduate college, and Merrie is graduating high school, we get to see exactly how dangerous and restrictive that “fatherly protection” really is. But even though Fiore can tell that both girls are afraid of their father, he never lets himself think about what that fear really means. But he leaves the Grayling house after he realizes that the love Isabel feels for him is not nearly as innocent as he wanted to believe, and that his response is going to get him fired, or possibly killed.

He returns three years later as part of an FBI investigation into Grayling’s business dealings, only to discover the damage that he did when he left, and the true circumstances in which he abandoned Isabel and Merrie.

Even as Isabel forgives him, he can’t manage to forgive himself. Not for the harm he caused, not for the harm he ignored, and not his responsibility for the tragedy that brought him to Texas in the first place.

Escape Rating B: Upon finishing Defender, I discovered that it reminded me a bit of J.R. Ward’s The Bourbon Kings, even though I hated The Bourbon Kings but liked Defender. Some of the similarity is in the atmosphere – both stories mostly take place on very, very rich people’s private property, and the evil behavior of the father figure in both stories is a bit over the top. However, for this reader it did not feel like BK had any truly redeemable characters, where in Defender there are quite a few people doing the best they can in an extremely bad situation, and one wants to root for them to succeed.

The Grayling household is a prison, a fact that Isabel and Merrie are reminded of entirely too often, and all too frequently with whippings and scars. Every person within their orbit has to be kept in the dark about their true situation, or Darwin Grayling will make them disappear – into an early grave. He’s done it before and is all too willing to do it again. The first third of the book is actually fairly rough going – the more one feels for the girls, and the reader certainly does, the more difficult it is to read about what they suffered.

Daddy Grayling is also batshit crazy, in so many ways that it seems like much too much. But he is also crazy rich and crazy powerful, to the point where he can buy and sell anyone or anything. At the end, when we discover what was driving his insanity, half of it is no surprise, but the other half was way out of left field and again, over the top. Reason number 1 was explanation enough without reason number 2.

And the involvement of “the Mob”, even tangentially, on both sides of this equation adds to that feeling of “over-the-top”-ness. There was plenty of evil to go around without dragging gangsters or their 21st century equivalents into this mess.

There’s something about Isabel and Merrie’s extreme naivete that hearkens back to romances of yesteryear. They are both educated and intelligent, and have been deliberately kept in the dark about the ways of the world. In many ways, their innocence and their indoctrination into staying innocent would put them right at home in a much earlier era. They know that what their father has done to them is wrong, but they don’t have a way of striking back until the Feds come to town to arrest their dear old Dad for money laundering and racketeering. Dad turns out to have been a much bigger all-purpose louse than anyone expected.

It is good for their development that Isabel, now a newly minted Assistant District Attorney, is able to contribute to the investigation. She needs to conquer the villain to have a chance at moving on with her life. That she actually gets the man of her dreams turns out to be icing on the cake – but very tasty frosting indeed.

Think of Defender as a guilty pleasure kind of book. Everything is just a bit too much, but lots of fun to wallow in – make that read.

Diana and Harlequin are giving away a $25 Gift Card to one lucky entrant: