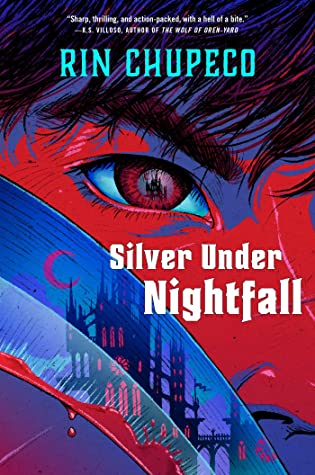 Full of court intrigue, queer romance, and terrifying monsters—this gothic epic fantasy will appeal to fans of Samantha Shannon’s The Priory of the Orange Tree and the adult animated series Castlevania.
Remy Pendergast is many things: the only son of the Duke of Valenbonne (though his father might wish otherwise), an elite bounty hunter of rogue vampires, and an outcast among his fellow Reapers. His mother was the subject of gossip even before she eloped with a vampire, giving rise to the rumors that Remy is half-vampire himself. Though the kingdom of Aluria barely tolerates him, Remy’s father has been shaping him into a weapon to fight for the kingdom at any cost.
When a terrifying new breed of vampire is sighted outside of the city, Remy prepares to investigate alone. But then he encounters the shockingly warmhearted vampire heiress Xiaodan Song and her infuriatingly arrogant fiancé, vampire lord Zidan Malekh, who may hold the key to defeating the creatures—though he knows associating with them won’t do his reputation any favors. When he’s offered a spot alongside them to find the truth about the mutating virus Rot that’s plaguing the kingdom, Remy faces a choice.
It’s one he’s certain he’ll regret.
But as the three face dangerous hardships during their journey, Remy develops fond and complicated feelings for the couple. He begins to question what he holds true about vampires, as well as the story behind his own family legacy. As the Rot continues to spread across the kingdom, Remy must decide where his loyalties lie: with his father and the kingdom he’s been trained all his life to defend or the vampires who might just be the death of him.

I wasn’t sure what I was getting myself into this book, and now that I’ve read it I’m still not entirely sure. Except that it was fantastic. Heart-pounding, fingernail-biting, stay up until 3 in the morning to finish fantastic.

But the question about whether this is fantasy or horror still feels a bit up in the air.

Remy Pendergast is a Reaper. In this world that means vampire hunter. But Remy only hunts so-called “rogue” vampires – ones who are causing mischief in human-controlled countries like Aluria. Vampires also have fiefdoms of their own where the rules are undoubtedly different.

Where Remy wouldn’t exactly be welcome because he’s famous for hunting their kind.

Not that Remy is exactly welcome in his own country, either. And not because he’s a Reaper. There are plenty of Reapers in high positions in Aluria’s government. In fact, his father used to be one of them.

But his father, who is a cantankerous old bastard at the best of times – of which he has damn few – is also in the midst of a lifelong feud with the head of the Reaper’s Guild – who also happens to be the Royal Chancellor. A man who is just as big a bastard as Remy’s father, and who is taking his feud out on the son now that the father has publicly retired.

And that’s just the tip of the really massive and ugly iceberg of why Remy is persona non grata in his own country – unless they need something killed and everyone else is too scared or too prissy to get their hands dirty.

That’s where the zombies come in. Well, not really and not exactly zombies. But sorta/kinda and close enough.

Someone is creating monsters that at first seem to be super-duper enhanced vampires. But they’re not. They’re mindless husks who regenerate at will and seem to be impossible to kill. Upon closer scientific study (this world is steampunk-ish so there’s plenty of mad science at least of the medical variety) it’s revealed that these mindless husks were never vampires – and that vampires are immune to the infection that creates them.

Lord Malekh and Lady Song, leaders of the Third and Fourth vampire Courts, have come to Aluria to ally with its Queen in order to combat what they call “The Rot” and whoever is behind that threat.

They need a human liaison. They both want Remy (in more ways than one) – who isn’t at all sure what he wants except to get out of Aluria for a while. The political temperature is getting way too hot for him and his father’s demands are becoming even more outrageous than they always have been.

And he’s tempted. Even though becoming a vampire’s familiar is against the law. Even though he’s fought vampires all his life. Even though a vampire killed his mother and he was born from her corpse.

Even though Malekh and Song are clearly in love and engaged to marry each other. Remy can’t understand why either of them wants him when no one else has ever wanted to do anything except use him for their own purposes.

He has a chance at having the kind of happiness that he never expected to even get a glimpse of. And he’s so, so certain that someone will take it away from him – unless he does it to himself first.

Escape Rating A+: Clearly, the setup for this is ginormous. It’s also endlessly fascinating. I got stuck into this and absolutely could not get out until I finished the last page at about 3 AM. It was just that good.

To the point where I’ll probably be squeeing uncontrollably more than reviewing per se. But I did love it so, so hard.

While the blurbs reference the anime series (and videogame) Castlevania, I think that’s because of the vampires, the politics and the monsters. I haven’t played or watched that so it’s not where my mind went. Instead, I kept seeing Remy as a younger, less confident Geralt of Rivia, in a world where hunting magical creatures gone rogue is needed while the people who do it are reviled. I would call it a bit of a coming-of-age story for The Witcher but I’m not sure Remy is fully adulting even by the end of the story – although he’s finally getting there.

Where I started with this review was that I still wasn’t sure whether the book was horror or fantasy. It was presented to me as horror and the scientific experimentation with zombie-like monsters who roam the countryside and infect others definitely has that vibe. There’s even a Doctor Frankenstein who is entirely too proud of his work even if he doesn’t use electricity to achieve his goals.

And then there’s the vampires, both the rogue vampires and the sexy vampire nobility. Which pushes the whole thing towards the paranormal which is an offshoot of horror.

But the form of the story reads like a big, sprawling epic fantasy. The world is huge and vastly complicated. The political agendas have political agendas and everyone is trying to knife everyone else in the back. The grudges seem to last for centuries – and not just among the vampires who have the excuse of living that long.

Basically, the politics behind everything are beyond Byzantine – as much as that is still an understatement if I ever heard one.

All of that makes the story feel epic in scope in a way that horror seldom is. And most of what is truly horrible in this story isn’t the monsters. It’s all the endless betrayals. It feels like the foundations of Remy’s world get pulled out from under him over and over as he keeps learning that under the corruption of everything if you scrape it away there’s yet another layer of, you guessed it, rot and corruption. Nothing he thinks he knows turns out to have any bearing on any truth.

That the triad relationship between Malekh, Song and Remy becomes both his only source of solace and a never-ending well of betrayal AT THE SAME TIME is just the icing on what is an utterly decadently delicious devil’s food cake of a story.

Whether it’s horror or fantasy or gothic or all of the above it’s riveting and downright compelling every step of the way. But whatever genre it falls into, I’m absolutely thrilled that the story isn’t over. Silver Under Nightfall is the first book in a projected duology, so there’s more dark, deadly and decadent delights to come!