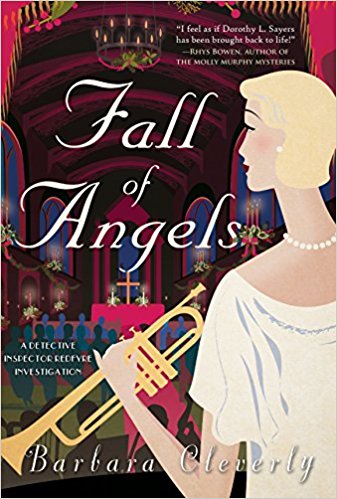 Great Britain, 1923: Detective Inspector John Redfyre is a godsend to the Cambridge CID. A handsome young veteran bred among the city’s educated elite, he is no stranger to the set running its esteemed colleges and universities—a society that previously seemed impenetrable to even those at the top of local law enforcement, especially with the force plagued by its own history of corruption.

When Redfyre is invited to attend the annual St. Barnabas College Christmas concert in his Aunt Henrietta’s stead, he is expecting a quiet evening, though perhaps a bit of matchmaking mischief on his aunt’s part. But he arrives to witness a minor scandal: Juno Proudfoot, the trumpeter of the headlining musical duo, is a woman, and a young one at that—practically unheard of in conservative academic circles. When she suffers a near-fatal fall after the close of the show, Redfyre must consider whether someone was trying to kill her. Has her musical talent, her beauty, or perhaps most importantly, her gender, provoked a dangerous criminal to act? Redfyre must both seek advice from and keep an eye on old friends to catch his man before more innocents fall victim.

I keep wanting the author’s name to be Beverly Cleverly, but it’s not. Fall of Angels, however, is a very clever little mystery, filled with interesting characters and tempting red herrings – and a few flaws.

I picked this book up because I was looking for something a bit less weighty than the rest of my books this week. But while it is a bit shorter, after finishing it I’m not so sure that it was actually lighter, at least not in the end.

It feels as if there are two books in one in Fall of Angels, one a rather lightweight between-the-wars mystery, and the other an exploration of the suffragist movement in England in the post-WWI era counterpointed by the rise of misogyny as backlash to that same movement – with a few other even darker things thrown into the not completely well-stirred soup.

This is the first book in a new mystery series featuring Detective Inspector John Redfyre of the Cambridge CID. That part of the story feels like an homage to the classic mysteries of the era, with the attitudes of the principals updated a bit to appeal to 21st century readers. Redfyre feels like a combination of Lord Peter Wimsey and the TV version of Jack Robinson from Miss Fisher’s Murder Mysteries.

Like Wimsey, Redfyre is from the upper-crust, although exactly how is not specified. So throw in a bit of Campion for spice on that score. Likewise, Redfyre is university educated, but Cambridge rather than Wimsey’s Oxford – although Campion was also a Cambridge man. Also like Wimsey, Redfyre served as an officer in the Great War, but seems to have come out relatively unscathed, at least in comparison with Wimsey’s horrific bouts of PTSD.

In his actions, Redfyre reminds me of Phryne’s Jack Robinson – the TV version and not the one in the books. They are both police officers, and even both have the same rank. And they are about the same age, somewhere in their 30s, and both came out of the war relatively unscarred. They are also both methodical investigators, and they are both above reproach as officers. And they are both rather handsome – but handsome is as handsome does, and they both do quite well.

The investigation that Redfyre finds himself in the middle of is dark and deadly. A young female trumpet player is receiving deadly poison pen letters, and an attempt is made on her life after a Christmas concert at the college – an attempt that Redfyre witnesses due to machinations on the part of his redoubtable Aunt Hetty.

As he investigates, he finds himself following a trail of bodies, all of young women who in one way or another challenged the status quo. A status quo that kept most women on their Victorian pedestals and subservient to or chattels of the men in their lives – even after all the changes wrought by the war.

Redfyre discovers that all the victims are members of an unnamed group of women’s suffragists who want universal female suffrage and so much more, and are willing to use rather underhanded means to reach their goals.

While those underhanded means fall short of murder, someone is willing to murder them to stop them from taking what he sees as places that are rightfully and properly reserved for men.

It’s up to Redfyre to figure out whodunnit before the killer gets to his Aunt Hetty’s name on his murder list.

Escape Rating B-: I have mixed feelings about Fall of Angels. I liked John Redfyre, his “beat” in Cambridge, and what looks to be his cast of regulars.

The between-the-wars period is always interesting. The way things used to be was the first casualty of the Great War, and most people are aware that whatever happens next is going to be very different. It is also the period called the “Roaring 20s” when everyone was celebrating hard to forget the war. That it all comes crashing down at the end of the decade is not yet on the horizon in 1923 when this series begins.

University towns, and Cambridge is certainly that, are also hotbeds for mysteries. The college brings in lots of outsiders, and the town vs. gown conflict is ever ready to produce criminal activities, whether violent or not. And the faction rivalry results in a lot of conflicting pointing fingers once the deed has been done.

So there’s a lot to like. But the crime that Redfyre has to solve in his initial outing feels anachronistic, or at least his attitudes do. Or both.

Not that there were not plenty of women agitating for universal suffrage after the war. They were eventually successful in 1928. But much of what this nameless group is proposing feels too serious for the story, while their actions to achieve their ends seem almost farcical. It felt like it should either be melodrama or drama, but not both at the same time. Other readers may feel differently.

So for me, the blend did not quite work. But I liked Redfyre enough that I’ll probably come back for the next book in the series, just to see how things turn out.

2 thoughts on “Review: Fall of Angels by Barbara Cleverly”