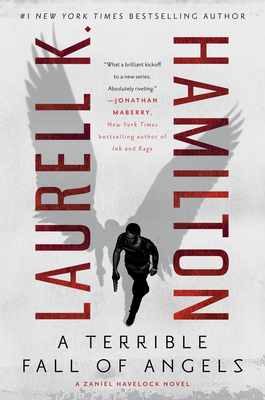 Angels walk among us, but so do other unearthly beings in this brand new series by #1 New York Times Bestselling author Laurell K. Hamilton.
Meet Detective Zaniel Havelock, a man with the special ability to communicate directly with angels. A former trained Angel speaker, he devoted his life to serving both the celestial beings and his fellow humans with his gift, but a terrible betrayal compelled him to leave that life behind. Now he’s a cop who is still working on the side of angels. But where there are angels, there are also demons. There’s no question that there’s evil at work when he’s called in to examine the murder scene of a college student—but is it just the evil that one human being can do to another, or is it something more? When demonic possession is a possibility, even angelic protection can only go so far. The race is on to stop a killer before he finds his next victim, as Zaniel is forced to confront his own very personal demons, and the past he never truly left behind.
The first in a new series from the author of the Anita Blake and Merry Gentry series.

First, I have to say that I’m surprised at just how good this book is. Pleased as punch, but also surprised as Heaven, as the characters in the book would say.

Second, I feel the need to say upfront that nobody gets laid in this book. I know that’s a strange place to start a review, but as one of the many readers who loved the first few Anita Blake books before they got to be a sex-fest, I felt like that needed to be said early on because it became such an overwhelming feature of both the Anita Blake and Merry Gentry series.. Not that there isn’t a potential romance brewing – actually more than one – but this book goes back to the good old days of urban fantasy, back when the main character had a magical or mysterious crime to solve and a love life like a sinking ship. When the focus was on the story and the world and the insanely powerful beings who were out messing things up and not on how many people the protagonist could get between the sheets.

The above is probably going to disappoint some readers who are expecting more of like her other series, but it was a relief to me. Your reading mileage may vary.

Zaniel “Havoc” Havelock is a detective in the Metaphysical Coordination Unit of the City of Angels, which is probably a stand-in for the city of Los Angeles, whose name literally translates from Spanish as “the Angels”. His world, and his city, are a variation of our own, not just a place where magic works, as is so often the case in urban fantasy, but a place where angels manifest in the world and where specially talented children, including Zaniel once upon a time, are recruited by the hierarchy that serves the Angels to be their representatives here on Earth.

Zaniel was trained to be an angel-speaker. But something broke – it seems like a lot of things broke – just as he was about to take his final vows. So he left, joined the army, and eventually became a cop who deals with crimes that involve angels and/or demons. And that’s where we meet him, called into a case because an angel has deliberately left a feather at the scene of a rape/murder that otherwise has no ethereal or infernal overtones whatsoever.

Until the angel who left that feather tells Zaniel that circumstances are not at all what they appear, and that there is something infernal going on in the City of Angels that not just should not be happening but that should not even be capable of happening.

And that it is up to Zaniel to pick up the mantle he left behind, or at least as much of it as he is willing to carry, figure out what has gone so terribly wrong, and fix it – along with possibly himself – before the impossible-to-exist demon gets too big for anyone to possibly stop.

Escape Rating A: I have to say that I picked this up because my curiosity bump itched something fierce. I loved the early Anita Blake books, back when in the day when they were urban fantasy with just a hint of paranormal romance, but I kept on reading long after they turned into recitations of just how much sex Anita had. At least the Merry Gentry series started out that way, so I knew what I was getting into. But for me, at least, there’s a point where other people’s sex lives gets boring, and Anita passed that somewhere earlier in the series than when I finally stopped reading it.

So I came into this book with a whole lot of reading baggage in the hopes I might get to drop some of it. And I’m extremely happy to say that I was able to drop pretty much all of it. Because A Terrible Fall of Angels harkens back in the best way to the early Anita Blake books. It’s solidly urban fantasy, with terrific setup and just enough otherworldly world building to create a strong foundation for a new series.

And in Zaniel “Havoc” Havelock the author has created an appropriately tormented detective with a fascinating background and a foot in both camps. He’s a veteran police detective in the unit that handles crimes that are wrapped around the axle of angels and demons, who are real and manifest entirely too frequently in our world – to both their and our cost.

Because what’s good for the demons, and even what’s good for the angels, might not be what’s good for humanity. As Havoc knows entirely too well. As the story opens, we don’t know what happened in Havoc’s past to tear him away from his upbringing in the College of Angels and place him on the streets of the city as a cop. We just know that whatever it was it was heartbreaking in a way that is still echoing through his life like the tolling of a bell.

The other thing we know about Havoc is that his current personal life is a mess. He’s separated from the wife and child that he loves because she can’t handle being a cop’s wife. They’re still in counseling but even though there seems to be some hope at the end of this story I honestly hope they don’t make it. It reads like there’s something wrong with her – or wrong with the way she treats him – that can’t be fixed.

On the other hand, and very different from the author’s previous series, Zaniel is still married, still hopeful, and still in love with his wife. He finds other women attractive, and he’s tempted but he never crosses that line. And that was a huge surprise throughout the entire book.

One of the things that fascinated me about the way that this world and its magic systems are set up is that in spite of the influence of angels and demons, all faiths and belief systems are recognized as not just valid but as having actual power – by everyone except those who serve the angels. A conflict that I suspect is going to become more overt and more problematic as the series continues. Or at least I hope so.

This turned out to be a fast one-day read for me. I absolutely could not put it down. It reminded me of the early Anita Blake books in all the best ways, particularly the way that it seemed like there was a force embedded between the pages that kept me reading late into the night because I was so caught up in the story and it was just so good.

The world here is complex and compelling. Even as Havoc keeps unravelling the case and the case keeps on unravelling all the trauma in his past, there’s just so much going on and it was all just so captivating that I kept reading long after the point where I should have called it a night because I could not stop. I loved Zaniel as a character and really liked the cop shop vibe of the people who surround him at work in spite of not really liking his wife at all but still loving his continuing to try to make things better.

And the creeping evil of the crime spree put just the right amount of shiver up my spine. This was just very well done all the way around. I want more! Please!

2 thoughts on “Review: A Terrible Fall of Angels by Laurell K. Hamilton”