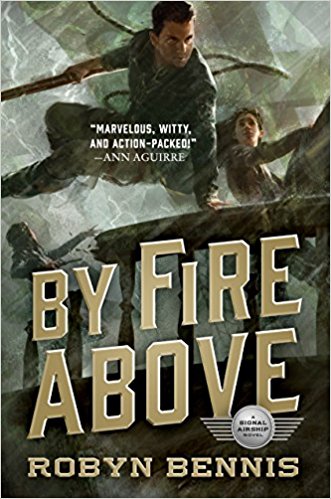 "All's fair in love and war," according to airship captain Josette Dupre, until her hometown becomes occupied by the enemy and her mother a prisoner of war. Then it becomes, "Nothing's fair except bombing those Vins to high hell."

Before she can rescue her town, however, Josette must maneuver her way through the nest of overstuffed vipers that make up the nation's military and royal leaders in order to drum up support. The foppish and mostly tolerated crew member Lord Bernat steps in to advise her, along with his very attractive older brother.

Between noble scheming, under-trained recruits, and supply shortages, Josette and the crew of the Mistral figure out a way to return to Durum―only to discover that when the homefront turns into the frontlines, things are more dangerous than they seem. 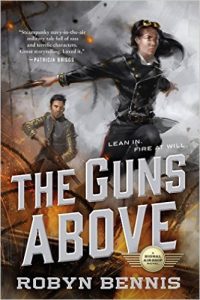 By Fire Above is the direct sequel to last year’s absolutely awesome The Guns Above. If you enjoy your SF with a hint of steampunk, really snappy dialog and fantastic kick-ass heroines, The Guns Above might just be your jam. It certainly was mine.

That this is a direct sequel to the first book is a zeppelin-sized hint that this book makes no sense whatsoever without having read the first book first. Not only is that where the situation is setup, but it’s also the foundation of all of the important relationships that power this particular series.

By that I mean the all-important frenemy relationship between Captain Josette Dupre and the foppish spy/supernumerary Lord Bernat Hinkal. If you don’t know how they began, you can’t really understand what happens between them here.

In this world where airships are not merely blimps but actual weapons of war not dissimilar to naval ships, Josette Dupre is an anomaly. Women are barely tolerated in the Garnian Signal Corps. She’s not supposed to be a “real” officer, and she’s certainly not supposed to command either ships or men. That she has turned out to be the best captain in the Signal Corps provides no end of embarrassment, consternation, annoyance and downright obstructionism at every turn.

Josette has no idea how the game is played, and she’s no good at playing it. She just wants her ship back in the air and back in the fight. But most of the first half of By Fire Above is tangled up in all the ways that the powers that be try to prevent that from happening.

So Josette spends the first half of the story on the ground playing politics badly and dealing with personal relationships she has no clue about. What makes this part of the situation so incredibly messy is that her hometown of Durum was captured by the enemy Vinz at the end of The Guns Above, with her mother trapped inside. She is desperate to persuade someone, anyone, that Durum can and should be retaken.

To make matters more confusing, Lord Bernat, usually called Bernie, seems to be in love with her mother. While on the ground, Bernie’s older brother Roland begins courting Josette. The relationship between Bernie and Josette was messy enough before their romantic lives became so weirdly intertwined.

The part of this story that focuses on the neverending war between the Garnians and the Vinz is way more compelling, and once the ship lifts, the story moves into high gear. And then it really flies, headlong into danger, trying to snatch victory from the jaws of defeat, and keeps pouring on more power until the absolutely wild conclusion.

And we’ll be back, and that’s the best thing of all.

Escape Rating A-: I absolutely adored The Guns Above. It was my first A+ review of 2017, and definitely made my Hugo ballot for the year – even if it wasn’t nominated.

So I had high hopes for By Fire Above. And those hopes turn out to have been a bit higher than the Mistral can actually fly. Which does not mean that I did not enjoy By Fire Above, or that it is not a good book and a great continuation to a marvelous story.

It just didn’t quite live up to its predecessor.

This story flies highest when the ship is off the ground, even when Josette isn’t actually aboard her. The first part of By Fire Above is all on the ground. The Mistral is in tatters, Josette has to battle the quartermaster to scrounge parts, and she has to spend a lot of time biting her tongue.

Her side is losing the war. It is obvious to all of those fighting it, but to none of the aristocrats and fops back in the capital. It is axiomatic that generals fight the last war, not the current one. Garnia has not lost a war in over 3 centuries. None of the ruling class are able to wrap their tiny minds around the idea that just because it hasn’t happened before does not mean it can’t happen now – especially if that reputation is not backed up by well-trained boots on the ground and strong ships and crews in both the air and the sea. Garnia has been resting on its laurels for far too long, while the Vinz have lost too many times and are determined to win this time – and have the trained soldiers and top-notch equipment to make it not just possible, but downright likely.

A lot of what makes this book interesting is the relationship between Bernie and Josette, and so far at least, that relationship is not a romance and is not veering into “will they, won’t they” territory. Bernie is in love with Josette’s mother, and Josette is falling for Bernie’s brother. Whether those relationships are at least partially about dealing with their feelings for people they can’t have is anyone’s guess.

But Josette’s romantic life is certainly a distraction from her true calling as an airship captain, and her continuing battles against the bureaucracy to retain her rank, ship and crew. I found those battles in The Guns Above much more riveting than any digressions into Josette’s love life in By Fire Above.

However, Bernie’s character arc continues to fascinate. He began as a self-absorbed and self-confessed spy for the government, determined to bring Josette down by fair means or foul. But by the end of this book, he has both changed and not changed. He is still a fop, and he is still self-absorbed, although it feels like some of that is an act. He has also discovered that he has found a place where he belongs, whether because or in spite of the violence it requires. Underneath that overdressed exterior lurks the heart of a warrior, and Bernie is just as surprised as anyone to discover it.

One of the things that ties Josette and Bernie together, particularly in By Fire Above, is the way that both of their identities are shaken, and in completely different directions. On the one hand, Josette discovers that everything she knows about herself has been a lie. Whether those revelations will shake her in the present or the future are yet to be determined.

On the other hand, Bernie has spent his life, at least until he first boarded the Mistral, as an example of the dangers of being a second son. He had no purpose, no ambition, and nothing to spend his time on except wasteful frivolity. He was in danger of dying of boredom. Now he isn’t certain of who he is or what he is becoming, not to mention whether he’ll live to see the next morning – but he’s alive for every second of it. It may be the making of him. We’ll see.

The twists and turns of the battle to retake Durum kept me on the edge of my seat. It wasn’t just about war and fighting – so much of that story had a surprising amount of depth and resonance, and definitely set the stage for book 3. This series is clearly not over.

Amazingly, By Fire Above ends on both a bang and a whimper – even if that whimper is coming from the reader. I can’t wait for the next chapter in this saga, hopefully this time next year!

Review: The Armies of Heaven by Jane Kindred