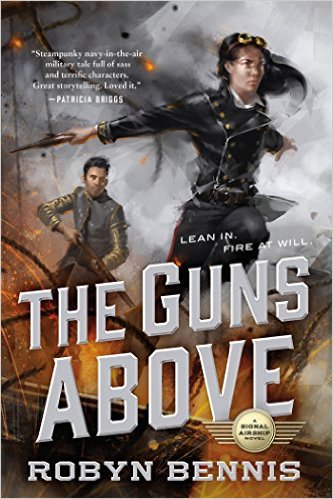 The nation of Garnia has been at war for as long as Auxiliary Lieutenant Josette Dupris can remember – this time against neighboring Vinzhalia. Garnia’s Air Signal Corp stands out as the favored martial child of the King. But though it’s co-ed, women on-board are only allowed “auxiliary” crew positions and are banned from combat. In extenuating circumstances, Josette saves her airship in the heat of battle. She is rewarded with the Mistral, becoming Garnia’s first female captain.
She wants the job – just not the political flak attached. On top of patrolling the front lines, she must also contend with a crew who doubts her expertise, a new airship that is an untested deathtrap, and the foppish aristocrat Lord Bernat – a gambler and shameless flirt with the military know-how of a thimble. He’s also been assigned to her ship to catalog her every moment of weakness and indecision. When the Vins make an unprecedented military move that could turn the tide of the war, can Josette deal with Bernat, rally her crew, and survive long enough to prove herself to the top brass?

The Guns Above is an absolutely fantastic steampunk/Military SF action adventure story. This is one of those stories where it’s science fiction mostly because it isn’t anything else. The only SFnal element is the “not our world” setting and, of course, the airships. Those marvelous airships.

But in its protagonist of Lieutenant Josette Dupre, we have an avatar for every woman who has had it drummed into her head that “in order to be thought half as good as a man she’ll have to be twice as good. And that lucky for her, that’s not difficult.” And we’ve all heard it.

And on my rather confused other hand, it feels like Josette Dupre is Jack Aubrey, which makes Bernat Hinkal into Stephen Maturin. I’m having a really difficult time getting my head around that thought, but at the same time, I can’t dislodge that thought either.

Yes, I promise to explain. As well as I can, anyway.

Lieutenant Dupre technically begins the story as an Auxiliary Lieutenant, because women aren’t permitted to be “real” officers. Or give orders to men. Or participate in battles. Or a whole lot of other completely ridiculous and totally unrealistic rules and regulations that seem to be the first thing thrown over the side when an airship lifts.

Dupre is being feted as the winner of the Garnians’ recent battle in their perpetual war with the Vinzhalians. A war which to this reader sounds an awful lot like the perpetual 18th and even 19th century wars between England and France. (Also the 14th and 15th centuries, better known as the Hundred Years’ War, because it was)

Who the war is with, and which side anyone is one, don’t feel particularly relevant, although I expect they will in the later books in this series that I am crossing my fingers for. What matters to the reader is that we are on Dupre’s side from beginning to end, against the Vinz, against the bureaucracy, against her commanding officer, against the entire world that is just so damn certain that she is incapable of doing the job she is manifestly so damn good at.

And we begin the book pretty much against Lord Bernat Hinkal, because his entire purpose on board Dupre’s ship Mistral is to write a damning report to his uncle the General, giving said General grounds for dismissing the first female captain in the Signal Corps. It doesn’t matter how much utter fabrication Bernat includes in his report, because whatever terrible things he makes up will be believed. There are plenty of reactionary idiots in the Army and the government who believe that women are incapable of commanding, therefore Dupre must be a fluke or a freak of nature or both.

The General is looking for ammunition to shoot down, not just Dupre, but the notion that the Garnians are losing their perpetual war, or at least running out of manpower to fight it, and that womanpower might possibly be at least part of the answer. But the General, like so much of the military hierarchy, is content to rest their laurels and their asses on the so-called fact that Garnia hasn’t lost a war in over three centuries, therefore they can’t be losing this one now.

The past is not always a good predictor of the future, especially when combined with the old truism that generals are always fighting the last war.

But what happens to Bernat, and to the reader, is that we follow in Dupre’s wake, observing her behavior, her doubts, her actions and her sheer ability to command not just her crew’s obedience but also its fear, its respect and even its awe. Dupre, whether in spite of or because of her so-called handicap of being female, is a commander that troops will follow into the toughest firefight – because she is their very best chance at getting to the other side alive – no matter how desperate the odds.

Dupre, her airship Mistral, and The Guns Above are all winners. The Garnian military hierarchy be damned.

Escape Rating A+: It’s obvious that I loved The Guns Above. I got completely absorbed in it from the very first page, and was reluctant to put it down at the end and leave this world behind. Dupre is a marvelous hero who has clear doubts and fears and yet keeps on going from one great thing to another. Part of what makes her fantastic is that she hears that still small voice inside all of us that says we’re faking it, but forces herself to keep going anyway. She exhibits that best kind of courage – she knows she’s terrified, but she goes ahead anyway. Because it’s her duty. Because she knows that, in spite of everything, she is the best person available for the job. Not that she’s the best person in the universe for it, she has way too much self-doubt for that, but that in that place and in that time she’s the best person available. And to quote one of my favorite characters from a much different universe, “Someone else might get it wrong.”

The way that this world is set up, and the way that the setting up proceeds, reminds me tremendously of the Aubrey/Maturin series by the late Patrick O’Brian. That series features a British naval officer during the Napoleonic Wars, along with the friend that he brings aboard his first (and subsequent) command. Like Dupre, Jack Aubrey is also a lieutenant in his first outing, called “Captain” by courtesy when aboard his rather small ship. As is Dupre. Also like the Aubrey series, there is a tremendous amount of detail about the ship and the way it is rigged and the way that the crew behaves. The reader is virtually dumped into a sea of lines and jargon, and it makes the setting feel real. In the O’Brian series it was real, and here it isn’t, but the feeling is the same, that this is a working ship and that this is the way it works.

Also the focus here, like in the O’Brian series, is on this battle and this action and this fight, not on the greater politics as a whole, most of the time. It feels like the Granians are England in this scenario, and the Vinzhalians, France. This is not dissimilar to the Honor Harrington series, where Honor is Jack, Manticore is England, and Haven is France. “This has all happened before, and it will all happen again.”

Dupre is only a resident of the halls of power when she is about to receive a dressing down, as is Jack Aubrey in the early days.

But the comparison of Aubrey to Dupre makes Bernat into Maturin, and it actually does work a bit. But where Maturin was a doctor and discovered a function aboard the ship early on, Bernat is rather different. He’s a spy for his uncle, and Dupre knows it. He also begins the journey as a completely useless supernumerary whose only task seems to be to foment small rebellions. Also he’s a complete fop and as out of place on a ship of war as fox in a henhouse. Until he gets every bit as caught up in the action as the reader.

The fascinating thing about Bernat is that he neither changes nor reforms. And yet he does. At the beginning of the story he’s a complete fop, more concerned about his dress, his drink and the quality of his food than he is about anything else, including the progress of the war. He believes what he has been taught. At the end of the story, he is still a fop. But his eyes and his mind have been opened. Partially by Dupre, and partially by the rest of the crew. And, it seems, partially by finding something that he is good at. Aboard the Mistral, he has a positive purpose. On land, only a negative one. And it changes his perspective while not changing his essential nature.

At least not yet. Finding out where he goes from here, along with what plan to be the wild gyrations of Dupre’s career, looks like it’s going to be fascinating. And I can’t wait.

The Guns Above has received my first A+ Review for 2017, and will definitely be on my “Best of 2017” list, along with my Hugo nominations next year. This book is absolutely awesomesauce.

3 thoughts on “Review: The Guns Above by Robyn Bennis”