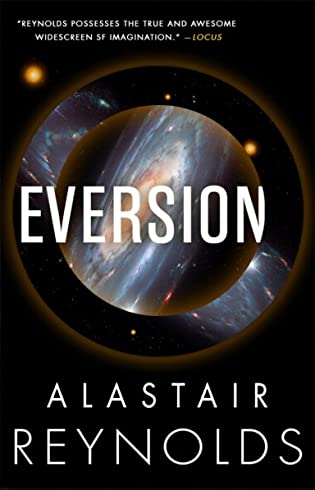 From the master of the space opera, Alastair Reynolds, comes a dark, mind-bending SF adventure spread across time and space, Doctor Silas Coade has been tasked with keeping his crew safe as they adventure across the galaxy in search of a mysterious artifact, but as things keep going wrong, Silas soon realizes that something more sinister is at work, and this may not even be the first time it's happened.
In the 1800s, a sailing ship crashes off the coast of Norway. In the 1900s, a Zepellin explores an icy canyon in Antarctica. In the far future, a spaceship sets out for an alien artifact. Each excursion goes horribly wrong. And on every journey, Dr. Silas Coade is the physician, but only Silas seems to realize that these events keep repeating themselves. And it's up to him to figure out why and how. And how to stop it all from happening again.

Humans process ideas, events and catastrophes through stories, whether by telling them, making them or being swept away by them. It’s why things like Aesop’s Fables and the Arthurian legends, the Greek tragedies and Pride and Prejudice have all lasted so very long yet still change in interpretations and retellings as society changes. Those stories still have universal things to say about the human condition, so we keep telling them.

This is a story about processing a tragedy by telling stories around and about it until it can be approached directly. So the reason the story is told, and re-told, very nearly ad infinitum, is to give the protagonist enough time and distance to process something that he can’t bring himself to face.

No matter how much he needs to.

The way he does it is to put himself inside a story. It’s the story of a doomed exploratory ship, at the edges of the known world, searching for a possibly mythical ice fissure that will lead to an epic, world-shaking, discovery.

First, it’s a sailing ship in the Arctic. Our hero is the ship’s surgeon, who is also writing a fictional tale of adventure in the vein of Jonathan Swift and Robert Louis Stevenson. And when the doctor’s tale went awry, and he effectively rebooted his story, moving it forward to the age of steam and erasing the disaster that killed all his passengers, I was lulled into thinking this was about the story he was writing.

And it sort of is, but it really isn’t.

It’s only then that he, and we, discover what looks like the truth. And that it’s even worse than anything he ever imagined. 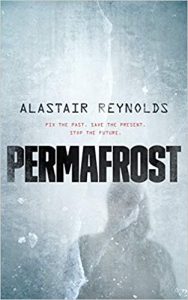 Escape Rating A: The author of Eversion is best known for his epic, space opera type science fiction, but if that’s what you’re looking for you’re not going to find it in Eversion. Very much on the other hand, if you enjoyed the small-scale, small-cast, intimate story of his Permafrost, which I most definitely did, there’s a LOT to love in Eversion.

In the first iteration, the reader, or at least this reader, gets caught up in the story of the sailing ship Demeter’s expedition to the Arctic fjords of Scandinavia to find a mysterious ruin, or artifact, or both, referred to as the edifice. There was more than enough creeping dread, combined with the hunt for treasure and the details of sailing ship life to make me think this was a very strange but compelling combination of The Route of Ice and Salt, the Aubrey and Maturin series (Master and Commander) with Dr. Silas Coade as Maturin, and something like Indiana Jones and the Edifice of Doom. At least until Coade is forced to rewrite his story after a catastrophe kills off all the characters.

And that’s the first inkling that they might be HIS characters, part of the adventure story he’s writing.

At least until it happens again. And then again. At which point I thought I’d wandered into Groundhog Day. or to use more genre-appropriate references, the Stargate SG-1 episode Window of Opportunity or the Star Trek Next Gen episode Cause and Effect.

Along with one fascinating variation on Jules Verne’s Journey to the Center of the Earth.

As I said at the beginning, stories are one of the ways that humans process, and Eversion reminded me of more and more stories, also more and more SFnal stories, as it went through its iterations, or versions.

Until we finally get to the point of “eversions” and discover that everything we thought we might be reading isn’t quite right at all. Although in a very peculiar way it is at the heart of all of the stories.

And that even though the heart they have isn’t quite the one we thought it was, it still manages to break ours. If you’re looking for the kind of SF that will blow your mind and break your expectations, Eversion is a gem.

One thought on “Review: Eversion by Alastair Reynolds”