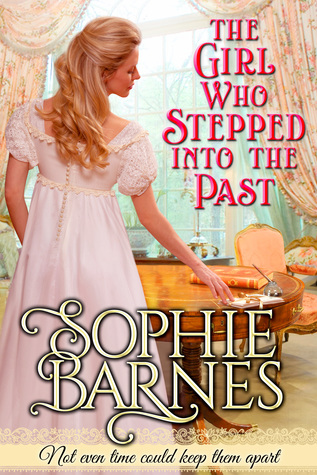 She was looking for inspiration…

When historical romance author Jane Edwards goes to England on a research trip, she doesn’t expect to travel two hundred years into the past. She also doesn’t expect to be accused of murdering the Earl of Camden’s sister. Presented with few choices, Jane decides the best course of action is to help Camden find the real killer. But the more time she spends in his company, the more she falls for the dashing earl, and the more she hopes for a life with him by her side.

And found love in the most impossible place.

James Sullivan, Earl of Camden, is convinced Jane had something to do with his sister’s murder. Until he learns she lacked the ability to accomplish the feat. Still, her explanation about stopping by his home in the middle of a rainstorm to seek employment, doesn’t add up. And yet, when he offers her the position she supposedly seeks, he discovers the smart resourceful woman she is. Which makes him wonder if marrying his new maid, might be worth the risk of scandal.

It’s a tale as old as time – or at least as old as the concept of time travel. The premise will sound familiar to anyone who has read any time travel romances. The details change a bit. In this particular version of this old tale, a woman who is looking for a fresh start after the end of a relationship falls in love with a man in a portrait. When the thunder booms and the lightning cracks, she finds herself back at the period of that portrait, face to face with the man of her dreams.

When the trope is as tried and true as this one, whether a particular variation of it stands out from the crowd lies with the execution – because we know how it’s going to end. Somehow there’s going to be an HEA, whether in the past or the present. Or it’s going to be a tragedy, but romance writers generally don’t go there. Readers love their HEAs after all.

Although the beginning of this one reminded me particularly of Timeless Desire by Gwyn Cready, in the end it mostly recalled The Geek Girl and the Scandalous Earl by Gina Lamm. Both of those stories were a lot of fun, and The Girl Who Stepped Into the Past is as well.

Jane Edwards doesn’t merely find herself in the Regency period that she has studied long and hard as part of her research for her own series of historical romance novels, she finds herself standing over a dead body in the middle of a unsolved murder. A murder that was never solved, so she does not have any future knowledge about who done it.

In an era where circumstantial evidence ruled, her position is rather damning. The Earl of Camden, the man that Jane has fallen for via his portrait, is certain that Jane must have just killed his sister. Jane has her work cut out for her, not only proving her innocence but also explaining her sudden presence in the middle of the English countryside.

Jane turns out to be more than up to the task. But involving herself in the life and household of James Sullivan, Earl of Camden, causes her no end of problems, as one might expect. The two bond over their investigation into his sister’s death, in spite of Jane’s rather unconventional appearance and manners.

Jane begins to realize that James is the man she has been looking for all of her life. But falling in love has its own risks. Will he believe her strange story? Is he willing to be shunned by society to marry a woman who at best seems to be an American adventuress? And is Jane willing to give up the safety, convenience, freedom and loneliness of the 21st century for life with the man she loves in a world that will otherwise never accept her?

And will solving the murder change history too much to make any of their wishes even remotely possible?

Escape Rating B: This is a fun little story. I enjoyed reading it but it doesn’t rise above some of the truly great time travel stories like Outlander and The Jane Austen Project. And there are plenty of nods to Jane Austen herself in this story.

Jane Edwards, our heroine, is a lucky woman. By the time she tells him, James manages to believe her story, as outlandish as it seems. He believes, perhaps, just a bit too easily. I considered it all part of the handwavium of time travel and didn’t let it bother me too much.

Jane does have an awfully easy time figuring out who killed James’ sister. To the point where the reader may be surprised that she was a Regency romance author and not a mystery author! But it is all in good fun, at least fun for anyone not the victim or the perpetrator.

The heart of the story is the romance between Jane and James. While they fall in love rather quickly, the dilemma they face is the one that tears at the heart. She might be able to go back. It will be difficult for a 21st century woman to live with the restrictions imposed on women in the 19th century. If she stays so they can marry, James will be shunned by his peers for the rest of his life, and that shunning may also fall on any children they have. They have to be willing to give up a great deal in order to be together. What we feel for, in the end, is the internal conflict they each have to resolve and their ultimate willingness to be all to each other, and to hell with what the rest of the world thinks.

And that’s a hard thing to do under any circumstances, time travel or no time travel. By the time they reach that ultimate decision, we are right there with them.

Sophie is giving away a signed print copy of The Girl Who Stepped Into The Past + a $10 Amazon gift card to one lucky winner on this tour.

3 thoughts on “Review: The Girl Who Stepped Into the Past by Sophie Barnes + Giveaway”