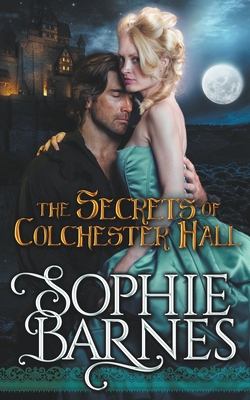 As one of six possible candidates vying for Viscount Sterling's hand, Lady Angelica has been invited to stay at his grand manor for a week-long house party. But an unpleasant feeling lurks within Colchester Hall. It's almost as if someone's watching Angelica just beyond the edge of her vision. And while she tries to explain the chill creeping up behind her as merely a draft, she can't shake the feeling that something disturbing might be at play.
When Sterling decides she's the woman he wants, can Angelica accept her new home and the sinister secrets she fears it might hold, or will she give up on true love because of what could prove to be nothing more than her own imagination?
NOTE: This novella was previously included in the anthology, Wicked Liaison

It’s not illogical that the result of a man discovering that his late wife was unfaithful would be for him to ensure that his next wife wouldn’t be tempted. Or in the case of Viscount Randolph Sterling’s search for a new bride, wouldn’t be tempting to others.

The problem is that his next viscountess really does need to be tempting to him.

It’s a conundrum that he intends to solve by inviting six women who are “on the shelf” to his home, with their chaperones, in the hopes that one will strike his fancy – even if it seems that the entire ton has labelled them as unmarriageable for one reason or another.

Three are shy to the point of paralysis, which explains their lack of previous offers. One is a bit shy, but is mostly disqualified because she’s already in love with someone else, who of course doesn’t seem to notice that she exists. (I really liked Lucy and wouldn’t mind seeing her story!)

One of the eligible ladies has the personality of a narcissistic velociraptor. And I might have just insulted velociraptors. It’s clear upon first meeting that the reason no one has offered marriage to Lady Seraphina is because she’s a vicious bitch. And again, that’s an insult to both vicious people and bitches. She’s a piece of work.

That leaves our heroine, Lady Angelica. She’s not shy. In fact, many might say that her lack of shyness, certainly her lack of what was considered decorum and proper behavior for ladies, was the reason that no one – at least so far – had wanted to marry her. Angelica speaks her mind, to the point where she is considered to be blunt to a fault.

Angelica is exactly what Randolph Sterling has been looking for. Over the course of a week where he “interviews” all of his prospective brides, he already knows that he has made his choice.

If Angelica will agree. And if the malign spirit that seems to haunt Colchester Hall will let her live long enough to reach the altar.

Escape Rating B+: For a surprisingly short book, The Secrets of Colchester Hall manages to encompass some seriously creepy Gothic chills while solving the mystery of those titular secrets and leading to a satisfactory – and heated – romantic happy ever after.

Of course, the protagonists need the heat of that HEA to get over the chills induced by those terrible secrets.

The Secrets of Colchester Hall is billed as a gothic romance, and was originally published as part of an anthology of gothics. Gothic romances are a subgenre that isn’t as popular as it was once upon a time, so it was fascinating to read one that invoked some of the classics of the genre.

There are hints of Jane Austen’s Northanger Abbey, to the point where that story is deliberately lampshaded in the bookstore when the hero recommends the book to the heroine. A heroine who is a fan of such gothic romances, as is the heroine of Northanger Abbey herself.

But it feels like the real inspiration for this foray into those secrets at Colchester Hall is Dame Daphne du Maurier’s classic creeper Rebecca. The story has several similar elements, enough to let a reader predict at least some of the outcome. But it stands more than well enough on its own to keep the reader shivering and turning pages to the very last.

What makes this one stand out is the character of Angelica. Her bluntness and plain-speaking make her easy for contemporary readers to identify with, and her willingness to say what she really thinks, no matter the social cost, provides the story with many of its best and most lighthearted moments – as well as providing Sterling with all the reasons he could ever want to ask Angelica for her hand.

Like most gothic romances, there is more than a bit of willing suspension of disbelief involved. The actual villain of the piece is flesh-and-blood and certainly among the living, and that person’s machinations are plausible. Sinister, murderous, manipulative, but still plausible. But there’s an element of paranormal woo-woo involved in most gothics and this one was no exception. Angelica is receiving messages from the beyond and those messages are getting her attention – as well as the attention of the villain. That the story requires her to believe those messages and for the hero to believe her and not have her committed, is a bit of a stretch.

A stretch that works, and chills the reader right to the bone.

2 thoughts on “Review: The Secrets of Colchester Hall by Sophie Barnes + Giveaway”