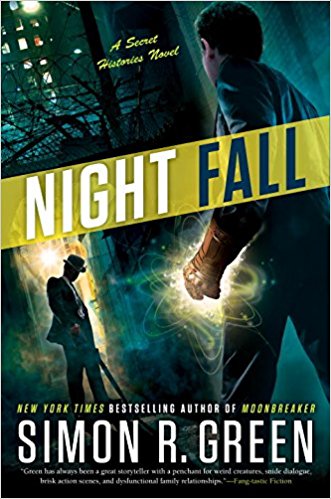 From the New York Times bestselling author of Moonbreaker comes the epic final Secret Histories adventure, where the Droods will take on the most unexpected of enemies: the inhabitants of the Nightside.

The Droods are all about control, making people do what they're told for the greater good. The Nightside is all about choice: good and bad and everything in between. The Droods want to make the world behave. The Nightside wants to party. They were never going to get along.

For centuries, ancient Pacts have kept the Droods out of the Nightside, but now the Droods see the Nightside as a threat to the whole world. They march into the long night, in their armour, to put it under their control. All too soon, the two sides are at war. It's Eddie Drood and Molly Metcalf against John Taylor and Shotgun Suzie. The Drood Sarjeant-at-Arms and their Armourer against Dead Boy and Razor Eddie. More groups join in: the London Knights, the Ghost Finders, the Spawn of Frankenstein, Shadows Fall, and the Soulhunters. Science and magic are running wild, there's blood running in the gutters, and the bodies are piling up.

Is anyone going to get out of this alive?

It’s the end of the world as they know it, in a hail of bullets and a shower of blood, with a chaser of hellfire. This is where the implacable force meets the immovable object – and both decide that they’ve had enough. 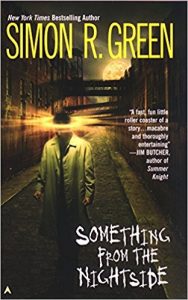 Night Fall is the official 12th volume of the Secret Histories. Unofficially, it’s also the 13th book of the Nightside and the 7th story about the Ghost Finders. And also the unofficial last and final volume of all of this author’s current long-running series, at least according to the note at the back. Night Fall, as its name implies, is an ending and not a beginning. An ending with a bang – and plenty of whimpering. But that’s the Nightside for you.

Consider that a warning – this isn’t the place to start with any of these series.

For those who have at least a nodding acquaintance with the Nightside and the Secret Histories, this is a conflict that feels inevitable. The Droods, the keeper of those ultra-secret histories, have felt duty-bound throughout the centuries to protect humanity at all costs – even from itself.

The Nightside feels like the Droods moral opposite. Where the Droods believe in law and order above all, as long as its their law and their order, the Nightside is a place of absolute freedom of choice. Even if those choices lead a person straight to heaven, or hell, or somewhere above or below either of them. Or out of this world, and possibly their minds, altogether.

The Droods have always wanted to bring the Nightside under their domain. The Nightside just wants to be left the hell alone. The Droods never leave anyone or anything alone – not once they have it or them in their sights.

The story begins as a cascade of events that start wrong and just go downhill from there. The dominos are falling, and the war that both sides say they don’t want moves from inevitably to being splashed bloodily and viscerally all over the Nightside.

But if dominos are falling, then who, or what, flicked that first tile?

And can John Taylor, the Walker of the Nightside, and Eddie Drood, the family’s rebel agent, figure out who set them against each other before the long night falls – and takes the Droods with it.

Escape Rating A: For readers familiar with at least some of this author’s worlds, Night Fall is an absolutely smashing, bang-up, explosive ending. Complete with smashing, banging and explosions, as well as at least a tip of the hat to possibly every major, interesting, colorful and/or profane character that has been created along the way.

It’s a blast. Sometimes with actual blasting powder – or substances even more explosive.

At the same time, Simon R. Green is an acquired taste, like oysters, or escargot, or chocolate-covered ants. Possibly complete with the “Ewww, I’m not really sure about this” reaction. And it’s the only one of the four that I’ve ever bothered to acquire.

The level of constant, utter, bloody-minded, so arch that it needs a keystone, snarkitude is bitter, wry and incredibly addictive – while at the same hard to swallow in a sustained gulp bigger than one book at a time. It’s marvelous and crazy and sometimes absolutely exhausting.

I love his work, but I can only read them one at a time. Part of that is because the uber-clever descriptions, introductions and backstories for each and every character tend to repeat if one attempts to binge-read. It’s been long enough for me that re-reading the character portraits of John Taylor, Eddie Drood, Suzie Shooter, Molly Metcalf and the rest gave me a sense of nostalgia. It was good to catch up with all my old friends, one last time.

Underneath the constant snark there are several interesting stories being told.

The biggest one is the one about just how thickly the road to hell is paved with good intentions. The Droods do want what’s best – admittedly for their definition of best, but their hearts at least begin in the right place. But the veneer of respectability proves to be much thinner than any of them expect. While there is an outside force that pushed the first domino, once it falls the Droods are more than happy to keep knocking more dominos, even extra dominos, all on the own.

The people of the Nightside are stuck playing defense. The Droods invade, and begin conquering their home block by block and street by street, leaving everything behind them paved with blood and guts. Some of it even their own. Surrendering doesn’t even feel like an option – because it isn’t.

While the Droods would frame this fight as a fight of good vs. evil, that’s only their interpretation. A closer interpretation, at least for their initial motivations, is a battle between order and chaos. But the Nightside isn’t truly chaotic, and the Droods have taken order to its tyrannical extreme. At which point they’ve lost the moral high ground they came in with.

It’s also interesting to see just how many older and darker powers both sides end up calling on, and how all of those occupying the thrones and dominations tell them to get stuffed and clean up their own messes.

Diving into Night Fall reminded me just how much I’ve enjoyed all of this author’s work, and why science fiction and fantasy, particularly urban fantasy, are always my go-to genres. Night Fall is the wildest of wild rides from its slam bang opening to its quiet close – and I savored every page of it.