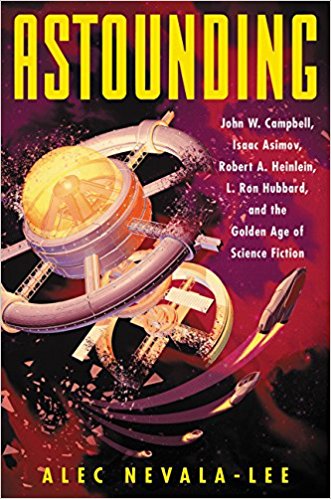 "Science fiction has been awaiting this history/biography for more than half a century. . . . Here it is. This is the most important historical and critical work my field has ever seen. Alec Nevala-Lee’s superb scholarship and insight have made the seemingly impossible a radiant and irreplaceable gift."—Barry N. Malzberg, author of Beyond Apollo

Astounding is the landmark account of the extraordinary partnership between four controversial writers—John W. Campbell, Isaac Asimov, Robert A. Heinlein, and L. Ron Hubbard—who set off a revolution in science fiction and forever changed our world.

This remarkable cultural narrative centers on the figure of John W. Campbell, Jr., whom Asimov called “the most powerful force in science fiction ever.” Campbell, who has never been the subject of a biography until now, was both a visionary author—he wrote the story that was later filmed as The Thing—and the editor of the groundbreaking magazine best known as Astounding Science Fiction, in which he discovered countless legendary writers and published classic works ranging from the I, Robot series to Dune. Over a period of more than thirty years, from the rise of the pulps to the debut of Star Trek, he dominated the genre, and his three closest collaborators reached unimaginable heights. Asimov became the most prolific author in American history; Heinlein emerged as the leading science fiction writer of his generation with the novels Starship Troopers and Stranger in a Strange Land; and Hubbard achieved lasting fame—and infamy—as the founder of the Church of Scientology.

Drawing on unexplored archives, thousands of unpublished letters, and dozens of interviews, Alec Nevala-Lee offers a riveting portrait of this circle of authors, their work, and their tumultuous private lives. With unprecedented scope, drama, and detail, Astounding describes how fan culture was born in the depths of the Great Depression; follows these four friends and rivals through World War II and the dawn of the atomic era; and honors such exceptional women as Doña Campbell and Leslyn Heinlein, whose pivotal roles in the history of the genre have gone largely unacknowledged. For the first time, it reveals the startling extent of Campbell’s influence on the ideas that evolved into Scientology, which prompted Asimov to observe: “I knew Campbell and I knew Hubbard, and no movement can have two Messiahs.” It looks unsparingly at the tragic final act that estranged the others from Campbell, bringing the golden age of science fiction to a close, and it illuminates how their complicated legacy continues to shape the imaginations of millions and our vision of the future itself.

They were the men who sold the moon – as well as the rest of the universe. Together they were the Golden Age of science fiction – in some ways both the quip that says that the golden age of SF is 12 and in the historical sense.

John W. Campbell, Jr. was the editor of what became the premiere outlet for science fiction writing during its and his heyday, from 1937 through 1946. Back in the days before SF became mainstream, the pulps were all there were, and Campbell’s Astounding was the top of the pulps as far as SF was concerned.

That golden age was when he found, mentored, developed or at least published two writers who became synonymous with SF, Isaac Asimov and Robert A. Heinlein, and the one who nearly broke it, L. Ron Hubbard.

Reality Rating A: First things first, this is surprisingly readable. There’s a lot of information packed in here, and it flows fairly smoothly from one page into the next. I was surprised at how completely I was drawn in and held over a very long flight. I expected to bounce in and out, and I just didn’t.

(That the book is only about ⅔ as long as it appears to be is probably a help. The final ⅓ consists of extensive notes. It is blissfully not necessary to flip back and forth between the text and the notes in order to get the story or the context. The author certainly did his homework, but it’s not required that one read it for the book to make sense.)

While Heinlein, Asimov and Hubbard have all been written about before, and in depth, Campbell really hasn’t. And certainly should have been. For the period when Astounding was at the top of the pulps, and for some time beyond, Campbell wasn’t just the editor of a magazine – he WAS science fiction in a way that just isn’t possible now that SF has gone mainstream. His role hasn’t been recognized, possibly because there is no real equivalent today.

This multi-biography attempts to set all four men in their time as well as their relationships to each other. And while on the one hand it feels both loving and respectful, on the other it doesn’t pull any punches when it comes to the darker side of all four – even though much of what we now consider that dark side generally passed social muster at the time it happened.

The book does a good job of giving context for why much of what we would consider bad behavior occurred, without ever minimizing it or apologizing for it. I’m thinking particularly of Asimov’s well-known propensity for pinching women’s bottoms and other places without their consent or even seeming to acknowledge that he needed their consent. That all the women in his various editors’ and publishers’ offices literally cleared the building whenever he had an appointment seems to be a message he just never got – and certainly should have.

All of them except Asimov seemed to have drunk to considerable excess. Towards the end of their lives both Campbell and Heinlein crossed the line from conservative to reactionary. None of them gave the credit to any of their wives that was certainly due.

Campbell’s racism undoubtedly affected his gatekeeping of the genre throughout his tenure at Astounding, and is in at least some part responsible for the whiteness of SF through his era and beyond. When some 21st century fans cry out for a “Campbellian Revolution” this is part and parcel of what they are looking back to and wanting to recreate.

And everyone was way more involved in the beginning of Scientology than seems to be widely known. Only Asimov steered clear, and even he got stuck arguing with Campbell about it on multiple occasions.

But we certainly see the hand of Campbell in the underpinnings of Hubbard’s Scientology – and we see a number of promising careers get sidetracked by it. Hubbard’s most of all.

These men were the giants upon whose shoulders the genre now stands, whether their influence was mostly positive, or in Hubbard’s case mostly negative. The author does a deft job of giving them their rightful place in SF history while showing that they all had feet of clay up to the knees. If not higher.

In the end, this is a fascinating study of a group of men who made this most popular genre what it became. And it’s a great read from beginning to end.

One thought on “Review: Astounding by Alec Nevala-Lee”