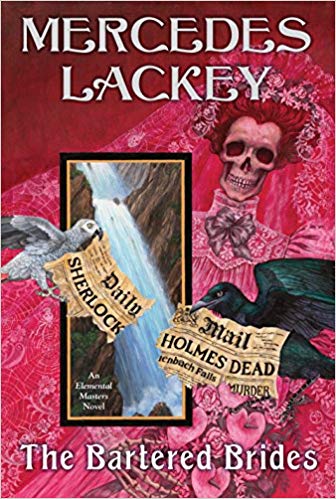 The threat of Moriarty is gone--but so is Sherlock Holmes.

Even as they mourn the loss of their colleague, psychic Nan Killian, medium Sarah Lyon-White, and Elemental Masters John and Mary Watson must be vigilant, for members of Moriarty's network are still at large. And their troubles are far from over: in a matter of weeks, two headless bodies of young brides wash up in major waterways. A couple who fears for their own recently-wedded daughter hires the group to investigate, but with each new body, the mystery only deepens.

The more bodies emerge, the more the gang suspects that there is dangerous magic at work, and that Moriarty's associates are somehow involved. But as they race against the clock to uncover the killer, it will take all their talents, Magic, and Psychic Powers--and perhaps some help from a dearly departed friend--to bring the murderer to justice.

The Bartered Brides is a Sherlock Holmes pastiche, as was last week’s Mycroft and Sherlock. But in spite of the two stories having more or less the same starting point, the Holmes canon, they couldn’t be any more different in tone or even genre.

Mycroft and Sherlock was a fairly straightforward, albeit excellent, historical mystery. The Bartered Brides on the other hand puts Sherlock Holmes in the midst of a Victorian urban fantasy. This is a world in which magic explicitly works, although most people, including Holmes himself, are at best reluctant to believe in it.

Although for a Sherlock Holmes pastiche, Holmes himself is conspicuously absent for most of this story. The Bartered Brides takes place at a well-known point in the official Holmes canon, after the events of Reichenbach Falls, where Holmes and Moriarty both fell to their purported deaths. And before the events of The Empty House where Holmes returns, not from death after all, but from a long sojourn around the world recovering from his wounds and mopping up the remainders of Moriarty’s criminal organization.

Unlike in the canon, Watson at least, as well as his wife Mary, know that Holmes is alive and on the hunt. Which means that they are also aware that Moriarty’s henchmen in London might very well be hunting them.

But in the meantime, Lestrade is desperate. He does not know that Holmes is still alive. All he knows is that the headless corpses of young women are washing up on the banks of the Thames. He is out of his depth – not atypical for Lestrade. But this case feels weird – and it is – so he calls in his best Holmes substitute, Dr. John Watson and the two young women who assist him with his magical cases, psychic Nan Killian and medium Sarah Lyon-White.

When even their best isn’t good enough, they consider dropping the case. Until an emergency meeting with Sherlock’s brother Mycroft, representing Her Majesty’s government and Lord Alderscroft, and leader of London’s Elemental Masters convinces them to stay on the case.

They are both certain that this isn’t the usual kind of serial killer at work. Instead, this series of crimes looks like it’s right up the darker alleys of elemental mastery. Alderscroft in particular is beginning to believe that an Elemental Spirit Master has gone to the bad. And if there’s someone in London dabbling in the foul waters of necromancy he needs to get it stopped.

Nan and Sarah are also right. It would be too much like a bad farce for there to be both a gang of Moriarty’s henchmen out committing evil AND a gang of necromancer’s assistants out doing evil at the same time – even in a city as big as London.

But what could one have to do with the other?

Escape Rating B+: This is a fun book and has become a fun series. Originally the Elemental Masters series seemed to revolve around reworkings of classic fairy tales across various points in time where magic users who were masters of their particular elements were part of the reworking of the tales. And some entries in the series were better than others. 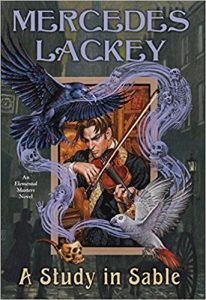 But a few books ago the author moved from reworking fairy tales to dealing with one legendary character in particular. In A Study in Sable she introduced her own versions of Holmes, Watson and the rest of the Baker Street crew. Sherlock was still very much his extremely rational self, but the Watson of this series is very different. His water mastery makes him much closer to Holmes’ equal, albeit in a different sphere. He also has allies and resources of his own separate from Holmes.

This redirection of the series really zings! It can also be read without reading the Elemental Masters series as a whole by starting with either A Study in Sable or an earlier volume which serves as a kind of prequel, The Wizard of London, which introduces the characters of Nan and Sarah as well as Lord Alderscroft, the titular “Wizard”.

The criminal conspiracies in this story do reduce to Occam’s Razor. Two separate gangs doing this much damage would be too much. It is a surprise however to see just how the one set of evil relates to the other – and they are both definitely very evil.

The truth about the headless corpses and their evil purpose will chill readers right down to the bone. As will the mastermind’s methods of obtaining them, which spotlights just how disposable working class women, especially young women, were at this point in history, as well as just how pervasive racial prejudices were at the time.

What makes this subseries so much fun is, of course, the cast of characters. The varying perspectives of this Watson with more agency, his equally powerful wife Mary, and the two young women who are determined to make an independent go of their world lets us see this version of Victorian London from it’s highest pinnacles to very nearly its lowest depths through the eyes of very sympathetic characters.

The villain in this case is deliciously and despicably evil, and we are able to see just enough of his horrible machinations to learn what he’s up to and to wholeheartedly concur with him receiving his just desserts.

This version of Victorian London is fascinating and magical, in both senses of the word. I hope we have plenty of return visits to look forward to! 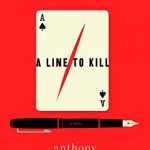