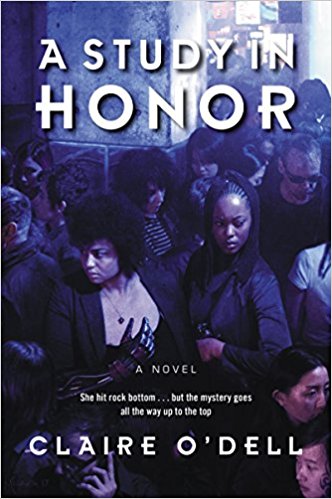 Dr. Janet Watson knows firsthand the horrifying cost of a divided nation. While treating broken soldiers on the battlefields of the New Civil War, a sniper’s bullet shattered her arm and ended her career. Honorably discharged and struggling with the semi-functional mechanical arm that replaced the limb she lost, she returns to the nation’s capital, a bleak, edgy city in the throes of a fraught presidential election. Homeless and jobless, Watson is uncertain of the future when she meets another black and queer woman, Sara Holmes, a mysterious yet playfully challenging covert agent who offers the doctor a place to stay.

Watson’s readjustment to civilian life is complicated by the infuriating antics of her strange new roommate. But the tensions between them dissolve when Watson discovers that soldiers from the New Civil War have begun dying one by one—and that the deaths may be the tip of something far more dangerous, involving the pharmaceutical industry and even the looming election. Joining forces, Watson and Holmes embark on a thrilling investigation to solve the mystery—and secure justice for these fallen soldiers.

This was a wow. Even better, it was a wow in ways that I wasn’t expecting, so excellent all the way around.

Admittedly, I bounced off A Study in Honor the first time I started it. I was expecting a Sherlock Holmes pastiche, which it sorta/kinda is, but that’s not really apparent at the beginning. At the beginning, we’re following Dr. Janet Watson as she gets the shaft from the VA after losing her arm in combat.

But the war isn’t going well, is extremely unpopular, and the VA is sucking hind tit in the federal budget. Some things never change.

This war, unlike the perpetual war in Afghanistan that injured both the original Dr. John Watson and his 21st century incarnation in Sherlock, is a civil war. In what has become the not-so-United States.

The very frightening thing about this war is that it is so close we can see it from here. And entirely possible for all that. It’s a variation on the civil war in the darkly awesome book American War by Omar El Akkad, where the “reactionary” forces of the Old South have picked up the guns they are always afraid are going to be taken away from them and started a shooting war with what they see as the liberal-leftist North and Left-Coast West.

Unlike in American War, in this version, the so-called “Conservative” forces seem to be winning, if not all of the battles, at least the battle for hearts and minds in the North. It’s as though they made Robert E. Lee’s strategy work – just keep going long enough for the North to get too tired to fight.

This is also a scary close near future in that in 2016 Trump did get elected. Then after his administration overthrew as many of the civil rights of minorities as they could possibly manage, got replaced by the backlash of a progressive female Democratic president. After spending part of her first term turning back as much of the damage as possible, the folks who want their idealized 1950s back began the war in Oklahoma.

But this isn’t quite a dystopia, although it’s certainly getting there. Back home in Washington DC, away from the fronts in the states surrounding Oklahoma, the world seems to be going on as normal.

Unless you’re a wounded veteran trying to get the benefits you’re entitled to out of a VA that only cares about its bottom line.

Just as in the original stories, and in most of the remixes and pastiches, Watson is living off her military pension and needs a job. Holmes, in this case Sara Holmes, wants a roommate for the apartment she needs but claims to not be able to quite afford without said roommate.

But this Holmes is not what she seems. She’s every bit as brilliant (and enigmatic) as her original, but unlike the original Sherlock Holmes, Sara Holmes is not an independent agent.

Escape Rating A-: I’ve written a lot about the setup of this story, because a lot of this book is setup. While this world unfortunately feels like a logical extension of current events, it is not current events and needs to get us fixed firmly into its vision of the future.

Those roots in the contemporary present form a good part of the terrible case that Janet unearths and that Sara helps her resolve. Part of what makes this book an A- rather than a A is that the case was fairly obvious. All too plausible, but also all too easy to figure out from the very first clue.

What makes this story, this version of Holmes and Watson, so fascinating are the characters of the two women. Instead of two white men in Victorian England (or 21st century England, for that matter), the Holmes and Watson in A Study in Honor are two black women at a time and place where the hope for true equality that shone during the Obama era has receded into the past and is dying under the lash of “conservative” dog-whistles that are pitched so any human can hear. 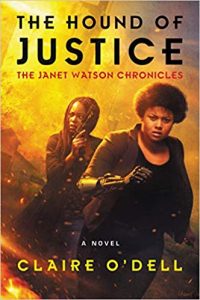 Which also means that in addition to the many indignities visited upon Janet Watson because she’s a wounded veteran, even more are heaped upon her because she’s black and because she dared to aspire to a profession that some people still believe should have been reserved for whites. And where the lesbianism of both of the protagonists just adds yet another layer of potential for prejudice.

A Study in Honor is a dark and gritty portrait of a world going to hell in a handcart, as seen from the perspective of someone who has visited that hell, and sometimes seems to have only left it in body but not in spirit. And investigates a mystery that plows right into the hell of that war and the dark heart of the people and governments that are waging it.

Watson and Holmes’ adventures continue in The Hound of Justice. I can’t wait.