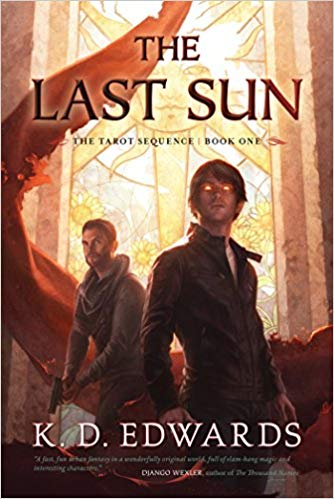 With his companion and bodyguard, Brand, he questions Addam's relatives and business contacts through the highest ranks of the nobles of New Atlantis. But as they investigate, they uncover more than a missing man: a legendary creature connected to the secret of the massacre of Rune's Court. In looking for Addam, can Rune find the truth behind his family's death and the torments of his past?

As I read The Last Sun, it kept teasing me with all the books it reminded me of – including one that I can’t quite remember. It’s on the tip of my tongue? The edge of my fingers? The corner of my mind? I can’t quite find the right metaphor – or the book – and it’s driving me bananas!

But while I was going bananas, I was also enjoying the hell out of The Last Sun – so much so that I kept wondering what took me so long. This is urban fantasy, just the way I like it. Or at least one of the ways I like it.

First of all, there’s the whole Atlantis crossed with Amber thing going on. Rune St. John, the last scion of the Sun Court, is a descendant of Atlantis. Yes, that Atlantis. This foundation on which this urban fantasy world rests is that Atlantis was real, and that its people – at least some of them – managed to escape its destruction.

Which doesn’t seem to be all that long ago. The Atlantis World War is still within living memory. Admittedly, the living memory of the extremely long-lived Atlanteans. But there are some in Rune’s generation who were born on the homeland, even if they don’t remember it all that well.

But the worlds are certainly equally as cutthroat and Machiavellian, and the courts are equally as decadent. Rune is the last Sun because his family was wiped out by a raid sanctioned and carried out by all of the other Houses. We meet Rune and his companion/bodyguard Brand as they are part of another sanctioned raid, this time conducted against the House of The Lovers.

You’ll need to check Wikipedia or something for a brief rundown of the Major Arcana of the Tarot – because it matters – a lot – in this story.

Like much of urban fantasy, The Last Sun is an exploration of this alternate contemporary Earth wrapped around a mystery and suffused with magic.

Rune Saint John operates as a private enquiry agent, sometime detective, sometime bodyguard, barely keeping his head above water financially – and every other way. His mentor/benefactor, The Tower (see what I mean about the Major Arcana?) hires him to find out what happened to Addam Saint Nicholas, one of the heirs of Justice. Addam has disappeared, but no one seems to be looking for him – not even his mother.

But then, Justice isn’t about protection. It’s about retribution. If something has happened to him, his mother will avenge him. Which is rather cold comfort – if you’re the person who isn’t dead, at least not dead yet.

The case, of course, is much more than it initially seems. The deeper that Rune digs into Addam’s family, friends and especially business associates, the more it seems that there’s something rotten at the heart.

Not Addam’s heart, but somebody’s heart. The question is who? Or, as Rune initially believes, what? When he discovers the what, he learns that too many things that were believed to be myths really aren’t. And everyone who believes that Rune isn’t anything but an example of a failed house learns that he is much more than he appears to be. Whether Rune manages to absorb that lesson for himself has yet to be seen.

Escape Rating A: I was just planning to read a couple more chapters last night. Instead, I lost all track of time and space and finished the book just before 3 in the morning. And WOW what a wild ride.

I found the initial premise interesting, but once I got really into the case, I was sucked in and stayed sucked.

Urban fantasy often rests on its portrayal of flawed, scarred protagonists who are as much antiheroes as they are heroes. Rune certainly fits right in beside the best of them. Something about Rune reminds me of the early Harry Dresden, and it’s not just that fire is the go-to spell for both of them.

Harry also begins his story at the thin edge of survival. He’s also been abused, and he’s also certainly been a victim. He has the capacity for great power, but he’s denigrated and underestimated at every turn – until he finally comes into his own. He’s also mostly unlucky in love. As is Rune, but with a difference. While Harry’s rather salacious male gaze of women starts to wear for many readers, Rune isn’t interested in women. All of his generally frustrated sexual attention is focused on men.

He’s just not mentally healthy enough to really get into a relationship with anyone at this stage of his journey. And the reasons for his shaky mental health are awful in their causes and reasonable in their results. In this, Rune reminds me an awful lot of Kai Gracen in Black Dog Blues.

But what makes Rune such an interesting character to follow is that he’s both an insider and an outsider at the same time. As the last scion of the Sun Court, he is literally the embodiment of that aspect of the Major Arcana – or he will be once he grows into his power. The Arcana are the highest of the high in New Atlantis – and in the rest of the world. If he lives long enough, Rune will be one of the great powers of his world.

But his house is impoverished and in disgrace. Rune himself is gossip-rag fodder at every turn. And he’s sunk so low that he actually has to work for a living – something that no scion of the Arcana is supposed to do. Or at least not supposed to HAVE to do.

So he’s seen the top, and he’s now on the bottom. But with his background and his legacy, he’s not really a part of either world.

And his life has made him all too aware of how often the ones who are closest to you are the ones who strike you down – usually from behind. Which makes him both an object lesson on how the mighty can fall and the messenger of the bad news that someone else has been betrayed by their nearest and dearest. 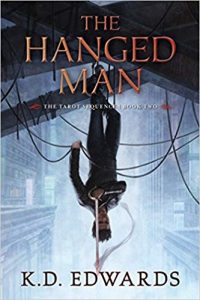 As Addam Saint Nicholas discovers. Once he’s found. And that’s just the beginning of the adventure.

The only good thing about having waited to read this book is that I have a much shorter wait for book 2 in the series. The Hanged Man is scheduled to come out in September. There are 22 cards in the Major Arcana, and if there’s a book for each of them, and the books are as good as this first one, I will be one very happy reader!

Review: Don’t You Forget About Me by Mhairi McFarlane
Review: Halo by Frankie Rose

2 thoughts on “Review: The Last Sun by K.D. Edwards”